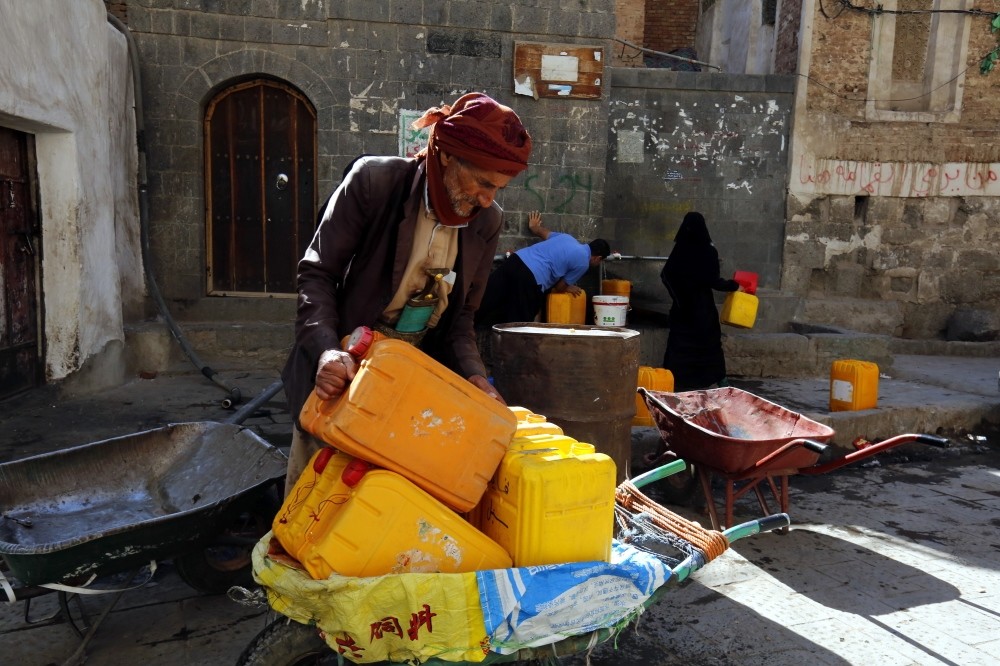 Yemenis fill jerry cans with drinking water from a donated source amid widespread disruption of water supplies in Sanaa, Dec. 9.
by Yusuf Selman İnanç Dec 11, 2018 12:00 am

Although it is the first time the warring parties in Yemen are holding direct talks since the war broke out, no solution to end the war is likely to be found as both sides are irreconcilable on core issues

The warring parties in Yemen are holding their first face-to-face talks in Sweden in order to find a solution to the problems that have pushed the country into a deadly war. These talks were held after a series of efforts by the international community, coupled with certain accelerating incidents, like the killing of the Saudi journalist, Jamal Khashoggi in the Saudi Consulate in Istanbul, which mounted the pressure on neighboring Saudi Arabia.

Nevertheless, there is not much hope since the parties are still at odds on core issues. Moreover, some worrying problems, such as the unprecedented humanitarian crisis, are not their main priority as those problems have existed since the war broke out in 2015.

The Shiite Houthi rebels, who are aligned with Iran, have seized several key cities across Yemen, including the previous capital Sanaa with the claim that the internationally recognized government was not functioning and violating their rights. In return, a Saud-led coalition, consisting of the Gulf countries with the exception of Qatar, was launched. With support from the U.S., the U.K. and the European Union, the coalition has pounded Houthi targets while carrying out ground operations in some areas.

The core issues are related to the control of pipelines and the strategic town of Hodeidah. Most of the pipelines are controlled by the Houthis while a few of them are still at the hands of the central Yemeni government. The control of the pipelines provides a strategic superiority as the country's energy needs are met through them. In addition, and more importantly, these pipelines are used to carry Saudi oil. Therefore, the kingdom does not want the Houthis to be in control of these pipelines. To this end, Saudi Arabia even declared its plan for the construction of a new pipeline at the end of last summer. Hodeidah is considered as important as the former issue. The town has strategic significance as it enables the rebels to receive aid from abroad. The town is located near the Red Sea opposite Eritrea. It is alleged that due to the lack of state authority in both Yemen's and Eritrea's coastal areas, it is easy to deliver weapons and other equipment. Houthi rebels have controlled Hodeidah since 2015.

When thought reversely, the humanitarian crisis is not a major issue for the parties. First, Yemen was already the poorest country in the region even prior to the war. Second, it is clear that both sides' motivations are not stimulated by any concern as such. As the talks continued, another striking report was released by U.N. agencies. The report claimed that "as many as 20 million Yemenis are food insecure in the world's worst humanitarian crisis." The joint report by the U.N. Food and Agriculture Organization (FAO), UNICEF and the World Food Program (WFP) added that 15.9 million are in dire hunger and 67 percent of the country's population suffers from food insecurity.