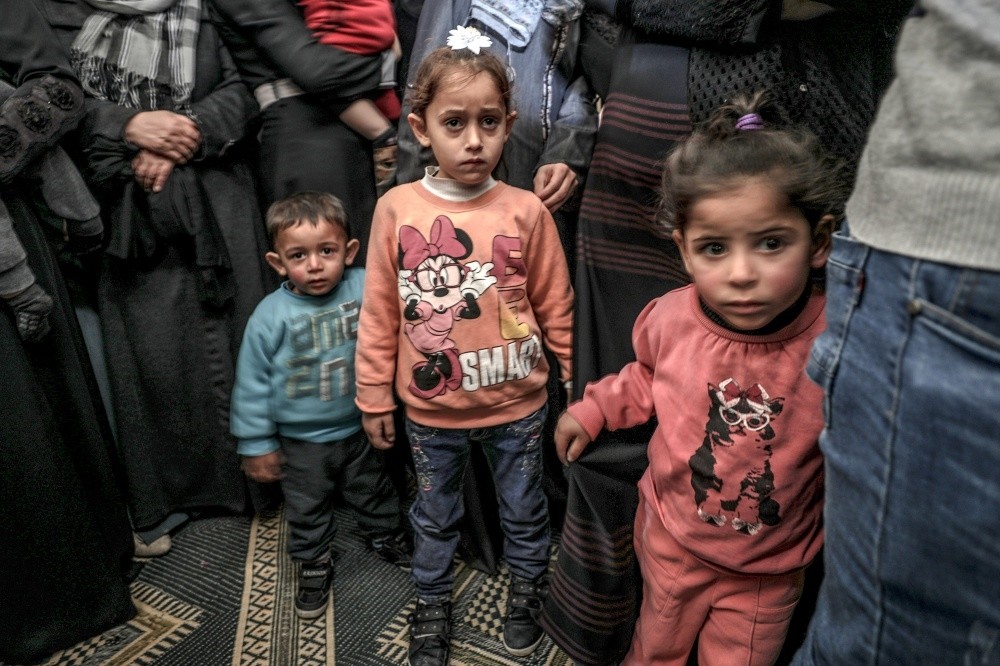 Palestinians child relatives of four-year-old Ahmed Abu Abed look on during his funeral at east Khan Younis town in the southern Gaza Strip, Dec. 12.
by Daily Sabah with Wires Dec 13, 2018 12:00 am

A four-year-old boy from Gaza has become the latest victim of the Israeli military's excessive use of force, including the use of live ammunition against Palestinians during a series of months-long border protests

A four-year-old Palestinian boy from Gaza died Tuesday from a shrapnel injury he suffered in an Israeli strike that also wounded other members of the child's family including his father. The latest incident revealed once again the Israeli military's use of excessive force, including live ammunition, against Palestinians.

The statement did not provide further details on how the child was injured. In the hospital where the boy died, 38-year-old Bassem told Agence France-Presse (AFP) he was the child's uncle. He said Abu Abed was injured by shrapnel when his father was shot during regular Friday protests along the border.

Ever since the demonstrations began in March, children have been a constant presence among the surging crowds. While many are brought by parents who hold their hands and carry them on their shoulders, others make their way on their own.

According to the United Nations, the months-long border protests have seen a staggering 948 Palestinians under the age of 18 shot and wounded by Israeli forces. Gaza's Health Ministry says 2,295 minors have been hospitalized, 17 of whom have had a limb amputated; at least 5,124 have been injured in all.

The Palestine Liberation Organization (PLO) earlier called on the International Criminal Court (ICC) to launch an investigation into the killings of Palestinian children by Israel, while urging the international community to "break their silence toward the incessant crimes committed by the occupation army."

Young victims are not a new phenomenon in the region. In the first Palestinian uprising that began in 1987, children and teens often threw stones at Israeli soldiers, who frequently responded with live rounds. According to the Israeli human rights group, B'Tselem, minors comprised about 21 percent of deaths back then. In the latest protests, that percentage is roughly the same.

The Great March of Return began when hundreds of thousands of Palestinian demonstrators converged on the buffer zone separating Gaza from Israel. Israel has responded to the rallies, still held every Friday, with deadly force, killing more than 235 Palestinians and injuring thousands more.

Israel was criticized by a U.N. human rights body for its killing of protesters in Gaza and for its treatment of Palestinians, declaring it a "war crime" under the Statute of Rome.

The high casualty toll triggered a diplomatic backlash against Israel and new charges of excessive use of force against unarmed protesters. Rights groups have branded open-fire orders as unlawful, saying they effectively permit soldiers to use potentially lethal force against unarmed protesters. In the face of growing criticism over Gaza border violence, the Israeli authorities earlier said that human rights laws do not apply to ongoing Palestinian protests along the Gaza Strip.