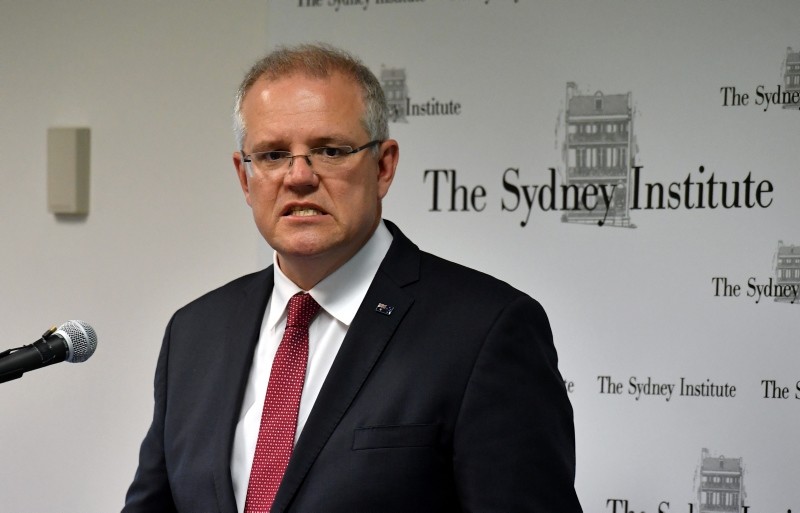 Australia has decided to formally recognize west Jerusalem as Israel's capital, but won't move its embassy until there's a peace settlement between Israel and the Palestinians, Prime Minister Scott Morrison announced Saturday.

Morrison said in a speech that Australia would recognize east Jerusalem as Palestine's capital only after a settlement has been reached on a two-state solution. The Australian Embassy won't be moved from Tel Aviv until such a time, he said.

While the embassy move is delayed, Morrison said his government would establish a defense and trade office in Jerusalem and would also start looking for an appropriate site for the embassy.

"The Australian government has decided that Australia now recognizes west Jerusalem, as the seat of the Knesset and many of the institutions of government, is the capital of Israel," Morrison said.

He said the decision respects both a commitment to a two-state solution and long-standing respect for relevant U.N. Security Council resolutions.

Australia becomes the third country to recognize Jerusalem as Israel's capital, following the U.S. and Guatemala.

Unlike its predecessors, however, Australia recognized only the western part of the city. The move, therefore, is unlikely to please either side entirely.

For the Palestinians, it offers a partial resolution to an issue that they believe should be resolved through negotiations. That decision is softened, though, by recognizing their claim to east Jerusalem.

The Israelis welcome recognition of Jerusalem as their capital, but the Australian decision falls far short of their claim to all of the city. Refusing to include east Jerusalem, home to the city's most important religious sites, is likely to upset Israeli nationalists who dominate Prime Minister Benjamin Netanyahu's coalition.

Israel's foreign ministry commended Australia's move as "a step in the right direction." In a statement, it also praised the Australian government's stance against anti-Semitism and its pro-Israel position at the U.N.

"The policies of this Australian administration have done nothing to advance the two-state solution," Erekat said in a statement, stressing the Palestinian view that the holy city remains a final-status issue in Israeli-Palestinian peace talks, which have run aground.

Morrison had earlier floated the idea that Australia may follow the contentious U.S. move of relocating its embassy to Jerusalem from Tel Aviv, but it was seen by many Australians as a political stunt. Critics called it a cynical attempt to win votes in a by-election in October for a Sydney seat with a high Jewish population.

The consideration had sparked backlash from Muslim-majority Indonesia and Malaysia, threatening a free trade deal that has now been delayed.

Opposition leader Bill Shorten said the decision to recognize west Jerusalem as Israel's capital but not move the embassy there was a "humiliating backdown" from the October by-election campaign.

"What I'm worried is that Mr. Morrison put his political interest ahead of our national interest," Shorten told reporters.

Israel captured east Jerusalem in the 1967 Mideast war and annexed it in a move that is not internationally recognized. Israel considers east Jerusalem an indivisible part of its capital, while the Palestinians seek the area, home to the city's most sensitive holy sites, as the capital of a future state.