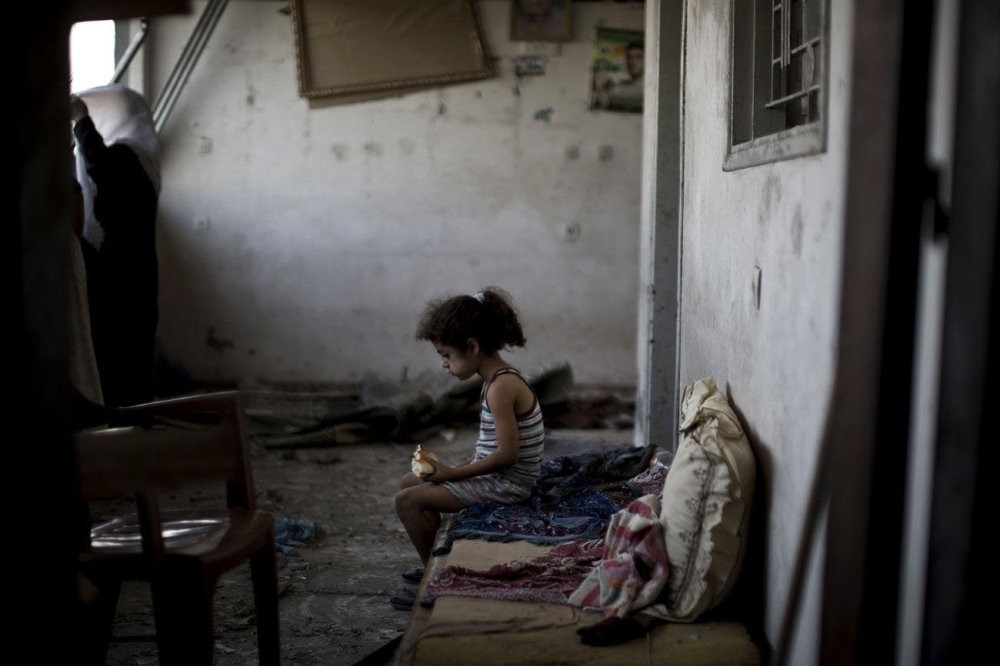 A Palestinian girl sits and eats in the rubble of her destroyed home, Gaza City.
by Compiled from Wire Services Dec 20, 2018 12:00 am

Despite international warnings of an ongoing humanitarian crisis in the occupied territories, thousands of impoverished Palestinians in Gaza and the West Bank are suffering drastic cutbacks in the level of food aid

The World Food Program (WFP) on Wednesday announced cuts in food aid to the Palestinian territories as of next year, a move that would affect tens of thousands of impoverished Palestinians in the occupied West Bank and the Gaza Strip.

The U.N. agency said it would, as of Jan. 1, suspend food assistance to 27,000 people in the West Bank. In addition, food aid to 165,000 people in the Israeli-occupied territory and in the Gaza Strip would be reduced by 20 percent.

"WFP has been forced, unfortunately, to make drastic cuts to the number of people that we support across Palestine, both in Gaza and the West Bank," Stephen Kearney, WFP country director in the Palestinian Territories, told Reuters. He said the agency was making the cutbacks "mainly because the amount of funding that we are receiving is dropping drastically.

"It's not just WFP, it's across the whole humanitarian community as donor contributions significantly fall," Kearney said, blaming the shortfall on cuts by the United States, WFP's biggest contributor, and other countries in aid to Palestinians.

The move came after the United Nations and the Palestinian Authority appealed on Monday for $350 million in aid for Palestinians next year, saying much more was needed but they had to be realistic after a year of funding cuts, especially by the Trump administration.

Kearney told Reuters that the WFP needs $57 million to maintain the current level of support for the benefit of 360,000 people in 2019. "The people that we do reach are the most vulnerable across Palestine, and we appreciate that we are going to put further anxiety on these families," he said.

Kearney said that while food aid was crucial in Gaza, the territory's underlying problems would remain as long as Israel maintained its blockade and Palestinian factional infighting continued, preventing any long-term political solution.

In September, the World Bank warned that the Gaza economy was in "free fall," calling on Israel and the international community to take immediate action to avoid "immediate collapse" in the Palestinian territory. According to the bank, unemployment is now over 50 percent and over 70 percent among Gaza's youth. The poverty rate in the Gaza Strip has reached 80 percent amid more than a decade-long Israeli blockade, according to the Palestinian General Federation of Trade Unions. Dozens of Palestinians have long demonstrated against high unemployment rates in the Gaza Strip, which has been reeling under a crippling Israeli blockade.

Palestinians have been protesting at least weekly along the Gaza border in what they call the "Great March of Return." Protesters are demanding an end to the blockade and for Palestinian refugees to be allowed to return to homes their families fled in the 1948 war surrounding Israel's creation. Friday's protests were bigger than those in recent weeks. At least 220 Palestinians have been killed since the protests began, while one Israeli soldier has been shot dead over the same period. Israel was criticized by a U.N. human rights body for its killing of protesters in Gaza and treatment of Palestinians, declaring it a war crime under the Statute of Rome. The high casualty toll triggered a diplomatic backlash against Israel and new charges of excessive use of force against unarmed protesters.