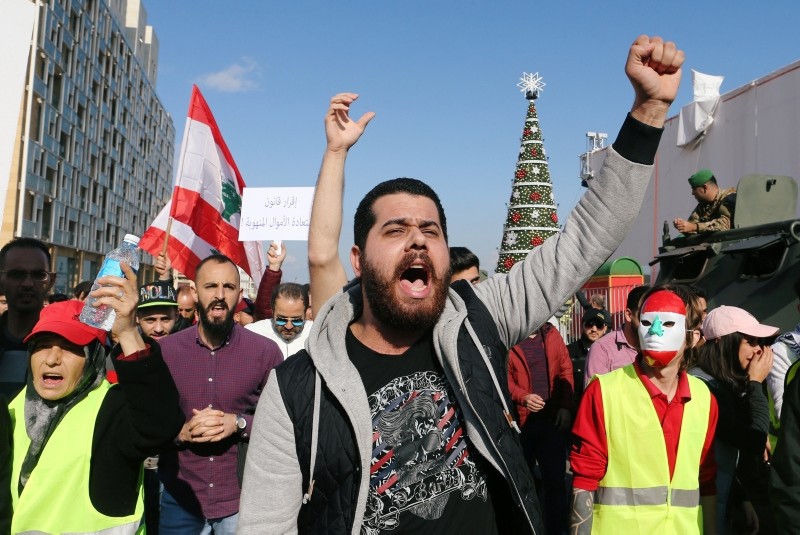 Hundreds of Lebanese protested against deteriorating economic conditions Sunday, with some briefly scuffling with army troops, as public anger mounts against politicians deadlocked over forming a new government since May.

The army appealed for calm in a statement, urging protesters to remain peaceful.

The protesters marched to the government building in central Beirut, carrying placards that called for an end to the deadlock and corruption. Some protesters sported the yellow vests worn by anti-government protesters in France. The call for the protests began on social media, with some using the symbol of a yellow vest with a cedar tree, a national symbol that appears on the country's flag.

Security forces deployed, setting up barricades separating them from the protesters in a standoff that locked down the city center. By mid-afternoon, the demonstration began to fizzle but scores of protesters marched to a commercial district in Beirut, chanting "revolution" and urging others to join them. Some protesters tried to block roads, using dumpsters and iron rods to stop traffic.

The army's statement said it would not tolerate attacks on public property.

Two local media outlets, Al-Jadeed TV and the Daily Star newspaper, said their reporters were attacked by security forces. Al-Jadeed said its cameraman's arm was broken and his camera smashed.

The scuffles in Beirut prompted a smaller, calmer solidarity rally in the southern town of Nabatiyeh.

Protests have spread in recent weeks as rival politicians have failed to form a new government under Saad Hariri's premiership following parliamentary elections in May.

Demonstrators chanted: "The people want to bring down the regime," a slogan from the 2011 Arab Spring uprisings.

The protesters, who said they didn't represent any particular political party, demanded improved health care, jobs and an end to corruption.

"We want a government," shouted one protester to a TV reporter.

"I am here to fight against the corruption of the state. We are here to bring back our social services. We need our rights. We need to live as human beings. We need that our government respects us," said Michel al-Hajj, another protester.

But politicians are divided, among other issues, over the war in neighboring Syria, often paralyzing decision-making in Lebanon.

"There is corruption and theft of state funds," 43-year-old Hana told AFP.

"We are governed by a political class of corrupt thieves who rule with sectarian fanaticism," she said.

Demonstrators demanded what they called their "most basic rights", including a reintroduction of housing loans stalled for nearly a year and more access to healthcare, water and electricity.

Dozens also demonstrated in the northern city of Tripoli.

Lebanon's economy is on the brink of collapse and France warned this month that the country could soon miss out on a much-needed aid program agreed in Paris earlier this year if the political deadlock continues.

Last month, Hariri, a Sunni Muslim backed by Saudi Arabia, blamed the Iranian-backed Shiite Hezbollah group for delaying the formation of the government.

The accusation came after Hezbollah chief Hassan Nasrallah insisted that several Sunni lawmakers loyal to the Shiite movement be added to the cabinet, thus boosting Hezbollah's influence in the group.

Under the Lebanese constitution, the president should be a Christian, the premier a Sunni Muslim, and the house speaker a Shiite Muslim.
Last Update: Dec 24, 2018 3:56 pm
RELATED TOPICS