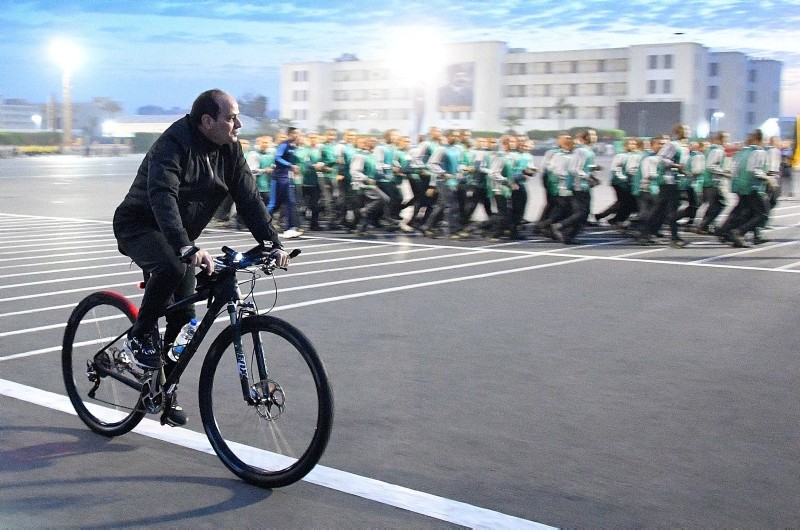 Egyptian President Abdel Fattah Al Sisi rides a bicycle during a follow-up on training and rehabilitation programs at the Military Academy in Cairo, Egypt, February 19, 2018 in this handout picture. (The Egyptian Presidency/Handout via Reuters)
by Compiled from Wire Services Dec 25, 2018 12:00 am

In televised comments earlier this month, Egypt's general-turned-President President Abdel-Fattah el-Sissi railed about the number of overweight people he sees and told Egyptians they must take better care of themselves.

When Health Minister Hala Zayed presented new numbers on the weight of Egyptians on Dec. 15, el-Sissi interrupted her. "Why are we doing this to ourselves?" el-Sissi asked from the audience, referring to Egypt's high obesity rate. He then spoke for almost 20 minutes about how Egyptians should exercise more.

He said physical education should become core curriculum at schools and universities and suggested TV shows shouldn't let presenters or guests on the air if they are overweight.

The next morning, before sunrise, he drove his point home by energetically cycling to the national military academy in a Cairo suburb. In black sweatpants, a dark top and a matching baseball hat, he told cadets that he was adamant they wouldn't leave basic training before fulfilling fitness requirements.

It was the typical style of el-Sissi, who sees even the smallest minutiae as needing his shaping and weighs in on anything from road building to filmmaking, often while scolding and haranguing Egyptians to correct their behavior.

El-Sissi, who has been pictured several times on his bike in sports gear, told a youth conference in November that too many students were overweight. At the same event, he triggered a social media backlash after telling citizens to "build (the) country" rather than fixating on sharply rising potato prices.

His words hit a nerve with citizens struggling to get by following austerity measures brought in under an IMF-backed economic reform program.

El-Sissi's critics said he was fat-shaming and taking an elitist approach to a problem whose roots lie to a large extent in poverty. They also criticized him for not offering concrete plans to combat obesity and spread fitness. Prices for food — particularly fruits and vegetables — have spiraled because of economic reforms introduced by el-Sissi, often making cheaper junk foods more appealing.

No one disputes that Egypt has a weight problem. One in three Egyptians suffers from obesity, the world's highest rate, according to a 2017 global study by the University of Washington's Institute for Health Metrics and Evaluation. It found 35 percent of adults — some 19 million people in the country of 100 million — are obese, again the world's highest rate, as well as 10.2 percent of Egyptian children, or around 3.6 million.

Of about 17 million Egyptians who had their height and weight measured in a hepatitis C campaign, around 75 percent were found to be overweight, Zayed said in her presentation.

The World Health Organization (WHO) says that 63 percent of Egyptians are overweight, including nearly 36 percent who are obese, one of the highest rates in the world.

El-Sissi, who often tells Egyptians they must buckle down and accept hardships to get through hard times, said they must change their habits to shed the fat.

"The second I walk into any place I look at things you cannot possibly imagine I would notice; and I ask myself 'what is this? Who are these people? Why are these people not looking after themselves?'" el-Sissi said in the Dec. 15 comments.

He derided Egyptians for not walking enough and, laughing, turned to his prime minister — seated next to him — and told him not to put on weight.

Egypt's pro-government media prominently trumpeted his comments. Parliament, packed by his supporters, has said it intends to introduce legislation making physical education part of the core curriculum at schools. Similarly, his education minister said students taking a 10-stop ride on the Cairo metro should get off two stops early and walk to their destination as a form of exercise.

In social media, possibly the only platform of relatively free speech left in Egypt, the response was more critical. Some said el-Sissi was removed from reality or speaks his mind without weighing his words first. A flood of jokes spilled forth on Twitter and Facebook, playing on the risks of being too fat under a president whose security forces have arrested thousands in a widespread crackdown against dissent.

One joke that went viral told of people in a car sucking in their bellies as they approached a police checkpoint. Another has a man asking to hide at a friend's house from police until he loses weight. In another, a man informs on his overweight wife to authorities on the phone.

Memes imagining a security crackdown on corpulence have multiplied. One pictured a woman being taken away by a police officer and telling him: "What's wrong? I only gained two kilos."

El-Sissi's comments "laid bare a great deal of elitism," said novelist and socio-political analyst Amar Ali Hassan. "They are symptomatic of an authoritarian ruler who's convinced he's on a mission, that he alone knows what is in the public interest while everyone else is ignorant of the lofty goals in his head."

In televised comments Wednesday, el-Sissi said "How can I shame my own family? Egyptians are my family. How can I watch them (putting on weight) and stay quiet?"

He noted the "incredible" number of jokes in response to his call and, chuckling, suggested people "take it easy with the jokes at my expense."

El-Sissi has presided over an unprecedented crackdown on dissent in recent years, and has often bristled at criticism.

Since taking office in 2014, el-Sissi has depicted himself as trying to refashion Egypt into a prosperous, stable and modern nation. But he has made sure there is no one influential or brave enough to question any of his policies or offer alternatives. He once angrily told Egyptians to listen to him alone and shouted down a lawmaker who suggested delaying the lifting of subsidies. This month, he declared he did not allow feasibility studies to be the deciding factor on the multi-billion-dollar projects he has embarked on.

Some of his policies have seen successes. The country is slowly recovering from the economic slump it suffered in the years after a 2011 uprising that toppled autocrat Hosni Mubarak. Security has improved.

But el-Sissi has also sought to quash any opposition, jailing thousands of Islamists along with secular pro-democracy activists, silencing critics in the media, reversing freedoms won in the 2011 uprising and winning a second term in office this year after authorities jailed potentially serious challengers or intimidated them out of the race.

Some longtime el-Sissi critics commended him for drawing attention to the need to fight obesity. But they pointed out that Egypt's poor majority cannot afford to eat healthy when a diet of sugar and carbs is cheaper.

"The president's concern with health and weight should not be taken against him," Negad Borai, a rights lawyer banned by authorities from travel, wrote on Facebook. "Poverty never stopped anyone from exercising."

Mohamed Zaree, another rights lawyer, said el-Sissi needs to enable Egyptians to lose weight rather than ordering them to exercise.

"He needs to make healthy food available at low prices, set up venues where people can exercise and allow emergency obesity operations to be performed under the cover of the state's medical care system," he said.

There is a clear correlation between poverty and obesity, the WHO says. Obesity can lead to non-communicable diseases, which account for most deaths in Egypt, WHO's Egypt office said.

"Most will understandably see the president's comments about the importance of losing weight as a way of deflecting concerns about the dramatic pace of inflation," said Timothy Kaldas, non-resident fellow at the Tahrir Institute for Middle East Policy.