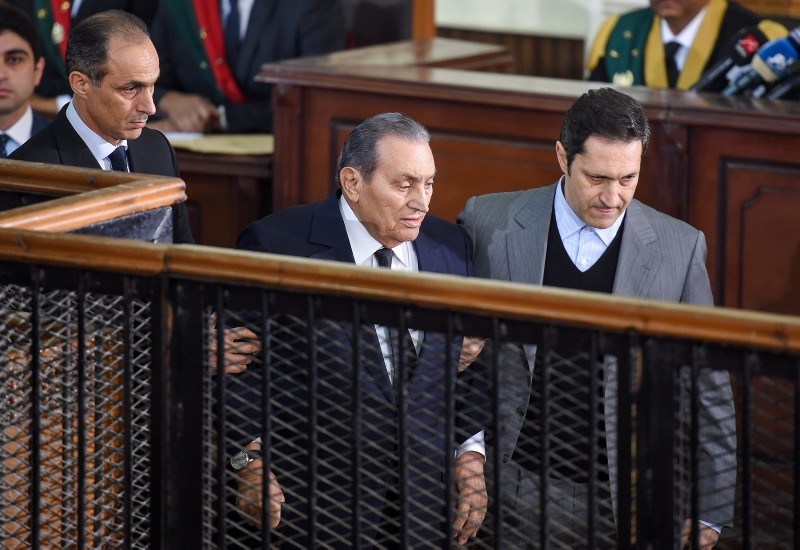 Former President Hosni Mubarak (C) is escorted by his two sons Alaa (R) and Gamal as he testifies during a session in the retrial of members of the now-banned Muslim Brotherhood at a make-shift courthouse in Cairo on Dec. 26, 2018. (AFP Photo)
by Compiled from Wire Services Dec 26, 2018 12:00 am

Two former Egyptian presidents have appeared in the same Cairo courtroom, with Hosni Mubarak testifying in a retrial of Mohammed Morsi.

The 90-year-old Mubarak, whose nearly three-decade rule was ended by a popular uprising in 2011, could be seen walking into the courtroom with a cane on Wednesday with his two sons, Alaa and Gamal, beside him.

Morsi, who became Egypt's first freely elected president the following year, was removed from power by the military in 2013 amid mass protests against his divisive rule. The jailed former leader now faces an array of charges in multiple court cases.

Wednesday's trial concerns a jailbreak staged by Morsi and other leaders of the Muslim Brotherhood group during the 2011 uprising.

Morsi and 26 other defendants face charges of premeditated and attempted murder as well as helping up to 20,000 people escape prison, including members of the Muslim Brotherhood, the Palestinian group Hamas and Lebanon's Shiite Hezbollah group.

Mubarak refused to answer most questions, saying he needs permission from President Abdel-Fattah el-Sissi and the military.

His lawyer, Farid al-Deeb, had told the Cairo Criminal Court that the former president was a member of the military and that he had to obtain permission from the Armed Forces to appear in court.

Earlier in the month, Mubarak failed to make a court appearance in the case.

Since Morsi's overthrow, Egyptian authorities have launched a relentless crackdown on dissent, killing hundreds of his supporters and sending thousands behind bars for inciting violence.