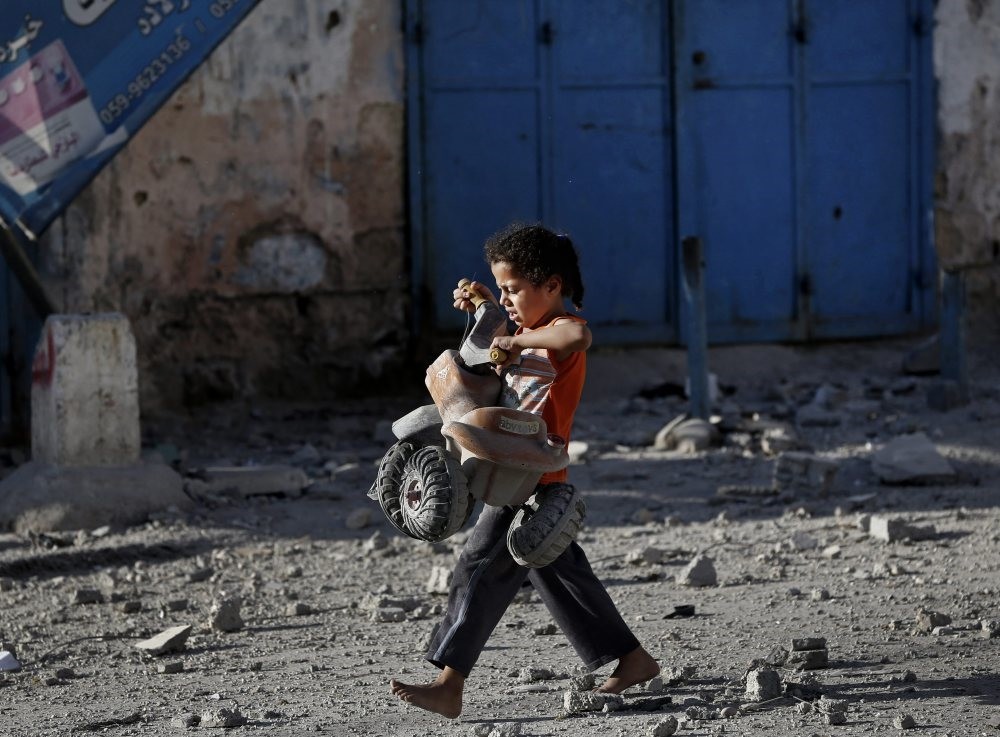 Under Prime Minister Benjamin Netanyahu's government, Israeli violence against Palestinians in the occupied territories has escalated with a series of devastating military operations which led to the killing of 3,316 Palestinians

Palestinians have been subjected to violence for years because of Israel's long-serving Prime Minister Benjamin Netanyahu's policies that crush aspirations in the occupied territories, as a central pillar of his electoral campaign.

Now that he decided to go to early elections in April amid series of corruption investigations, his premiership has been clouded by the Palestinian bloodshed.

According to B'Tselem, an Israeli rights group, a total of 3,316 Palestinians have been killed in the occupied West Bank and blockaded Gaza since 2009, including 775 children and 334 women.

Gaza has paid the heaviest price during Netanyahu's second, nine-year stint as premier. It was he who ordered Israel's devastating "Pillar of Defense" and "Protective Edge" operations in 2012 and 2014. 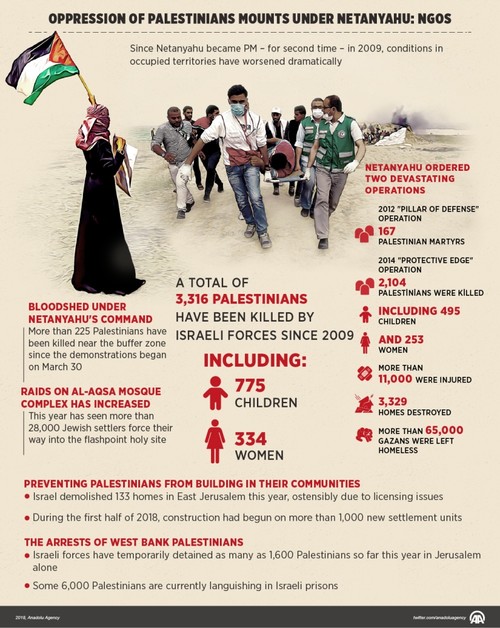 In November 2012, Israel launched Operation Pillar of Defense with a missile strike that kills a top Hamas commander in Gaza City. In the ensuing eight-day flare-up, 177 Palestinians were killed before an Egypt-brokered truce takes effect.

In July 2014, In July 2014, Israel opens Operation Protective Edge against the Gaza Strip. The weeks-long operation cost the lives of thousands while destroying infrastructure, medical facilities and schools.

According to U.N. figures, 17,200 homes were damaged or destroyed in Gaza's tiny and teeming enclave of two million people. It was also announced that 73 mosques and 24 schools were totally destroyed while thousands of buildings were damaged.

The Israeli incursion into Gaza that started on July 7 lasted 51 days, killed 2,158 civilians and more than 11,000 people were injured. Several rights groups completed their investigations and accused Israel of committing war crimes for using disproportionate or indiscriminate force and failing to prevent civilian deaths.

An Israeli investigation found 72 civilians were killed in an attack "mistakenly."

This year has seen yet more bloodshed under Netanyahu's command. In late March 2018, mass protests start along the Gaza-Israel border prompting a deadly response from the Israeli army. Since then, more than 225 Palestinians have been killed near the buffer zone, according to Gaza's Health Ministry.

Casualties reportedly include 42 children, four women, three medical workers and two journalists. More than 100 Palestinians have had to have limbs amputated after sustaining bullet injuries near the fraught buffer zone.

Within the same period, random airstrikes and tank shells have left another 14 Palestinians in Gaza dead. Israel has been criticized by a U.N. human rights body for its killing of protesters in Gaza and treatment of the Palestinians, declaring it as a "war crime" under the Statute of Rome.

Protesters demand the right to return to their homes and villages in historical Palestine, from which they were driven in 1948 to make way for the new state of Israel. They also demand an end to Israel's 12-year blockade of the Gaza Strip, which has gutted the coastal enclave's economy and deprived its roughly two million inhabitants of many basic commodities.

Under Netanyahu, the pace of Israel's illegal settlement building in the West Bank and east Jerusalem has accelerated. Netanyahu stepped up settlement construction in east Jerusalem after U.S. President Donald Trump officially recognized Jerusalem as Israel's capital earlier this year. In September, Peace Now, an Israeli rights group, noted that, during the first half of 2018, construction had begun on more than 1,000 new settlement units, easily outstripping last year's figure. In addition, the Israeli government has also continued preventing Palestinians from building in their communities in east Jerusalem. According to a report released by the U.N. Office for the Coordination of Humanitarian Affairs (OCHA), Israel demolished 133 homes in east Jerusalem this year. Meanwhile, in the occupied West Bank, the arbitrary arrest of Palestinians ha

s also continued unabated. According to the Committee for the Families of Prisoners, a nongovernmental organization, Israeli forces have temporarily detained as many as 1,600 Palestinians so far this year in Jerusalem alone. These reportedly include about 400 children, 30 of whom are under 14 years old. According to official Palestinian sources, some 6,000 Palestinians are currently languishing in Israeli prisons, including 52 women, 270 minors, and six Palestinian lawmakers.