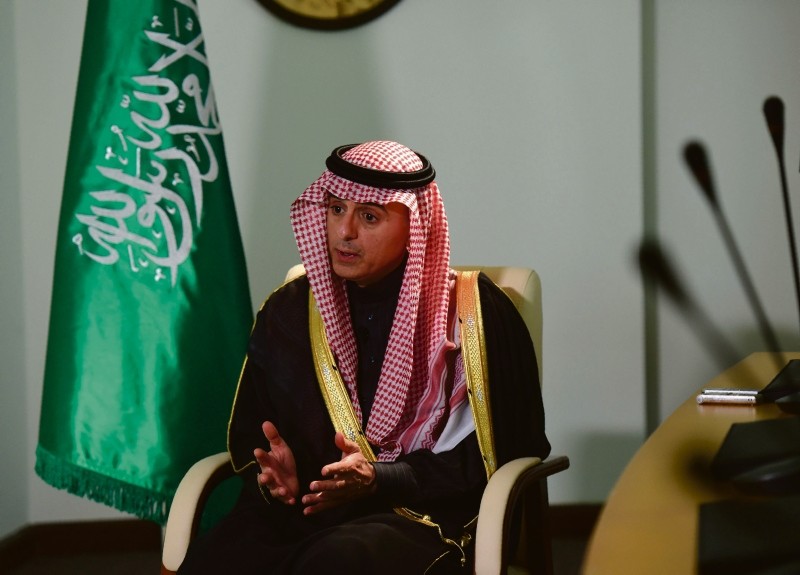 This file photo shows Saudi Minister of Foreign Affairs, Adel al-Jubeir, giving an interview to AFP at his ministry in the capital Riyadh on Feb. 18, 2016. (AFP Photo)
by Compiled from Wire Services Dec 27, 2018 12:00 am

Al-Jubeir, the soft-spoken foreign minister since 2015, will be demoted to minister of state for foreign affairs. Al-Assaf had been serving as minister of state and has held a seat on the boards of oil-giant Saudi Aramco and the kingdom's sovereign wealth fund, the Public Investment Fund.

Meanwhile, Prince Abdullah bin Bandar— the son of Prince Bandar Al Saud who once served as Saudi ambassador to Washington— was named head of the National Guard. The force is tasked primarily with the protection of the Al Saud ruling family. Prince Abdullah had been deputy governor of Mecca.

Some provincial governors have been replaced in the reshuffle, according to the royal decrees that gave no explanation for their sackings.

One significant change impacts a close aide of the crown prince, Turki al-Sheikh, who was named as head of the kingdom's General Entertainment Authority, a body created in recent years to help organize and promote concerts and other events that had long been banned in the conservative country.

Al-Sheikh, who is known to be close to the crown prince, was replaced as head of the Sports Authority by Prince Abdulaziz bin Turki al-Faisal.

Al-Sheikh's appointment as head of entertainment means he no longer oversees a cybersecurity and programming body that was led by Saud al-Qahtani, a close aid to the crown prince who was fired from his post and sanctioned by the U.S. Treasury Department for helping to mastermind the plot in Istanbul that led to Khashoggi's killing.

Khashoggi, a critic of the crown prince, was killed and dismembered by a team of Saudi agents in the Saudi consulate in Istanbul on Oct. 2.

The outrage over the killing of journalist Jamal Khashoggi in Saudi Arabia's Consulate in Istanbul has increased scrutiny on Riyadh's role in conflicts in the region, potentially giving Western powers, which provide arms and intelligence to the Saudi-led coalition, greater impetus for action.

Saudi Arabia denies the crown prince knew of the plot. He's been supported by President Donald Trump who has touted U.S.-Saudi ties. The U.S. Senate, however, passed a unanimous resolution saying it believes the crown prince is to blame for the murder. His critics point to U.S. intelligence reports and say an operation like this could not have happened without his knowledge.