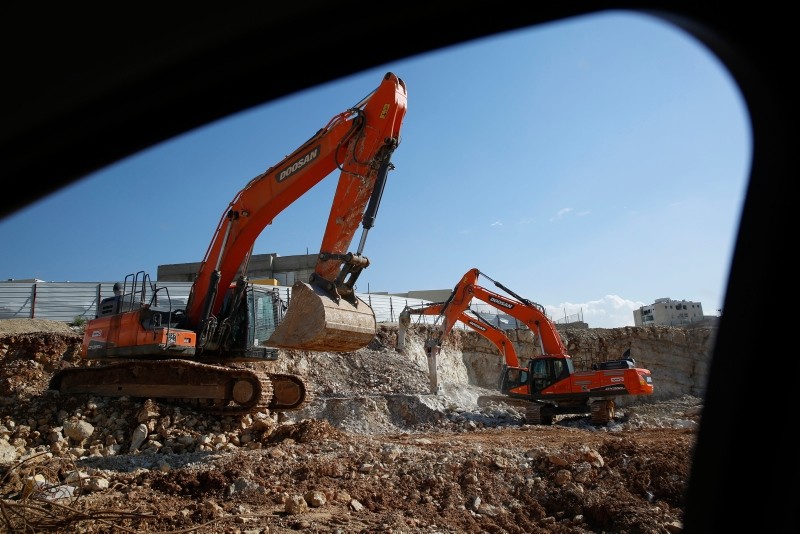 With little resistance from a friendly White House, Israel has launched a new settlement push in the West Bank since U.S. President Donald Trump took office, laying the groundwork for what could be the largest construction binge in years, according to data obtained by The Associated Press.

The figures, gathered from official government sources by the anti-settlement monitoring group Peace Now, show an increase in building in 2018 and a sharp spike in planning for future construction.

This trend, highlighted last week when an Israeli committee advanced plans for thousands more settlement homes on war-won lands, has only deepened Palestinian mistrust of the Trump administration as it says it is preparing to roll out a Mideast peace plan. Each new settlement expansion further diminishes the chances of setting up a Palestinian state alongside Israel.

Both supporters and opponents of settlements confirm a change in atmosphere since early 2017, when Trump took over from Barack Obama, whose administration had tried to rein in construction.

"The feeling of the (Israeli) government is everything is allowed, that the time to do things is now because the (U.S.) administration is the most pro-settlement you can ever have," said Hagit Ofran of Peace Now's Settlement Watch program.

Peace Now uses several measurements of settlement activity. These include "plans," or the early bureaucratic stages of preparing a project; "tenders," when bids are solicited from contractors to do the work; and "construction starts," when the building actually begins.

Each of these figures tells a different story. While construction starts give a snapshot of the current level of settlement activity, they reflect decisions made years ago. In contrast, the planning and tender stages are seen as forward-looking indicators of a government's intentions.

The data compiled by Peace Now showed a drop in construction starts during Trump's first year in office, to 1,643 units in 2017 from 3,066 units the previous year. This drop appears to reflect the lingering effect of reduced planning during the final two years of the Obama administration.

But the data for the first nine months of 2018 indicate the beginning of a Trump effect, with construction starts 20 percent higher than the same period a year earlier.

These trends are even more evident when looking at the planning process. In 2017, plans were advanced to build 6,712 new settlement homes, roughly 2.5 times the 2016 level.

In 2018, plans for an additional 5,618 units were advanced, nearly half of which were processed last week alone. Together, these numbers are the highest level of planning seen since 2013. At that time, Israel pushed forward settlement construction to counter criticism of its release of Palestinian prisoners as part of then-Secretary of State John Kerry's peace efforts.

The biggest surge in settlement activity during the Trump era is in tenders— projects that are ready to be launched.

In 2017, 3,154 tenders were issued, up from just 42 during Obama's final year in office. In 2018, that number rose to over 3,800, the highest number by far since Peace Now started compiling the data in 2002. This sets the stage for a huge jump in construction in the near future.

Revivi said that Obama pressured Israel into greatly curtailing settlement activity. Now, he said, Israel is trying to make up for lost time.

"Basically what you're seeing now is the statistics are trying to catch up to the needs that were built up during the eight years of the Obama administration, when everything was in a standstill," Revivi said.

Settlements are one of the most heated issues in efforts to restart Israeli-Palestinian peace talks, frozen since 2014. The international community regards all Israeli settlements in occupied Palestinian territories to be illegal and a major obstacle to Middle East peace. The area, captured by Israel in 1967, is not sovereign Israeli territory and Palestinians there are not Israeli citizens and do not have the right to vote.

Over 400,000 Israelis now live in the West Bank, in addition to 200,000 in east Jerusalem. The Palestinians seek both areas, captured by Israel in 1967, as parts of their state. They have also long argued that Israeli settlements could deny them a viable and contiguous state.

For decades, a string of U.S. presidents, both Republican and Democrat, condemned settlement construction.

Things quickly changed when Trump took office. Trump refused to condemn settlement construction and surrounded himself with advisers — including his son-in-law Jared Kushner and Ambassador to Israel David Friedman — who are Orthodox Jews with close ties to settlements. Trump at times has asked Israel to show restraint, but his administration has remained largely silent as Israel has pressed ahead with its construction efforts over the past two years.

This has been welcome news to Prime Minister Benjamin Netanyahu, whose outgoing coalition is dominated by religious and nationalist settlement sympathizers. Favored to win re-election in April, Netanyahu has said he expects his next government to look very similar.

Israel never annexed the West Bank, meaning the Israeli military remains the sovereign there. Construction in the West Bank requires approval from COGAT, a Defense Ministry body that oversees civilian affairs in the territory.

Plans are submitted by the government to COGAT's Higher Planning Council, which decides if they meet legal criteria.

COGAT routinely portrays decisions on new settlement activity as a technical matter, playing down the political impact. In a statement, COGAT said it acts in accordance with planning and building laws in the West Bank.

Critics say COGAT routinely promotes settlement expansion and development at the expense of Palestinian communities in the 60 percent of the West Bank that is under full Israeli control. Palestinians have varying degrees of autonomy, including over building permits, in the remaining areas of the West Bank, where most Palestinians live.

The offices of Avigdor Lieberman, who served as defense minister in 2017 and 2018, and his deputy, Eli Ben Dahan, did not respond to requests for comment. Both are strong supporters of the settlements and settlers themselves.

The settlement surge has added to the Palestinians' distrust of the White House. The Palestinians cut off ties with the administration over a year ago after Trump recognized contested Jerusalem as Israel's capital. President Mahmoud Abbas has said he will reject any peace plan the Trump team presents.

Abbas' spokesman, Nabil Abu Rdeneh, said U.S. "silence and lack of condemnation and pressure" have given a "green light" to the Israeli government to step up settlement activity.