Pompeo calls for Mideast to reunite against Iran, pins blame on Obama for bloodshed 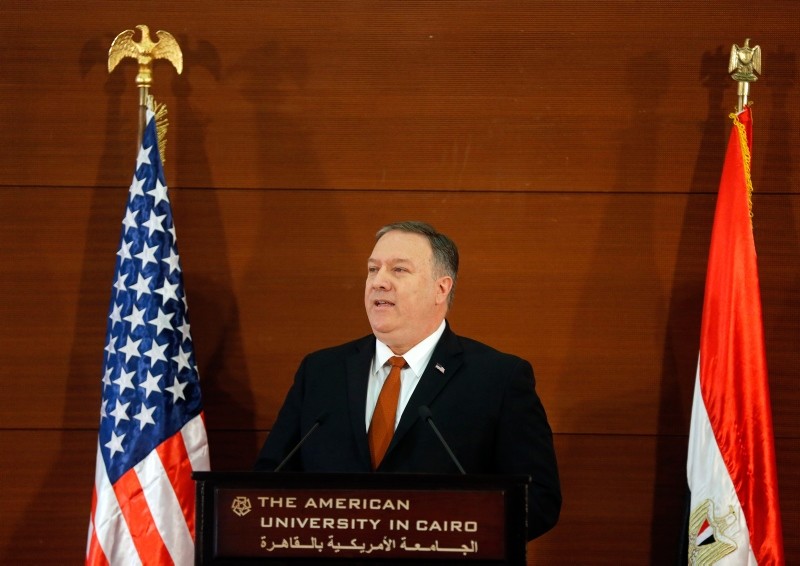 U.S. Secretary of State Mike Pompeo called Thursday for an end to Middle East rivalries to roll back Tehran's influence and vowed to "expel every last Iranian boot" from Syria.

"It's time for old rivalries to end, for the sake of the greater good of the region," Pompeo said in a speech in Cairo during a Middle East tour to reassure allies about U.S. plans to withdraw troops from Syria.

The U.S. "will use diplomacy and work with our partners to expel every last Iranian boot" from Syria and will bolster efforts "to bring peace and stability to the long-suffering Syrian people," he said.

Pompeo delivered a scathing rebuke of the Obama administration's Mideast policies on as he denounced the former president for "misguided" and "wishful" thinking that diminished America's role in the region, harmed its longtime friends and emboldened its main foe: Iran.

"In falsely seeing ourselves as a force for what ails the Middle East, we were timid about asserting ourselves when the times — and our partners — demanded it," Pompeo said, without mentioning the former president by name.

Pompeo blamed the previous administration's approach to the Mideast for the ills that consume it now, particularly the rise of the Daesh in Iraq and Syria and Iran's increasing assertiveness, which he said was a direct result of sanctions relief, since rescinded by the Trump administration, granted to it under the 2015 nuclear deal.

He criticized Obama for ignoring the growth of the Iranian-backed Hezbollah movement in Lebanon to the detriment of Israel's security and not doing enough to push back on Iran-supported rebels in Yemen.

Since Trump's election, however, Pompeo said this was all changing.

"The good news is this: The age of self-inflicted American shame is over, and so are the policies that produced so much needless suffering," he said. "Now comes the real 'new beginning.' In just 24 months, actually less than two years, the United States under President Trump has reasserted its traditional role as a force for good in this region, because we've learned from our mistakes. We have rediscovered our voice. We have rebuilt our relationships. We have rejected false overtures from enemies."

Pompeo's speech came on the third leg of a nine-nation Mideast tour aimed at reassuring America's Arab partners that the Trump administration is not walking away from the region amid confusion and concern over plans to withdraw U.S. forces from Syria.

Pompeo said Trump's decision was final and U.S. would withdraw from Syria but Washington would not hesitate to strike if Assad regime used chemical weapons again.

"The Trump Administration didn't stand idly by when Bashar Assad used chemical weapons against his people. President Trump unleashed the fury of the U.S. military not once, but twice, and with allied support. And he is willing to do it again, although we hope we won't have to," Pompeo said.