US to hold international Middle East summit in Poland next month, Pompeo says 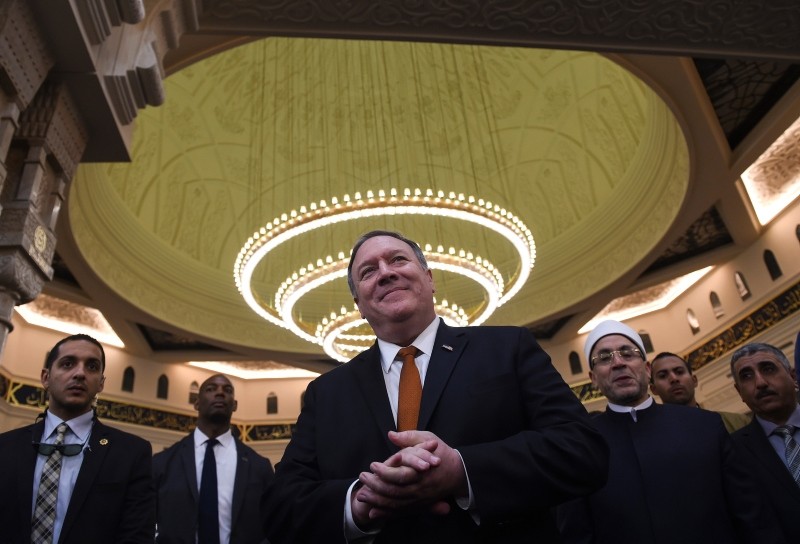 US Secretary of State Mike Pompeo speaks to the press in the newly inaugurated Al-Fattah Al-Alim Mosque, in Egypt's New Administrative Capital, east of Cairo, Thursday, Jan. 10, 2019. (AP Photo)
by Compiled from Wire Services Jan 11, 2019 12:00 am

The United States plans to host a global summit focused on the Middle East, particularly Iran, next month in Poland, U.S. Secretary of State Mike Pompeo told Fox News in a report published on Friday.

In an interview with the news network, Pompeo said the international gathering would be held Feb. 13 to Feb. 14 in Poland to "focus on Middle East stability and peace and freedom and security here in this region, and that includes an important element of making sure that Iran is not a destabilizing influence."

Pompeo on Friday arrived in Bahrain, the first leg of a tour of Gulf states which Washington says are "critical" to confronting Iran and terrorists. The top U.S. diplomat flew to capital Manama from Egypt's Cairo and has already visited Amman, Baghdad and the Iraqi Kurdish regional capital of Irbil. He will also visit the other five members of the Gulf Cooperation Council — the United Arab Emirates, Qatar, Kuwait, Oman and Saudi Arabia.

Pompeo is expected to call for increasing pressure on Iran and push for unity among Gulf neighbors still embroiled in a festering dispute with Qatar. He'll also be promoting a U.S.-backed initiative to form what some have termed an "Arab NATO" that would bring the region together in a military alliance to counter threats from Iran.