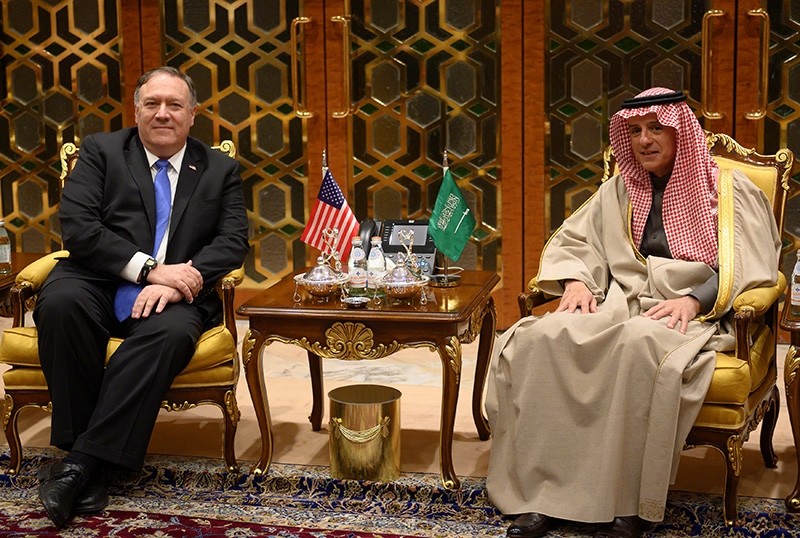 U.S. Secretary of State Mike Pompeo on Sunday arrived in Riyadh, where he is set to ask Saudi Crown Prince Mohammed bin Salman to ensure the killers of journalist Jamal Khashoggi are held accountable.

The top U.S. diplomat, on an extensive Middle East tour, embarked on his second politically sensitive visit to Saudi Arabia since Khashoggi's murder inside its Istanbul consulate sparked an international outcry.

"We will continue to have a conversation with the crown prince and the Saudis about ensuring the accountability is full and complete with respect to the unacceptable murder of Jamal Khashoggi," Pompeo told reporters in Qatar, before flying to Riyadh.

"So, we'll continue to talk about that and make sure we have all the facts so that they are held accountable, certainly by the Saudis but by the United States as well."

Pompeo's visit to Saudi Arabia, where he will be hosted by Prince Mohammed, is part of an extensive eight-day trip to Amman, Cairo, Manama, Abu Dhabi, Doha, Riyadh, Muscat, and finally Kuwait City.

Khashoggi was killed on Oct. 2 in a case which stunned the world and threatened a serious rift between Riyadh and Washington.

The journalist was murdered and his corpse dismembered inside the kingdom's Istanbul consulate.

Evidence subsequently emerged that the killing was carried out by a team of Saudis sent from Riyadh and closely linked to the crown prince. Washington has demanded a transparent investigation.

Riyadh prosecutors have announced indictments against 11 people, and are seeking the death penalty against five of them.

But Prince Mohammed, whose right-hand aides were allegedly involved in the murder, was exonerated by prosecutors despite U.S. intelligence reportedly having evidence he was behind it.

On a previous visit to Riyadh at the height of the Khashoggi affair, Pompeo's broad smiles with the crown prince outraged some Americans.

However, U.S. President Donald President Trump has said Washington wants to preserve the alliance with the kingdom, although the US Senate has clearly blamed Prince Mohammed for the murder.

Washington is eager for regional unity to gain widespread support its fight against Iran.

Pompeo refused on Sunday to comment on reports Washington had recently considered military action against Tehran.