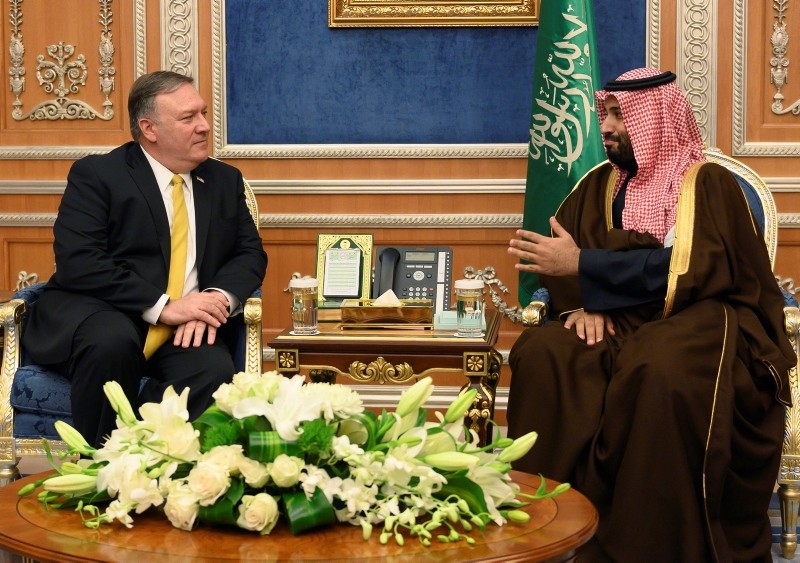 U.S. Secretary of State Mike Pompeo and Saudi Arabia's Crown Prince Mohammed bin Salman agreed Monday on the importance of a de-escalation in military operations in Yemen amid United Nations peace efforts to the end the conflict.

"On #Yemen, agreed on need for continued de-escalation and adherence to Sweden agreements, especially cease-fire and redeployment in #Hudaydah," the U.S. embassy in Riyadh tweeted after a meeting between Pompeo and the prince.

Pompeo met with Saudi King Salman and crown prince on the latest stop of his Middle East tour that has so far been dominated by questions and concerns about the withdrawal of U.S. troops from Syria.

Speaking with senior Saudi officials on his arrival in Riyadh late Sunday, Pompeo stressed the importance of supporting a political solution to end Yemen's civil war and "the need for continued regional efforts to stand against the Iranian regime's malign activity and to advance peace, prosperity, and security," the State Department said.

Yemen's four-year conflict pits the internationally recognized government, backed by a coalition led by Saudi Arabia and the United Arab Emirates, against the Houthi rebels who are aligned with Iran.

The fighting has killed tens of thousands of people, and has driven millions to hunger. The U.N. calls it the world's worst humanitarian disaster.

A cease-fire went into effect on December in Yemen's port city of Hodeida after a truce agreement was reached a week prior at U.N.-brokered talks in Sweden.

But the truce in the Red Sea city remains fragile as both side accuse each other of unprovoked attacks. Just last week a bomb-laden drone launched by rebels exploded over a military parade for the Saudi-led coalition, killing at least six people.

The conflict has caused a humanitarian catastrophe. Emaciated children are being brought to overwhelmed clinics, and in some areas families are surviving off leaves boiled into a sour green paste. The fighting and displacement have also generated a cholera epidemic.

U.N. Secretary-General Antonio Guterres warned Sunday that if Yemen's humanitarian situation does not improve, 14 million people will be in need of food aid in 2019, 6 million more than the last year.

Last week, an international group tracking Yemen's civil war reported that the conflict has killed more than 60,000 people, both combatants and civilians, since 2016. That is much higher than the U.N. figure of 10,000 civilian deaths, and has added to the urgency to find a political resolution.