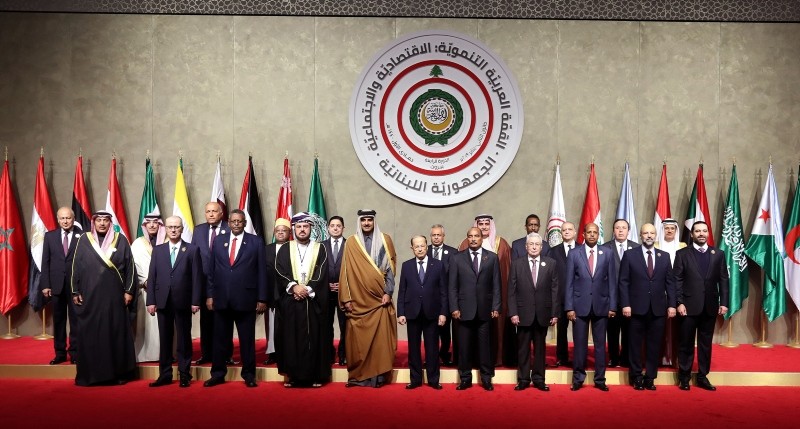 Lebanon used an Arab economic summit on Sunday to call for the return of Syrian refugees to safe areas of their war-torn country, where the nearly eight-year civil war is still underway despite a recent series of regime victories.

It also proposed the creation of an Arab bank to finance reconstruction in Arab countries devastated by conflicts such as Syria and Yemen.

President Michel Aoun made the calls at the opening of the fourth annual Arab Economic and Social Development Summit, which was marred by the glaring absence of most Arab heads of state.

"Lebanon calls on the international community to make all efforts possible and provide suitable conditions for a safe return of displaced Syrians... without linking that to a political solution," Aoun said.

The meeting is the first economic and development summit to be held since 2013, and comes as Syria, Yemen and Libya remain gripped by violence and Iraq confronts a massive reconstruction challenge after its costly victory over Daesh terror group.

There are currently 5.6 million Syrian refugees living in the region, including around one million born into displacement, according to the UN refugee agency UNHCR.

Lebanon hosts some 1.5 million Syrians who have fled the civil war raging across the border.

Most live in extreme poverty, according to aid agencies, and have placed an extra burden on Lebanon's fragile economy.

Despite some returns to slivers of Syria, the United Nations says the country as a whole remains still unsafe for civilians to return to.

The refugee issue was to be one of the main points on the agenda of this year's summit, and Aoun said he had put forward measures that would ease their return.

The "establishment of an Arab bank for reconstruction and development" of Arab countries devastated by conflict, would be one of them, he said.

Arab League Secretary-General Ahmed Aboul-Gheit said nearly half of all refugees "come from our Arab world."

Qatar's ruler attended the summit, which has been marred by divisions over readmitting Syria to the Arab League. But Sheikh Tamim bin Hamad Al Thani arrived shortly before the summit and left minutes after it began.

Qatar has been one of the main backers of Syrian opposition trying to overthrow Bashar Assad.

The United Arab Emirates and Bahrain have reopened their embassies in Damascus.

Organized by the Arab League, the summit is attended by only three Arab leaders; Lebanon's Aoun, Sheikh Tamim and Mohamed Ould Abdel Aziz of Mauritania.

Most Arab states are represented at the summit by delegations at the ambassadorial level. Syria, whose Arab League membership has been suspended since 2011, and Libya are not taking part in the meeting.

The other leaders' absence appeared to be a snub to Lebanon, where groups led by the Iranian-backed Hezbollah had insisted that Assad should be invited.

Aoun expressed his "regret" that most Arab heads of state had failed to attend the summit, saying they had "no excuse for their absence."

Lebanese politicians have stepped up calls for refugees to go home now that the Assad regime has recovered control over most of the country with Russian and Iranian help.

Hezbollah, which fights alongside Assad, and its political allies including Aoun have urged rapprochement with Damascus. Other politicians oppose this, insisting the United Nations must oversee any repatriations.

A key point of contention ahead of the summit has been whether to bring Syria back into the Arab League, more than seven years after its membership was suspended.

Aoun said he had hoped the summit would be a chance "to bring together all the Arabs and that there would be no empty seats... but the obstacles were unfortunately stronger."

In December, Sudan's President Omar al-Bashir made the first visit by any Arab leader to the Syrian capital since 2011, and the United Arab Emirates reopened its embassy in Damascus after closing it in 2012.