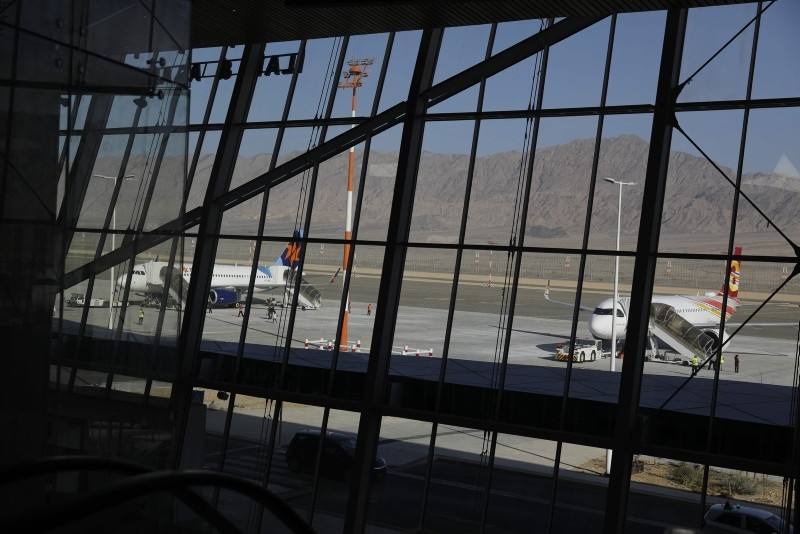 Planes are reflected in the facade of the Ramon International Airport after an inauguration ceremony for the new airport, just outside the southern Red Sea resort city of Eilat, Israel January 21, 2019. (Reuters Photo)
by Jan 21, 2019 7:25 pm

Israel inaugurated a new international airport at a southern port close to its border with Jordan on Monday, triggering protests from authorities in Amman over potential violations of aviation standards.

The airport is close to the country's Red Sea resort city of Eilat and is meant to replace a smaller hub located in the city's centre.

It violates "international standards regarding the respect for the sovereignty of the airspace and territories of other countries," Misto said.

"The decision to operate the airport should not be a unilateral decision," Jordan's aviation commission said.

Speaking at the inauguration ceremony, Prime Minister Benjamin Netanyahu said the airport will "reinforce the unprecedented blossoming in our international relations."

"This is a huge change in Israel's accessibility and international status," Netanyahu said, pointing to the country's "growing cooperation" with countries in Asia, Africa, the Arab world and the Muslim world.

The airport was named after Ilan Ramon, Israel's first astronaut who was killed in the February 2003 Columbia space shuttle disaster. It is also named for his son Assaf Ramon, who died six years later in a training crash.

Domestic flights will begin operating in February, and international flights will start at the end of March, according to Israeli daily Haaretz.

The airport will serve as an alternative to Ben Gurion during emergency times, severe weather conditions and security unrest.

Ramon Airport, installed with the state-of-the-art technologies, cost some 1.7 billion NIS (some 460 million dollars) to construct, according to Israel's Transportation Ministry.

The terminal can accommodate more than 2 million passengers per year, the ministry said.