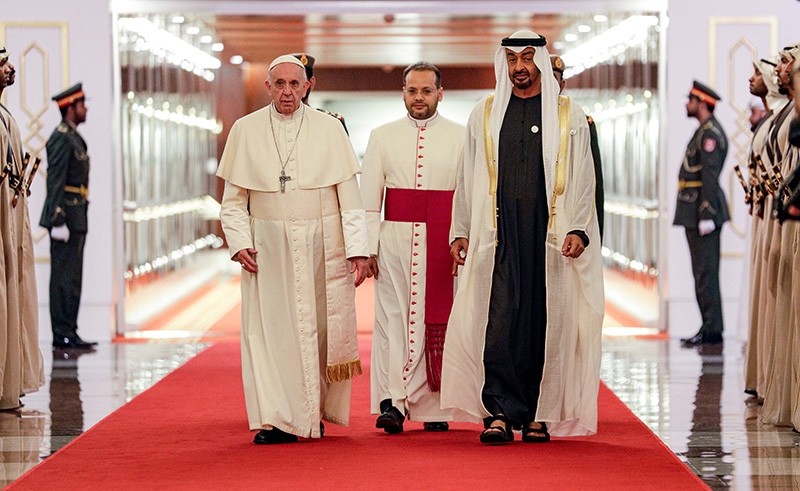 Pope Francis landed in the United Arab Emirates on Sunday for the first ever visit by a pontiff to the Arabian Peninsula -- the birthplace of Islam.

The pope touched down in Abu Dhabi for the 48-hour trip during which he will meet leading Muslim clerics and hold an open-air mass for some 135,000 Catholics.

The pontiff will take part in an interreligious conference on Monday, meeting Sheikh Ahmed al-Tayeb, the imam of Cairo's Al-Azhar, Sunni Islam's prestigious seat of learning.

Hours before he flies back to Rome on Tuesday, he will lead mass in a stadium in Abu Dhabi -- set to be the largest gathering ever in the UAE, according to local media.

Francis earlier Sunday called for the urgent observation of a limited cease-fire in Yemen reached in December and for food and medicine to get to its people, who are suffering the world's worst humanitarian crisis.

"The population is exhausted by the long conflict and many, many children are suffering from hunger but they are not able to get to food deposits. The cry of these children and their parents rises up to God," he told tens of thousands of people in St. Peter's Square during his regular Sunday address.

"I appeal to all sides involved and to the international community to urgently press for respect of the agreements that have been reached, to guarantee the distribution of food, and work for the good of the population."

"There are children who are hungry, they are thirsty, they don't have medicine," he added.

The UAE has played a leading role in the Saudi-led military coalition waging a nearly four-year war against the Iran-aligned Houthi movement in Yemen in a conflict which has pushed the poorest country on the peninsula to the brink of famine.

Francis is traveling to Abu Dhabi to participate in a conference on interreligious dialogue sponsored by the Emirates-based Muslim Council of Elders. It's the brainchild of Sheikh Ahmed el-Tayeb, the grand imam of Egypt's Al-Azhar, the revered 1,000-year-old seat of Sunni Islam learning that trains clerics and scholars from around the world.

Francis and el-Tayeb are to address the "Human Fraternity Meeting" Monday that has drawn not only Christian and Muslim representatives but hundreds of Jewish, Hindu, Buddhist and other Christian faith leaders. It's all part of the Emirates' "Year of Tolerance" and its effort to show its openness to other faiths in a region otherwise known for severe restrictions on religions outside of Islam.

"It's something new for the Muslim world, that within the discussion of dialogue, they're talking about interreligious dialogue across the board," beyond basic Christian-Muslim relations, said Marco Impagliazzo, president of the Sant'Egidio Community, a Rome-based Catholic organization active in interfaith relations who will be attending the conference.

Francis' other main initiative in Abu Dhabi is a giant Mass on Tuesday in the city's main sports arena that is expected to draw some 135,000 people in what some have called the largest show of public Christian worship on the Arabian Peninsula. There, Francis will see firsthand a Catholic community that is big, diverse and dynamic, at a time when the wider Mideast has seen an exodus of Christians fleeing persecution at the hands of the Daesh terror group and others.