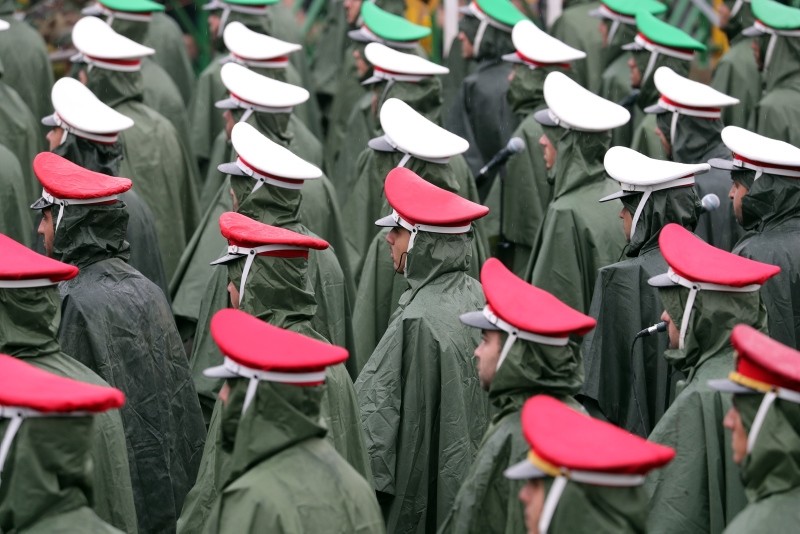 ranian soldiers take part take part in the ceremony marking the 40th anniversary of the 1979 Islamic Revolution, at the Azadi (Freedom) square in Tehran (EPA Photo)
by Feb 11, 2019 12:00 am

Iran's president on Monday insisted "enemy" plots against the country would fail as vast crowds marked 40 years since the Islamic revolution at a time of heightened tensions with the United States.

"The presence of people today on the streets all over Islamic Iran... means that the enemy will never reach its evil objectives," a defiant President Hassan Rouhani told those thronging Tehran's Azadi (Freedom) Square, decrying a "conspiracy" involving Washington.

Chador-clad women, militia members in camouflage fatigues and ordinary citizens marched through the capital in freezing rain to commemorate the day in February 1979 that Ayatollah Ruhollah Khomeini ended millennia of royal rule.

The routes leading up to the square were packed with people as loudspeakers blared revolutionary anthems and slogans.

Life-size replicas of Iranian-made cruise and ballistic missiles stood in a statement of defiance after the U.S. last year reimposed sanctions following its withdrawal from a deal on Tehran's nuclear programme.

Rouhani lambasted calls from the United States and Europe for a fresh agreement to curb Iran's missile program.

"We have not, and will not, request permission from anyone for increasing our defensive power and for building all kinds of... missiles," he told the crowd.

Speaking from a flower-festooned stage overlooking the square, the president warned that Iran was now far stronger than when it faced off against Saddam Hussein's Iraq in a devastating 1980-1988 war.

"Today the whole world should know that the Islamic Republic of Iran is considerably more powerful than the days of the war," Rouhani said.

Seemingly reaching out to his political critics within the country, the president added: "The more we allow different ideas, beliefs and (political) factions the stronger our system will be."

A pre-prepared resolution was read out ahead of his speech that proclaimed "unquestioning obedience to the supreme leader Ayatollah Ali Khamenei" and called U.S. President Donald Trump an "idiot."

In a tweet written on the anniversary that he also sent out in Farsi, Trump said the revolution had been a complete failure.

"The long-suffering Iranian people deserve a much brighter future," the American president added.

Israeli Prime Minister Benjamin Netanyahu warned Iran that this year could be the last time it celebrates the anniversary if it attacks his country.

"If this regime makes the awful mistake of trying to destroy Tel Aviv and Haifa, it will not succeed," he said. "However, this would be the last anniversary of the revolution that they celebrate."

The events Monday were the culmination of official celebrations called the "10 Day Dawn" that marks the period between Feb. 1, 1979, and Feb. 11 when Shiite cleric Khomeini returned from exile and ousted the shah's last government.

The state has played up this year's anniversary as 40 is symbolic of maturity in the Islamic tradition and the age at which Prophet Mohammed received revelations from God.

But despite the official festivities, today's Islamic republic faces acute economic challenges as it struggles with a mix of domestic hardships and U.S. sanctions.

State television offered blanket coverage of the commemorations, showing marches in cities ranging from Abadan in southwestern Iran to Mashhad in the northeast.

Banners held by marchers or hung along the streets bore slogans including "Death to America," "Death to Israel," "we will trample on America," "40 years of challenge, 40 years of U.S. defeats."

A number of Israeli and American flags were set on fire by the crowds.

An anchor on state television warned of hostile foreign media trying to downsize the participation of Iranians in the march but expressed confidence that "they would be confounded by the unprecedented level of attendance."

Those who took to the streets were bullish despite the economic problems in the country, made worse by Washington's punitive measures.

Former public servant Saaghi insisted that it remained paramount for Iranians to stick by the revolution.

"We are here to support the revolution," the 57-year-old pensioner, who refused to give his first name, told AFP at the event in Tehran.

He compared the U.S. sanctions and economic hardships to "riding a bicycle when someone puts a stick in the wheels" but pointed to advances in other fields as more than making up for them.

"On the revolution's 40th anniversary we are at the top for scientific achievements like nanotechnology or accurate missiles," he said.

Cleric Hossein Firouzi told AFP Iran's revolution had achieved everything it set out to in terms of military power, political identity and scientific achievements.

"Iran has changed from a backward nation to a world power," said the 50-year-old.