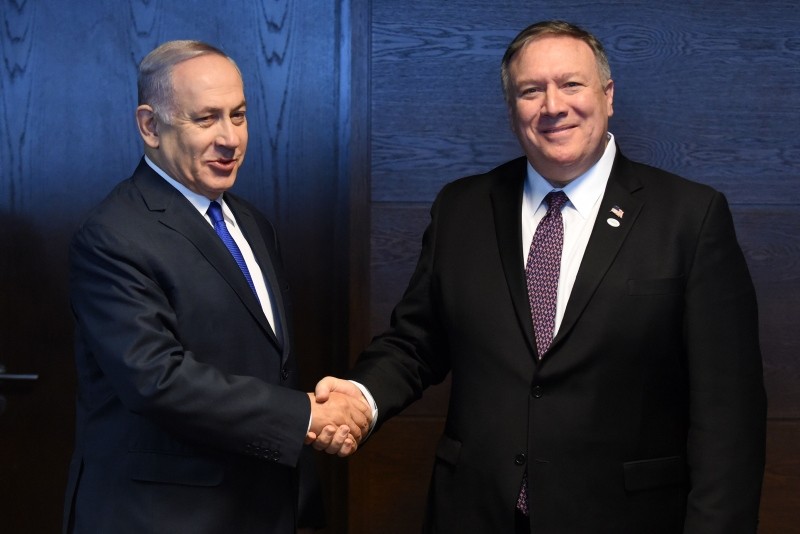 Israeli PM Benjamin Netanyahu (L) shake hands with U.S. Secretary of State Mike Pompeo as they talk to the press on the sidelines of a session at the conference on Peace and Security in the Middle east in Warsaw, on Feb. 14, 2019. (AFP Photo)
by Associated Press Feb 14, 2019 12:00 am

U.S. Secretary of State Mike Pompeo said Thursday at a security conference in Warsaw that Iran is the top threat in the Middle East and confronting the country is key to reaching peace in the entire region.

Pompeo met with Israeli Prime Minister Benjamin Netanyahu before the opening session at the conference and said "pushing back" against Iran was central to dealing with all the region's other problems.

"You can't achieve peace and stability in the Middle East without confronting Iran. It's just not possible," Pompeo said alongside Netanyahu.

The Israeli leader lauded the participation of high-profile Arab dignitaries at the conference, saying it signaled a shift in regional priorities.

"In a room of some 60 foreign ministers, an Israeli prime minister and the foreign ministers of leading Arab countries stood together, and spoke with unusual force, clarity and unity against a common threat of the Iranian regime," he said before his meeting with Pompeo. "I think this marks a change, an important understanding of what threatens our future."

The U.S. and Poland are sponsoring the conference, which they say is aimed at promoting peace and security in the Mideast but appears to be mainly focused on isolating Iran. Iran has denounced the gathering as an American anti-Iran "circus" aimed at "demonizing" it.

U.S. Vice President Mike Pence is attending along with representatives from numerous Arab countries. But France and Germany are not sending Cabinet-ranked officials, and European Union foreign policy chief Federica Mogherini is staying away.

Russia and China aren't participating, either, and the Palestinians, who have called for the meeting to be boycotted, also will be absent.

For Netanyahu, a longtime opponent of the 2015 Iran nuclear deal, the gathering marks a culmination of his call to unite the world against Israel's arch-enemy of Iran. He's long boasted that Israel has clandestinely developed good relations with several Arab states, despite a lack of official ties. On Wednesday, he met with Oman's foreign minister, Yusuf bin Alawi, and at the Thursday's opening session he was seated next to the foreign minister of Yemen, as representatives of Kuwait, Qatar and others looked on.

Israel has signed peace accords with Egypt and Jordan, but other Arab nations have refused to publicly improve relations without significant progress being made toward ending Israel's half-century occupation of lands sought for a Palestinian state. But that shunning has begun to ease in recent years as shared concerns about Iran have overshadowed the Palestinian issue.