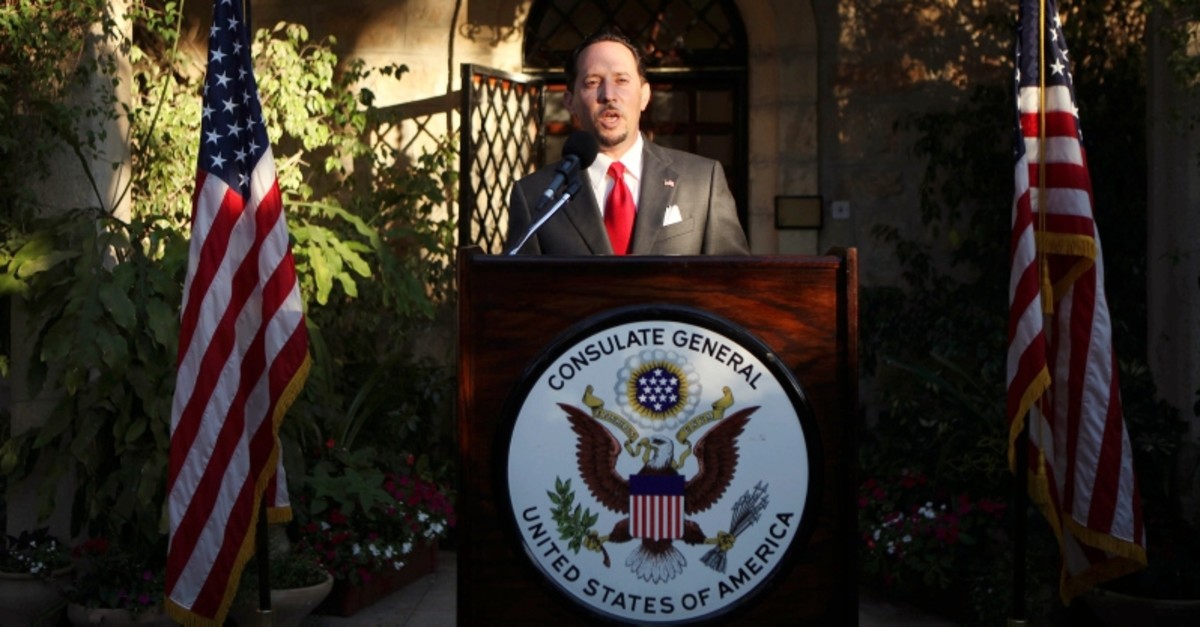 In this June 30, 201, file photo, then U.S. Consul General of Jerusalem Daniel Rubinstein gives a speech during a reception for the upcoming July 4 U.S. Independence Day celebrations at the American Consulate in Jerusalem. (AP Photo)
by Daily Sabah with Agencies Mar 04, 2019 9:43 am

The U.S. decision to create a single diplomatic mission in Jerusalem reflects American recognition of Israeli control over east Jerusalem and the West Bank

The United States has officially shuttered its consulate in Jerusalem, downgrading the status of its main diplomatic mission to the Palestinians by folding it into the U.S. Embassy to Israel, the latest move in a series of steps by President Donald Trump administration against Palestinians.

For decades, the consulate functioned as a de facto embassy to the Palestinians. Now, that outreach will be handled by a Palestinian affairs unit, under the command of the embassy.

The symbolic shift hands authority over U.S. diplomatic channels with the West Bank and Gaza to ambassador David Friedman, a longtime supporter and fundraiser for the West Bank settler movement and fierce critic of the Palestinian leadership. Palestinians view him, along with the Trump administration, as blatantly biased in favor of Israel.

The announcement from the State Department came early Monday in Jerusalem, the merger effective that day.

"This decision was driven by our global efforts to increase the efficiency and effectiveness of our diplomatic engagements and operations," State Department spokesman Robert Palladino said in a statement. "It does not signal a change of U.S. policy on Jerusalem, the West Bank, or the Gaza Strip."

When first announced by U.S. Secretary Mike Pompeo in October, the move infuriated Palestinians, fueling their suspicions that the U.S. was recognizing Israeli control over east Jerusalem and the West Bank, territories that Palestinians seek for a future state.

Palestinian leaders froze contact with the White House after Trump's 2017 decision of recognizing Jerusalem as Israel's capital and castigated the consulate closure. Saeb Erekat, Palestine Liberation Organization (PLO) secretary-general, called the closure "the last nail in the coffin of the U.S. administration's role in peacemaking."

The downgrade is just the latest in a string of divisive decisions by the Trump administration that have backed Israel and alienated the Palestinians, who say they have lost faith in the U.S. administration's role as a neutral arbiter in peace process.

Last year the U.S. recognized Jerusalem as Israel's capital and relocated its embassy there, upending U.S. policy toward one of the most explosive issues of the Israeli-Palestinian conflict. The Palestinians in turn cut off most ties with the administration.

The administration also has slashed hundreds of millions of dollars in humanitarian aid to the Palestinians, including assistance to hospitals and peace-building programs. It has cut funding to the U.N. agency that provides aid to Palestinians classified as refugees. Last fall, it shut down the Palestinian diplomatic mission in Washington.

The Trump administration has cited the reluctance of Palestinian leaders to enter peace negotiations with Israel as the reason for such punitive measures, although the U.S. has yet to present its much-anticipated but still mysterious "Deal of the Century" to resolve the Israeli-Palestinian conflict.

Trump's son-in-law, Jared Kushner, announced last month that the U.S. would unveil the deal after Israeli elections in April. The Palestinian Authority has preemptively rejected the plan, accusing the U.S. of bias toward Israel.

Trump's decision to move the embassy to Jerusalem broke with decades of international consensus that the status of the city must first be decided upon through negotiations by Israel and the Palestinians.

Israel occupied mainly Palestinian east Jerusalem in the 1967 Six-Day War and later annexed it in a move never recognized by the international community. It sees the entire city as its capital, while the Palestinians view the eastern sector, where key holy sites for Christians, Muslims and Jews are located, as the capital of their future state.

The consulate closure also came amid growing warnings over diminishing possibilities for a two-state solution to the Israeli-Palestinian conflict. Israeli settlement construction approvals in the West Bank on land the Palestinians consider part of their future state has accelerated since Trump took office.