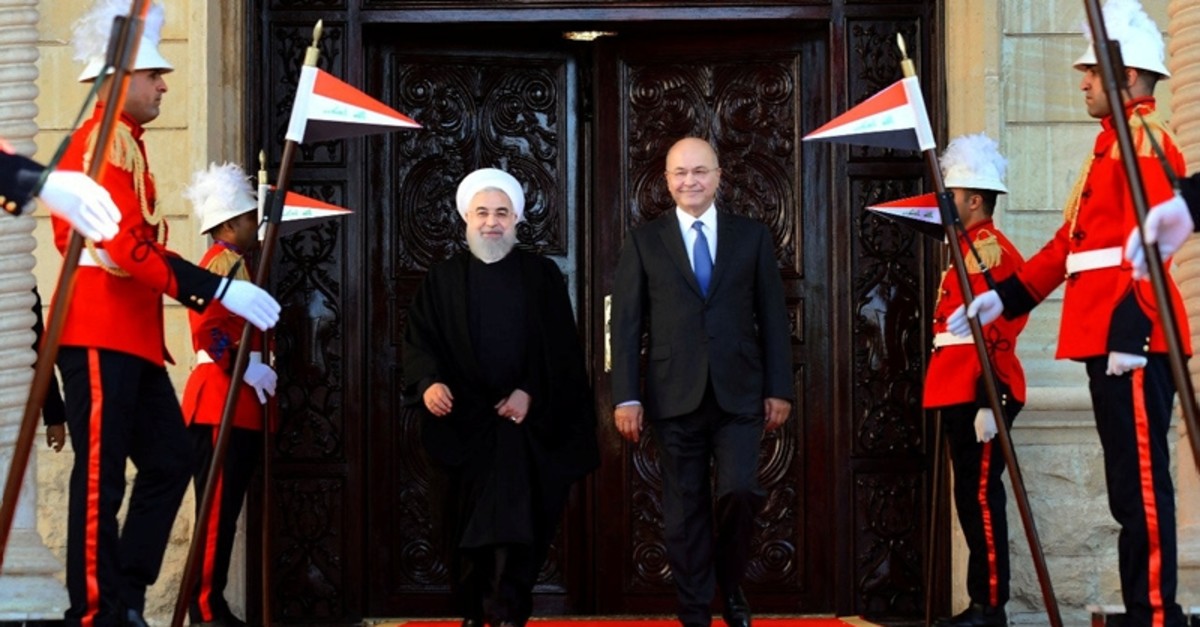 Iranian President Hassan Rouhani made his first official visit to Iraq, primarily focused on trade and investment, at a time when Tehran is battling against an anti-Iran pressure campaign in the region mounted by the U.S.

Iranian President Hassan Rouhani was in Baghdad on Monday, making his first official visit to the nation that Tehran once fought a bloody war against and later backed in the battle with the Daesh terrorist group.

Since Rouhani's election in 2013, Iraq has relied on Iranian paramilitary support to fight Daesh, following the militant group's capture of the Iraqi city of Mosul and other territories in both Iraq and Syria.

The visit is a strong message to the United States and its regional allies that Iran still dominates Baghdad, a key arena for rising tension between Washington and Tehran.

"We are very much interested to expand our ties with Iraq, particularly our transport cooperation," Rouhani said at Tehran's Mehrabad airport. "We have important projects that will be discussed during this visit."

Rouhani, who is accompanied on the three-day visit by a high-ranking political and economic delegation, was received by an honor guard on landing in Baghdad, where he was welcomed by Iraqi Foreign Minister Mohammed Ali Al-Hakim. Rouhani then visited the shrine of Imam Kadhim, the seventh of 12 imams revered by Shiites worldwide. Rouhani, a Shiite cleric himself, paused to reach out and touch the gate surrounding the tomb. He then met President Barham Salih and spoke to journalists, telling them that a "stable Iraq will lead to stability in the entire region." "We want to be united countries, not against others, but attracting others to our unity," Rouhani said. For his part, Salih said Baghdad's central location made it crucial to resolving regional issues. He thanked Iran for its support during Iraq's fight against Daesh.

Relations between the two countries were not always close, they fought a bloody war from 1980 to 1988. Tehran's influence in Baghdad grew after the 2003 U.S.-led invasion of Iraq toppled the government of Saddam Hussein.

Since Rouhani's election in 2013, Iraq has relied on Iranian paramilitary support to fight Daesh terrorists, following the militant group's capture of the Iraqi city of Mosul and other territory in both Iraq and Syria. Now with the militants facing a final territorial defeat in the Syrian village of Baghouz, Iran is looking for Iraq's continued support as it faces a serious pressure campaign by the U.S. President Trump after his decision to withdraw America from Tehran's nuclear deal with world powers.

The visit also came amid Baghdad coming under pressure from Washington to limit political and trade ties with its neighbor. Shiite-majority Iraq is walking a fine line to maintain good relations with its key partners Iran and the U.S. who themselves are arch-foes. It has been under pressure from Washington not to get too close to its neighbor, particularly after its withdrawal from the 2015 nuclear deal. Baghdad was given limited waivers to continue buying electricity and natural gas from Iran, but Washington has urged Iraq to partner with U.S. companies to become energy independent.

Regarding the regional impact of this visit, the talks between Iraq's chief Shiite cleric Grand Ayatollah Ali Sistani and Rouhani would show that it also aimed at bolstering the ranks of Shiite Muslims in the face of Iraq's warming ties with Iran's Sunni-ruled rival Saudi Arabia. The meeting could "prevent Saudi Arabia and its allies from sowing discord" between Iran and Iraq, a Shiite cleric from the Iranian holy city of Qom was recently quoted as saying in Iran's Ebtekar newspaper. Saudi Arabia is keen to develop relations with Baghdad to counter the influence of Iran in Iraq, which is seeking economic support to rebuild after the defeat of Daesh.

During the three-day visit, a series of agreements will be signed in fields such as energy, transport, agriculture, industry and health Iran's state news agency IRNA said.

"Iraq is another channel for Iran to bypass America's unjust sanctions imposed on Iran. This trip will provide opportunities for Iran's economy," a senior Iranian official, who is accompanying Rouhani, told Reuters.

"These two countries are the two pillars and pulse of the region," Zarif said.

"Therefore, this three-day summit will be historic and hopefully a major step forward in bilateral ties," he was quoted by the news agency ILNA as saying on Sunday.

The parlous state of Iran's economy since U.S. President Donald Trump's decision last May to pull out of a 2015 nuclear deal between Iran and six major powers has pushed the country's leaders to try to expand trade ties with neighbors.

The agreement lifted in 2016 sanctions that had been imposed by the United States, European Union and United Nations in return for Iran's curbs on its sensitive nuclear programme.

The Trump administration, which said the accord was too generous and failed to rein in Iran's ballistic missile programme and its involvement in regional conflicts such as Syria and Yemen, reimposed sanctions on Tehran.

Other signatories to the deal have been trying to salvage the pact after the U.S. exit, but U.S. sanctions have largely scared off European companies from doing business with Iran.

The Europeans have promised to help firms do business with Iran as long as it abides by the deal. Iran has itself threatened to pull out of the 2015 deal unless EU powers demonstrably protect its economic benefits.