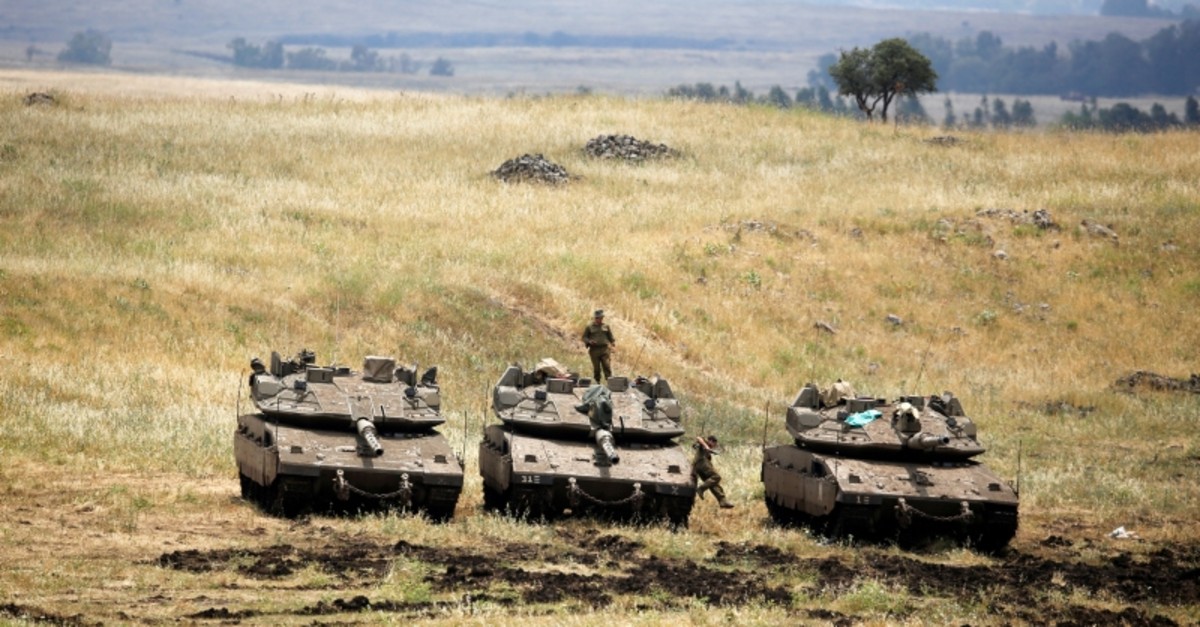 An Israeli soldier stands on a tank as another jumps off it near the Israeli side of the border with Syria in the Israeli-occupied Golan Heights, Israel, May 9, 2018. (REUTERS Photo)
by Daily Sabah with Reuters Mar 13, 2019 12:00 am

The U.S. State Department dropped its reference to Golan Heights as being "occupied" by Israel in its new annual global human rights report released Wednesday, instead referring to the area as "Israeli-controlled" in a move that will likely garner international criticism.

In a separate section, the State Department also refrained from using the words under "occupation" or "occupied" when referring to the West Bank and the Gaza Strip, areas that Israel captured along with the Golan Heights in a 1967 Middle East war.

International law regards the West Bank — including East Jerusalem — as "occupied territory" and considers all Jewish settlement-building activity there to be illegal.

The report comes a day after Republican U.S. Senator Lindsey Graham said he would lobby the Trump administration to recognize the occupied Golan Heights as belonging to Israel.

Graham spoke during a tour of the plateau, captured from Syria during the 1967 Middle East War, with Israeli Prime Minister Benjamin Netanyahu. Israel effectively annexed the Golan in 1981, in a move not recognized internationally, when it adopted legislation that applied its laws to the area.

Graham said he would talk to Trump about recognizing the rugged, strategically located plateau as part of Israel as it was "inconceivable that Israel could ever give it to anyone given the threats Israel faces".

Israel says the territory is a critical buffer zone to defend its territory and has itself lobbied Trump to recognize Israeli sovereignty there.

In 2017, Trump broke with decades of U.S. policy on Jerusalem and recognized the city as Israel's capital, angering Palestinians who seek its eastern sector as capital of a state they want to establish in the West Bank and Gaza Strip.

Israel-Palestine peace talks collapsed in 2014 due to Tel Aviv's refusal to halt West Bank settlement building and accept pre-1967 borders as a basis for a two-state solution to the conflict.