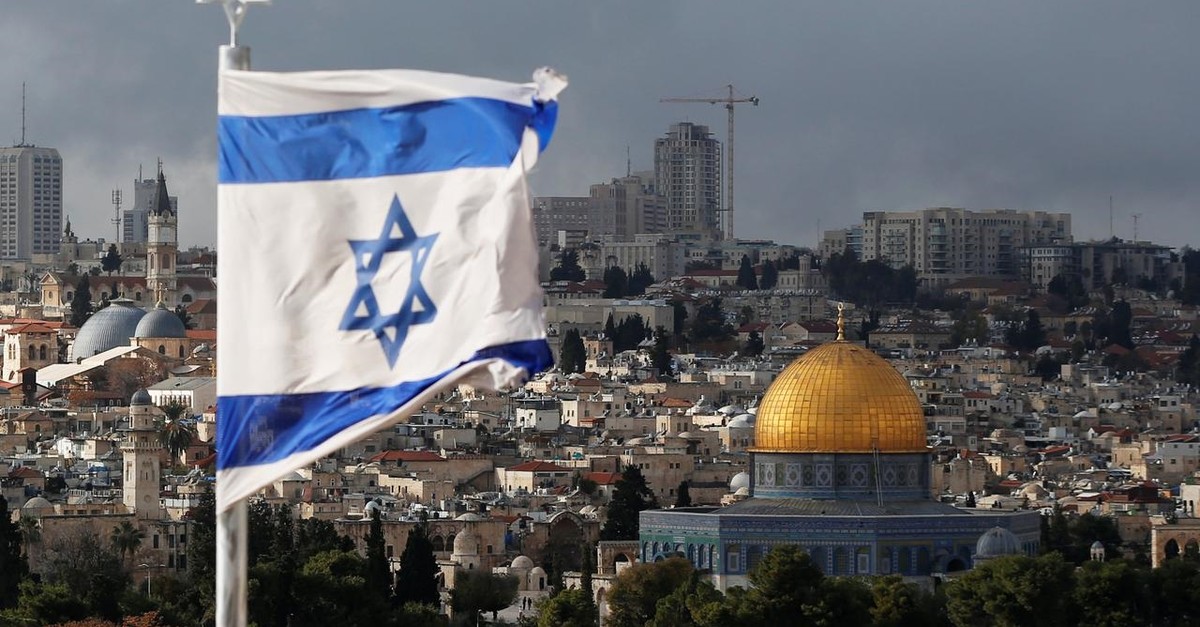 An Israeli flag is seen near the Dome of the Rock, located in Jerusalem's Old City on the compound known to Muslims as Noble Sanctuary and to Jews as Temple Mount December 6, 2017. (REUTERS Photo)
by Compiled from Wire Services Mar 22, 2019 12:27 pm

The United Nations Human Rights Council on Friday condemned Israel's "apparent intentional use of unlawful lethal and other excessive force" against civilian protesters in Gaza and called for perpetrators of all violations in the strip to face justice.

The Geneva forum adopted a resolution on accountability by a vote of 23 states in favor, 8 against with 15 abstentions. The U.S. does not participate, having quit the body last year over perceived anti-Israel bias. The votes against the resolution were given by Australia, Austria, Brazil, Bulgaria, Czech Republic, Fiji, Hungary and Ukraine.

The text was based on a report by a U.N. inquiry which said that Israeli security forces may have committed war crimes and crimes against humanity in killing 189 Palestinians and wounding more than 6,100 at weekly protests last year.

The U.N. Council also adopted a draft resolution on strengthening U.N. presence in the Israeli-occupied Palestinian territory. The Council requested "the United Nations High Commissioner for Human Rights to strengthen the field presence of the Office of the High Commissioner in the Occupied Palestinian Territory, particularly in the occupied Gaza Strip." It also requested the deployment of "personnel and expertise necessary to monitor and document the ongoing violations of international law" in the occupied lands.

Earlier this week, U.N. war crimes investigators called on Israel to stop its snipers using lethal force against protesters on the border with Gaza, as the anniversary of border protests approaches. The U.N. move came after reports suggesting Israeli war crimes against the Palestinians.

The Great March of Return, a key flashpoint for violence, began on March 30, 2018 when hundreds of thousands of Palestinian demonstrators converged on the buffer zone separating Gaza from Israel, calling for the easing of an Israeli blockade of the territory and recognition of the right of Palestinian refugees there to return home to Palestinian territories occupied by Israel.

Israel has responded to the rallies with deadly force. Israel was criticized by a U.N. human rights body for its killing of protesters in Gaza and for its treatment of Palestinians, declaring it a "war crime" under the Statute of Rome for the killings. The high casualty toll triggered a diplomatic backlash against Israel and new charges of excessive use of force against unarmed protesters.

Since 2007, the Gaza Strip has been under a crippling Israeli and Egyptian blockade that has gutted its economy and deprived its roughly 2 million inhabitants of many vital commodities, including food, fuel and medicine. In the long-embargoed enclave, the humanitarian situation has gotten worse each day. Israel's long-lasting blockade of the Gaza Strip has created chronic shortages in Palestinian health facilities. The humanitarian situation in the occupied Palestinian territories is deteriorating further as hospitals struggle to cope with high casualties since the border protests began.