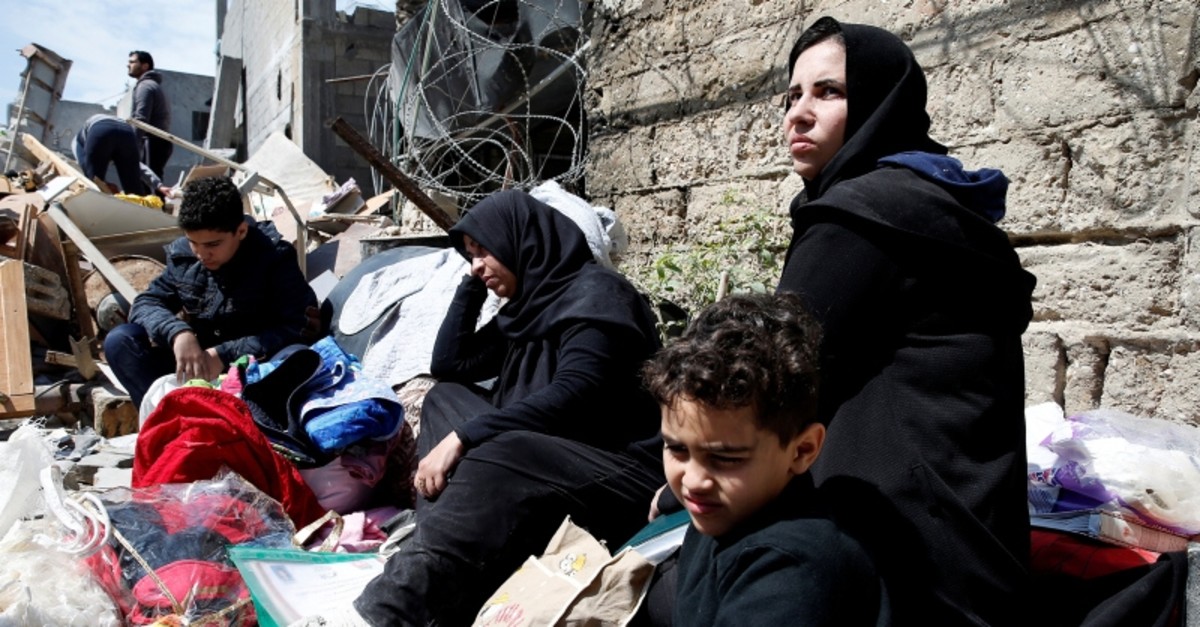 Palestinians sit with their belongings in a street outside their destroyed house after an Israeli missile targeted a nearby Hamas site, in Gaza City March 26, 2019. (Reuters Photo)
by Daily Sabah with AA Mar 26, 2019 12:00 am

The UN's special coordinator for the Middle East peace process expressed concerns Tuesday that violence in Gaza may lead to devastating consequences.

"I am concerned that we may, once again, be facing another very dangerous escalation of violence in Gaza, with potentially catastrophic consequences," Nickolay Mladenov told the UN Security Council. "The last two days show how precariously close we came to the brink of war once again."

Mladenov, who also serves as the UN Secretary-General's personal representative to the Palestine Liberation Organization (PLO) and the Palestinian Authority, said the firing of rockets by Israel violates international law and it must stop.

The Israeli military launched a wave of airstrikes Monday across the Gaza Strip following rocket fire from the enclave that injured seven Israelis north of Tel Aviv.

The army reportedly deployed missile-defense batteries in several locations across the country while sending two additional infantry brigades to the Gaza-Israel buffer zone.

While there was no comment from Egypt, several Israeli officials denied any cease-fire deal with Gaza-based factions.

Mladenov urged all Palestinian factions to work with Egypt in order to implement the 2017 Cairo agreement, which, if enacted, would give the Palestinian Authority control over the Gaza Strip in exchange for an end to the sanctions placed on the Strip, which includes cuts to electricity.

Hamas has ruled the Gaza Strip since 2007, after ceasing the territory from Fatah.

Mladenov further shared his concerns over the lack of progress on the two-state solution between Israel and Palestine, which is in line with UN resolutions.

"There is no viable alternative to the two state solution," he said. "Creating conditions for the parties to return to meaningful negotiations remains critical."