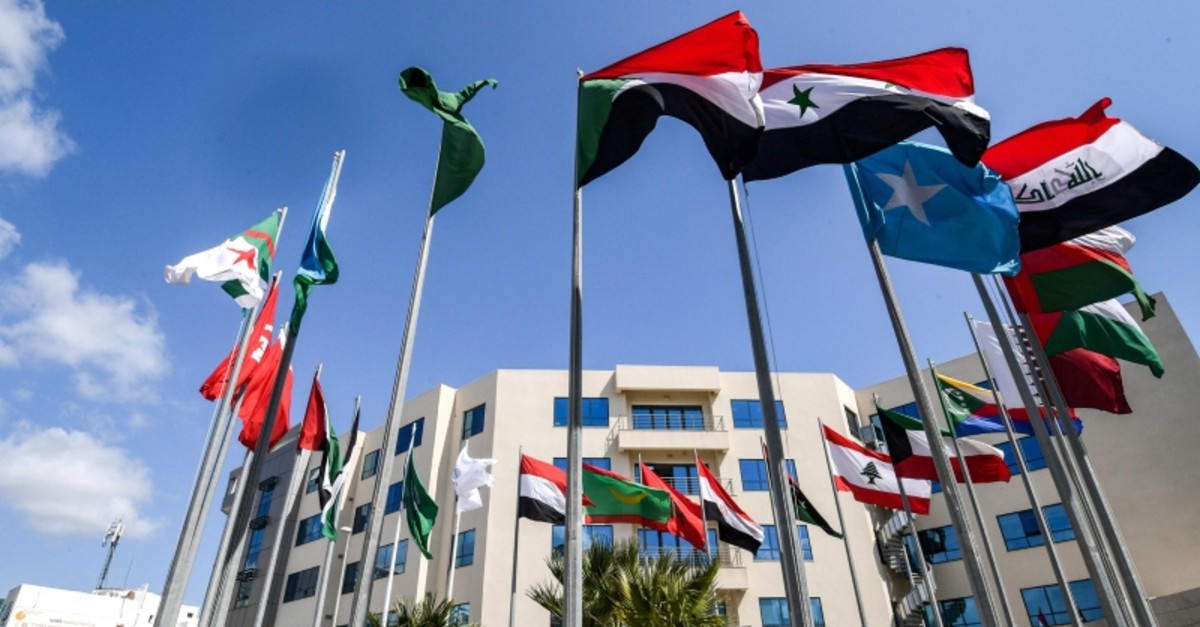 This picture taken on March 28, 2019 shows the flags of the Arab League member states flying outside the Council of Arab Interior Ministers' headquarters in the Tunisian capital Tunis, ahead of the summit due to take place on March 31. (AFP Photo)
by Associated Press
Mar 29, 2019 12:00 am

Arab leaders meeting in Tunisia on Sunday hope to project unified opposition to the Trump administration's acceptance of Israeli control over the Golan Heights and Jerusalem, but as with past Arab League summits, the gathering is likely to expose their own bitter rivalries.

Gulf states, especially Saudi Arabia and the United Arab Emirates, are likely to tone down any statement of condemnation, eager to maintain good relations with the White House as it cranks up pressure on their main rival, Iran.

Affirming the international consensus that the Golan is occupied Syrian land would only further highlight Syria's absence from the Arab League, from which it was expelled in the early days of the uprising against Bashar Assad. Some Arab leaders think Syria — a founding member — should be readmitted. Others, like Saudi Arabia and Qatar, have spent years supporting the opposition.

Arab League summits are nearly always marred by no-shows. This year, Algeria's ailing President Abdelaziz Bouteflika and Sudan's Omar al-Bashir will skip the meeting as they contend with weekly mass protests against their long reigns.

Those expected to attend, meanwhile, are still split over the wars in Yemen and Syria, and the nearly two-year boycott of Qatar by fellow Arab League members.

Israel seized the Golan Heights in the 1967 Mideast war after Syria had for years used the strategic plateau to shell northern Israel. Arab states have long demanded its return, and condemned U.S. President Donald Trump's decision to recognize Israeli sovereignty over it earlier this week.

Arab League spokesman Mahmoud Afifi said the 22-member bloc would aim to issue a proclamation on the Golan, but experts expect little more than a standard denunciation.

"It will be just a very strong, theatrical, nice, maybe strong statement," said Ahmed Abd Rabou, a visiting professor of international affairs at the University of Denver. "But I doubt that this will have a true political effect."

Arab leaders responded similarly to the even more inflammatory U.S. decision last year to recognize Jerusalem as Israel's capital — with statements condemning the move but little else.

Many Gulf states view the U.S. as a vital ally against Iran, welcoming Trump's decision to withdraw from the 2015 nuclear agreement and restore crippling sanctions. Other Arab states are preoccupied with their own troubles, with Yemen and Libya riven by internal conflicts and Iraq looking for international support as it struggles to rebuild after the war against the Islamic State group.

Many Arab states have softened their opposition to Assad as he has largely defeated the uprising with the help of Russia and Iran. They are concerned about inroads made by non-Arab Turkey and Iran, and may also be eyeing lucrative reconstruction projects in areas devastated by war.

The United Arab Emirates reopened its embassy in Damascus in December, and other Arab nations are expected to follow. Khemaies Jhinaoui, the foreign minister of summit-host Tunisia, said earlier this year that Syria's "natural place" is within the Arab League.

But Mahmoud Khemiri, a spokesman for the summit, said Assad's reintegration "isn't foreseeable at the current time."

Trump's Golan proclamation puts Arab leaders in the awkward position of standing up for a nation they have shunned, which could accelerate reconciliation efforts.

"It certainly gives Assad an opening to get himself readmitted. mainly because now he can play the aggrieved party in an issue about which the Arab world is totally united," said Fred Hof, a senior fellow at the Atlantic Council's Rafik Hariri Center for the Middle East.

Eight years after Arab Spring protests swept the region, threatening the future of the political order long upheld by the Arab League, protesters are again taking to the streets in Algeria and Sudan, calling for the resignation of two of the longest-serving Arab leaders.

Bouteflika, in office since 1999, canceled the April 18 presidential election and withdrew his bid for a fifth term, but announced a transition process that opponents fear could keep him in power indefinitely. The 82-year-old has rarely been seen in public and has not addressed the nation in person since a 2013 stroke.

Earlier this week, Algeria's top general called for initiating a constitutional process to declare Bouteflika unfit to serve, in a bid to address the mass protests held since Feb. 22. But opposition parties denounced the idea, fearing it would leave the secretive elite in power.

In Sudan, protests sparked by an economic crisis in December quickly morphed into calls for the resignation of al-Bashir, who seized power in an Islamist-backed military coup in 1989. He has shown no sign of stepping down, and authorities have launched a crackdown that has killed dozens of people.

The Arab League, dominated by monarchs and autocrats, is unlikely to side with the protesters in either country.

Since its founding more than 70 years ago, the Arab League has struggled — largely unsuccessfully — for unity, with the perennial focus on the Palestinian cause eliding the many issues on which Arab leaders are deeply divided.

Libya, which slid into chaos after an Arab Spring uprising in 2011, is split between rival authorities in the east and west, each backed by an array of armed groups, some supported by other Arab states. In Yemen, the Saudi-led coalition battling the Iran-aligned Houthi rebels has struggled with internal discord, with militias allied with the United Arab Emirates clashing with forces loyal to the internationally recognized government.

Saudi Arabia, the United Arab Emirates, Egypt and Bahrain have been boycotting Qatar since June 2017 over its alleged support for terrorist groups and its close ties to both Iran and Turkey. Qatar's emir and the leaders of the boycotting nations are expected to attend the summit and might even sit at the same sprawling table. Whether they will be able to set their dispute aside, even for one day, remains to be seen.