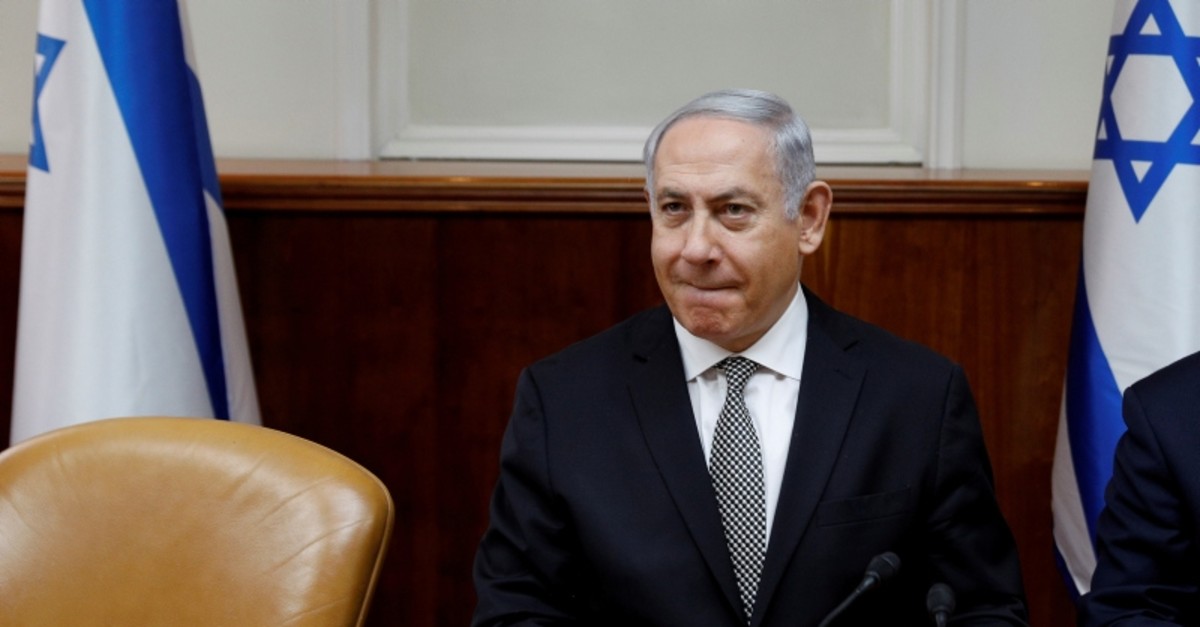 Prime Minister Benjamin Netanyahu, who has been dubbed "CRIME MINISTER" by rivals, has fallen behind his main challenger in opinion polls ahead of next week's Israeli election but still has an easier path to form a government that would keep him in power for a record fifth term.

Netanyahu, who has dominated Israeli politics for a generation, is fighting for his political survival against former top general Benny Gantz, a political novice.

The outcome is unlikely to be decided on election day, when voters cast ballots for party lists. No party has ever won an outright majority in the 120-seat parliament, meaning days or even weeks of coalition negotiations will lie ahead.

And looming criminal indictments against Netanyahu, who has denied any wrongdoing in three cases of alleged bribery and fraud, could cloud his political future and that of any government he might head, possibly leading to a new election.

On Friday, the last day polling is allowed, Gantz's centrist Blue and White party was projected to take 30 seats, more than the 26 forecast for Netanyahu's right-wing Likud, according to a poll in Yedioth Ahronoth newspaper.

But the poll also projected a combined total of 63 seats for the parties in Netanyahu's right-wing bloc, a slim but workable majority. Other polls showed similar results. The coalition arithmetic for Gantz appears far more difficult.

Israel's president, Reuven Rivlin, will consult with the leaders of every party represented in parliament and choose whoever he believes has the best chance of forming a coalition. The nominee has up to 42 days to form a government before the president asks another politician to try.

In the final stretch of the campaign, Netanyahu cautioned his right-wing supporters against over-confidence: "It's a close race between right and left," he told Israel Radio on Thursday.

Gantz appeared invigorated by the polling numbers on Friday, telling his backers they were "a few metres away from victory".

"On Tuesday, everything you see here in this country will shift," Gantz told a rally in Kiryat Ekron.

Netanyahu has fought the campaign under the shadow of the public announcement in February by Israel's attorney general that he intends to indict him.

No charges have yet been brought and there will be a pre-trial hearing at which Netanyahu can challenge any findings. If indicted, he is under no obligation to quit, but he would need coalition partners to stand by him to avert a new election.

"Netanyahu's supreme and indeed only imperative will be to cobble together an indictment coalition: one that will make it possible for him to continue to serve even after the hearing and after he's indicted," political analyst Yossi Verter wrote in the liberal Israeli daily Ha'aretz on Friday.

That could include efforts, promoted by some Netanyahu loyalists, to pass a law to ban the indictment of a sitting prime minister. Some potential coalition allies have publicly balked at such legislation, including at least one cabinet minister - and potential successor - in Netanyahu's own party.

With Israeli-Palestinian peace talks frozen since 2014, personalities and personal attacks have dominated an election campaign that has largely skated over war-and-peace issues that once dominated Israeli political debate.

Netanyahu has cast Gantz, a former military chief, as a weak leftist who would endanger Israel's security by giving territorial concessions to the Palestinians.

Gantz professes a commitment to peace while giving no clear indication whether he would support the Palestinian goal of statehood in territories captured by Israel in a 1967 war.

Netanyahu has also highlighted his close relationship with U.S. President Donald Trump, who overturned decades of U.S. policy and international consensus to move the U.S. embassy to Jerusalem and recognise it as Israel's capital.

Netanyahu visited Trump last month. At the meeting, Trump, in what was widely seen as a bid to boost Netanyahu, again broke with long-term policy to recognise Israeli sovereignty over the Golan Heights, also captured in 1967.

In Jerusalem, Hezi Levy, 60, a taxi driver, said he backed Netanyahu: "The most important thing in the world is that the left will not assume power, God forbid," he said.

But other voters deplored recent scandals. "The focus is on the corruption that's happening politically," said Ayelet Noff, 43, a public relations manager from Tel Aviv, a Gantz supporter who said she wanted more attention paid to the economy.