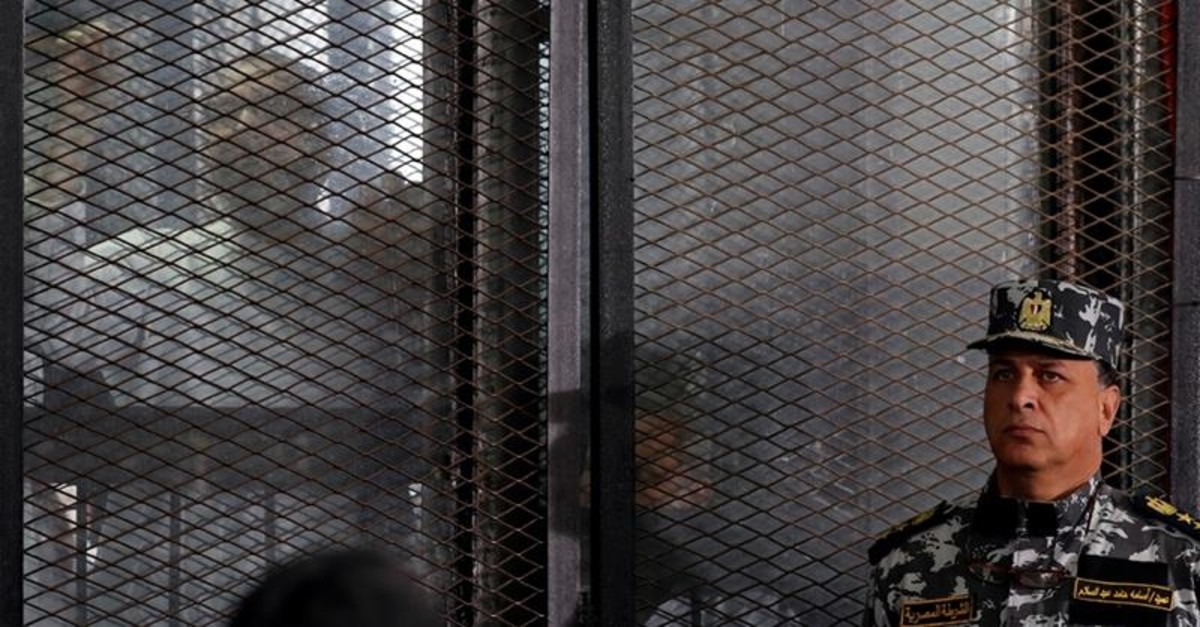 Muslim Brotherhood defendants gesture behind the bars during a court session, Cairo.
by Yusuf Selman İnanç May 04, 2019 12:11 am

An article published in Sada, a Carnegie International-related platform, has revealed that Egypt not only executes dissidents but also conducts extrajudicial killings and promotes medical negligence

Egypt has always been a leading country in the Arab world, whether in the context of politics, cinema or economy. Egypt's initiative during the establishment of Israel led to the Arab-Israeli wars, though these wars came to an end when Egypt signed a peace deal. Similarly, the revolution in Tahrir Square in 2011 ignited hope across the Middle East and North Africa, but the fire of hope did not burn for long. While the Gulf and the U.S. eagerly back the current regime and accuse certain groups like the Muslim Brotherhood of diminishing stability, rights groups warn that human rights violations have become more widespread than ever in the country.

In 2013, then-Defense Minister Abdel-Fattah el-Sissi led a bloody military coup, ousting Egypt's first democratically elected president, Mohammad Morsi. Since then, a harsh crackdown on dissidents, not only the Muslim Brotherhood but anyone who opposed el-Sissi, has commenced. The latest constitutional referendum last month paved the way for el-Sissi to remain in power until 2030. Despite the country's struggle for economic amelioration, the human rights violations have become alarming.

In the end of February, Egyptian authorities executed nine people based on accusations that they were responsible for assassinating Egyptian General Prosecutor Hisham Barakat. Several rights groups, including Amnesty International and the United Nations, said the trials were not fair and that the defendants were forced to make confessions under torture. The Egyptian regime has faced similar criticism since the coup happened, at the end of which the new regime sentenced hundreds of people to death.

Because the Egyptian regime knew that there would be harsh criticism of the executions, it has largely avoided putting those verdicts into effect. Instead, the number of extrajudicial killings and disappearances have dramatically increased in the country. In an article by Maged Mandour published by Sada, an online platform under Carnegie International, the Nadeem Center for Rehabilitation of Victims of Violence and Torture reported, "In 2015, there were 464 cases of enforced disappearances, skyrocketing to 980 cases in 2016." Underlining the increase in the extrajudicial killings, the author said, "As the number of official executions went down, from 44 in 2016 to 32 in 2018, the number of extrajudicial killings rose dramatically." Egyptian police generally claim that those people died in shootouts, but the author quotes eyewitnesses who claim that: "These stories of shootings are fabricated, and photographs released by the Ministry of Interior are inconsistent with police accounts. Rather than the shootouts the security forces claim occurred, these photographs suggest the victims died from close-range execution and were moved after death."

Human rights groups also mention the conditions in the detention centers where the medical and nutritional supplies are insufficient. Likewise, the author believes that Egyptian security forces deliberately deprive the detainees of food so they will die of starvation. "In 2015, for example, the Nadeem Center documented 81 cases of death in detention centers due to medical negligence – separate from the 137 they listed as having been directly killed inside detention centers. This number remained consistent in 2016, at 80 cases. Before that, there were 170 documented cases of death due to medical negligence starting from July 2013 until May 2015. The trend has continued, with seven detainees dying from medical negligence in January 2019 alone," the article read.