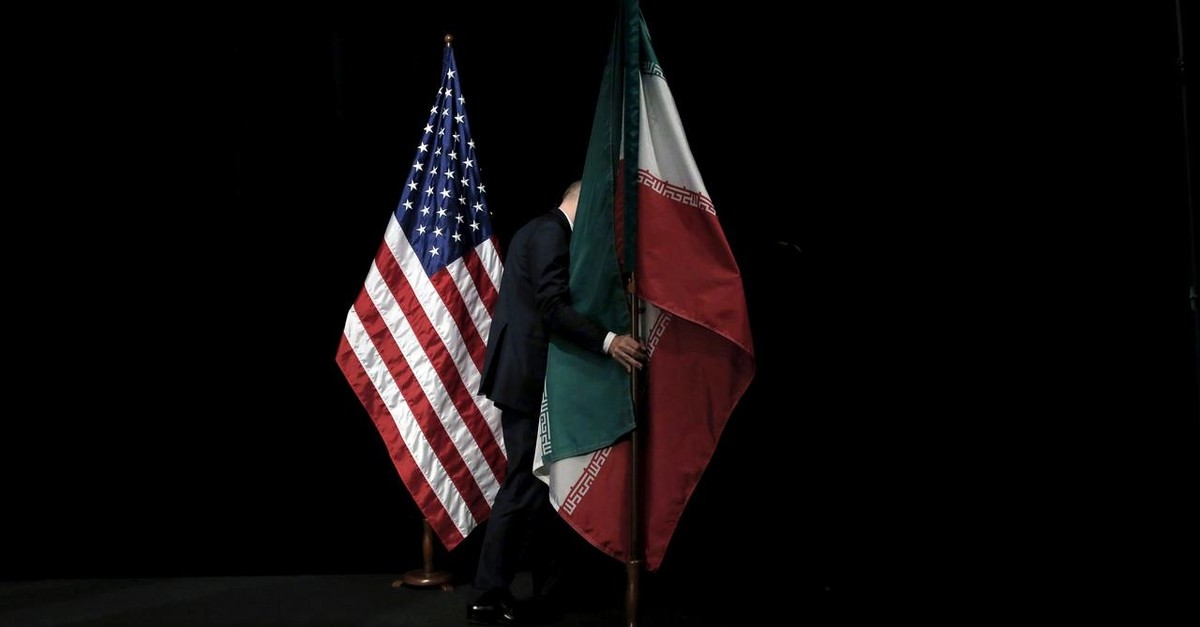 A staff member removes the Iranian flag from the stage after a group picture with foreign ministers and representatives during Iran nuclear talks at the Vienna International Center in Vienna, Austria, July 14, 2015. (Reuters Photo)
by Compiled from Wire Services May 08, 2019 5:30 pm

The United States is planning to impose further sanctions on Iran 'very soon', a senior White House official said on Wednesday, as Tehran announced it was scaling back some curbs to its nuclear program.

Tim Morrison, Special Assistant to the President and Senior Director for Weapons of Mass Destruction and Biodefense, told a conference that Washington was not 'done' with imposing sanctions on Iran.

"If you are a bank, an investor, an insurer or other business in Europe you should know that getting involved in the … Special Purpose Vehicle is a very poor business decision," Morrison said.

He has also called Iran's move to scale back some curbs to its program "nothing less than nuclear blackmail of Europe".

Iran threatened Wednesday to resume higher enrichment of uranium in 60 days if world powers fail to negotiate new terms for its 2015 nuclear deal a year after President Donald Trump withdrew from the accord, raising tensions as a U.S. aircraft carrier and a bomber wing were deployed to confront unspecified threats from Tehran.

In a televised address, President Hassan Rouhani also said that Iran would stop exporting excess uranium and heavy water from its nuclear program, two requirements of the deal. He did not elaborate on the degree to which Iran was prepared to enrich uranium, which at high levels of enrichment can be used in nuclear weapons.

Rouhani said Iran wanted to negotiate new terms with remaining partners in the deal, but acknowledged that the situation was dire.

"We felt that the nuclear deal needs a surgery and the painkiller pills of the last year have been ineffective," Rouhani said. "This surgery is for saving the deal, not destroying it."

Iran notified Britain, Russia, China, the European Union, France and Germany of its decision earlier Wednesday. All were signatories to the nuclear deal and continue to support it. Iranian Foreign Minister Mohammad Javad Zarif was to meet Wednesday in Moscow with his Russian counterpart.

"If the five countries join negotiations and help Iran to reach its benefits in the field of oil and banking, Iran will return to its commitments according to the nuclear deal," Rouhani said.

However, Rouhani warned of a "strong reaction" if European leaders instead sought to impose more sanctions on Iran via the U.N. Security Council. He did not elaborate.

Rouhani also said Wednesday that if the 60 days pass without action, Iran will halt a Chinese-led effort to redesign its Arak heavy water nuclear reactor. Such reactors produce plutonium that can be used in nuclear weapons.

Zarif separately issued his own warning from Moscow.

"After a year of patience, Iran stops measures that (the) US has made impossible to continue," he tweeted. World powers have "a narrowing window to reverse this."

"I heard that Iran intends to continue its nuclear program. We will not allow Iran to obtain nuclear weapons," Netanyahu said. "We will continue to fight those who seek to take our lives, and we will thrust our roots even deeper into the soil of our homeland."

There was no immediate response from the U.S. However, the White House said Sunday it would dispatch the aircraft carrier USS Abraham Lincoln and B-52 bombers to the Persian Gulf over what it described as a new threat from Iran.

Apparently responding to that, the general staff of Iran's armed forces issued a statement Wednesday applauding Rouhani's decision and warning its enemies.

"Any possible movement by them will face a regrettable response by the Iranian nation and its armed forces," the statement said, according to the semi-official Fars news agency.

The 2015 deal lifted sanctions on Iran in exchange for limits on its nuclear program. Iran reached the deal after years of negotiations, including secret talks between Iran and President Barack Obama's administration in Oman. Western governments had long feared Iran's atomic program could allow it to build nuclear weapons. Iran has always maintained its program is for peaceful purposes.

The U.S. withdrew from the deal after Trump campaigned on a pledge to tear up the document. His administration contends the deal should have included limits to Iran's ballistic missile program and what it describes as Tehran's malign regional influence.

However, the U.N.'s atomic watchdog, the International Atomic Energy Agency, repeatedly has verified Iran stuck to terms of the deal. The agency did not immediately respond to a request for comment.

After the U.S. withdrew from the accord it restored crippling sanctions on Iran, exacerbating a severe economic crisis. The Iranian rial, which traded at 32,000 to $1 at the time of the accord, traded Wednesday at 153,500.

That Iran chose to keep its excess uranium and heavy water first, rather than abandon the accord in its entirety, indicates it still hopes to secure a deal. In years of negotiations over its nuclear program, Iran had similarly gone step-by-step in ramping up its activities while holding talks. The latest move also protects Rouhani, a relative moderate within Iran's Shiite theocracy, from criticism from hard-liners who have long maintained that Iran gave up too much in the nuclear deal.

The U.S. last week ended deals allowing Iran to exchange its enriched uranium for unrefined yellowcake uranium with Russia, and to sell its heavy water, which is used as a coolant in nuclear reactors, to Oman. The U.S. also has ended waivers for nations buying Iranian crude oil, a key source of revenue for Iran's government.

Currently, the accord limits Iran to enriching uranium to 3.67%, which can fuel a commercial nuclear power plant. Weapons-grade uranium needs to be enriched to around 90%. However, once a country enriches uranium to around 20%, scientists say the time needed to reach 90% is halved. Iran has previously enriched to 20%.

"Whenever our demands are met, we will resume the same amount of suspended commitments, but otherwise, the Islamic Republic of Iran will suspend the implementation of other obligations step by step," a statement from Iran's Supreme National Security Council said Wednesday.

It added: "The window that is now open to diplomacy will not remain open for a long time."