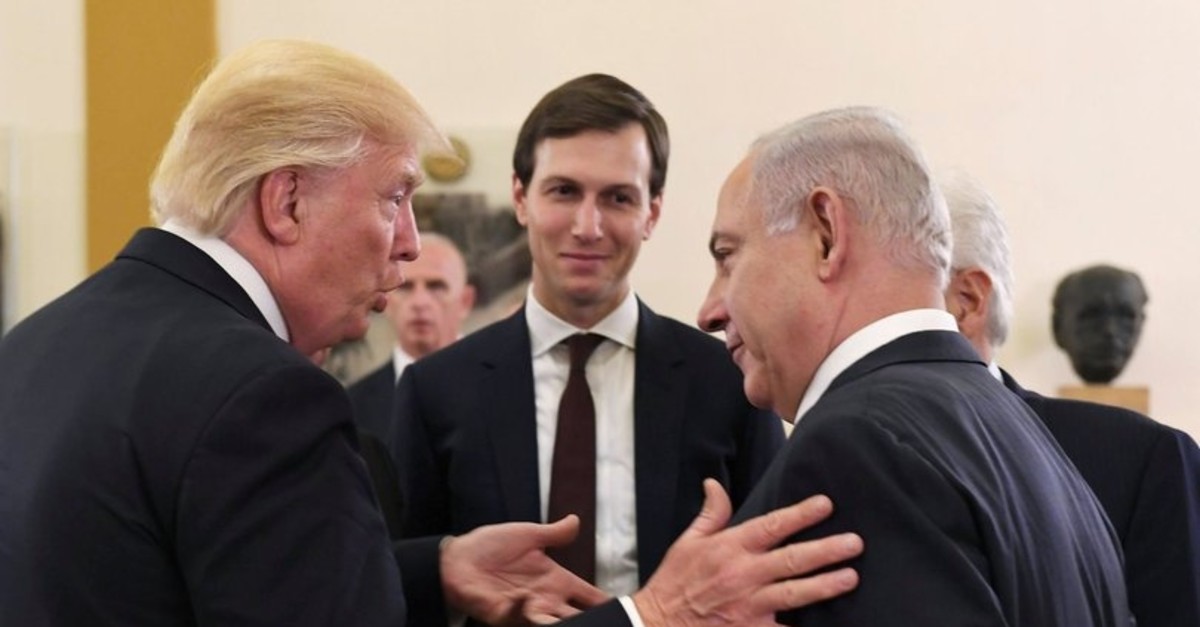 An Israeli newspaper published an outline of a U.S. peace deal, showing that a 'New Palestine' will be established that would be politically reshaped as demanded

U.S. President Donald Trump's adviser and son-in-law Jared Kushner is known for his ambitious plan, which, according to the U.S. administration will bring peace to the region through overcoming the Israeli-Palestinian conflict. An Israeli newspaper revealed the details of the plan. The claims in the daily Israel Hayom have not been confirmed by Israeli, American or Palestinian officials. However, it is likely that Kushner and his team have already drafted their offer. The newspaper outlined the main points of the agreement. According to the translation of the article, which was published in Hebrew, provided by Anadolu Agency (AA), a tripartite agreement will be signed between Israel, the Palestine Liberation Organization (PLO) and Hamas. A Palestinian state called "New Palestine" will be established in Judea, Samaria (in the West Bank) and Gaza, with the exception of Israeli settlements in the West Bank.

Another report, published on Mondoweiss with reference to the same article, said, "The Palestinian state will control two international borders with Jordan, likely turning over the Israeli controlled Allenby crossing between the West Bank and Jordan. New Palestine will have a local police force who will be allowed to hold "light weapons." The new Palestinian state will be prevented from forming a military. Israel will be responsible for security for a fee paid by the Palestinian government." AA also underlined that the report was claiming that "The settlement blocs in the West Bank will remain under Israeli control and will stretch to reach other isolated settlements."

One of the most controversial issues is the situation and the status of Jerusalem. The U.S. decision to move its embassy from Tel Aviv to Jerusalem last year connoted that Washington recognized Jerusalem as the Israeli capital, despite the fact that Israel has been keeping Jerusalem under its occupation according to international agreements. In the alleged deal Jerusalem "will not be divided or shared between Israel and New Palestine and will be the capital of both Israel and New Palestine. The Arab population in Jerusalem will be citizens of New Palestine. The Israeli Jerusalem municipality will be responsible for all areas of the city except for education, which will be dealt with by the Palestinian government. The new Palestinian Authority will pay taxes and water costs to the Jerusalem municipality. Jews will not be allowed to buy Arab homes, Arabs will not be allowed to buy Jewish homes, no additional areas will be annexed to Jerusalem and the present status of the holy sites will continue."

On Gaza, the report said "Egypt will lease new land to Palestine to construct an airport and factories and serve the commercial and agriculture sectors without allowing Palestinians to reside on this land. The borders of these lands and leasing price will be determined between the two parties through the mediation of the supporting countries."

It is likely that the Gulf countries, mainly Saudi Arabia, will support the plan as Kushner aims to better the relations between Israel and the Gulf. The Gulf, Israel and the U.S. believe that Iran and the Muslim Brotherhood ideology are threats to themselves. Therefore, a new plan in which New Palestine will be created may become a chance for the three countries to re-shape Palestine's political body.