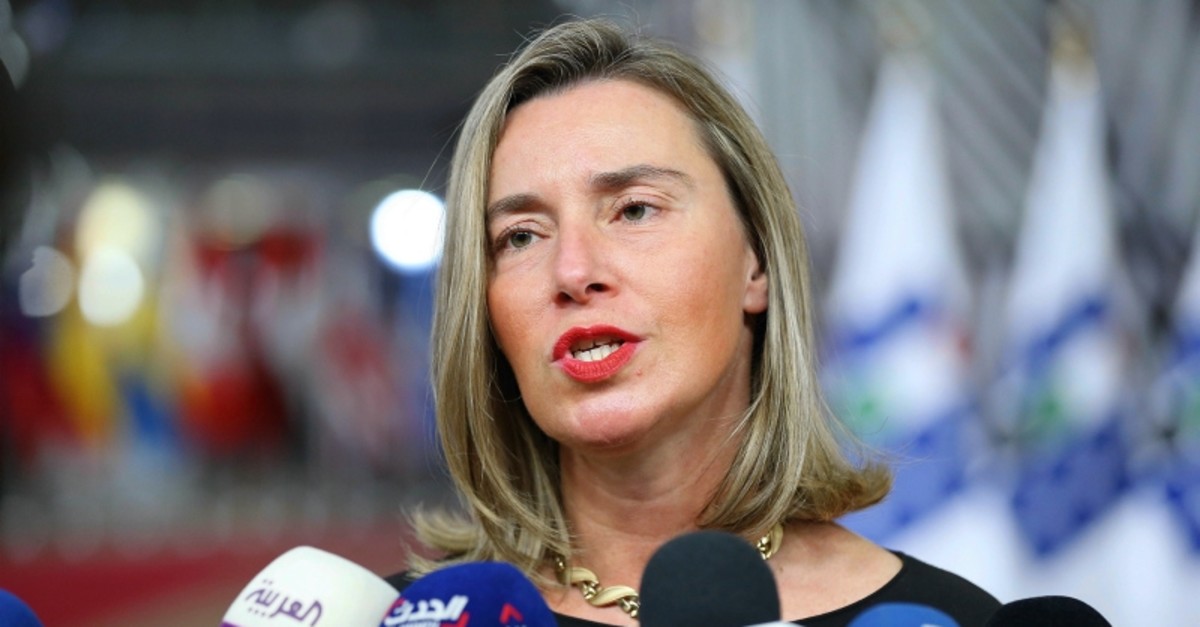 This file photo shows EU foreign policy chief Federica Mogherini speaking before a conference on Syria in Brussels, on Feb. 15, 2019. (AA Photo)
by Compiled from Wire Services May 09, 2019 11:52 am

Britain, France and Germany and the European Union reaffirmed their commitment on Thursday to the Iran nuclear deal while warning that they "reject any ultimatums," after Tehran announced that it would cease to fully abide by the accord.

The move is set to worsen a confrontation with the United States, which withdrew from the nuclear deal a year ago. The other parties to the deal, besides the Europeans, are China and Russia.

Rouhani said that Iran would immediately stop abiding by limits on its enriched uranium stock and materials related to its heavy water reactor in Arak.

Tehran vowed further steps unless the Europeans manage in the next 60 days to ease the impact of sanctions imposed in the oil and banking sector in particular.

"We reject any ultimatums and we will assess Iran's compliance on the basis of Iran's performance regarding its nuclear-related commitments under the JCPOA and the NPT (Treaty on the Non-Proliferation of Nuclear Weapons)," EU foreign policy chief Federica Mogherini and the foreign ministers of Britain, France and Germany said in a joint statement, with JCPOA referring to the Iran nuclear deal, adding that they "strongly urge Iran to continue to implement its commitments" under the nuclear deal.

They expressed "great concern" at Iran's announcement, while recalling their own "firm commitments" under the accord, "including as regards sanctions-lifting for the benefit of the Iranian people."

"We are determined to continue pursuing efforts to enable the continuation of legitimate trade with Iran," they said, referring in particular to INSTEX, an instrument being set up to enable businesses to engage in barter-style transactions with Iran.

They said they regretted the re-imposition of sanctions by the United States after it withdrew from the nuclear deal and added that they remained committed to preserving and fully implementing the Iran nuclear deal.