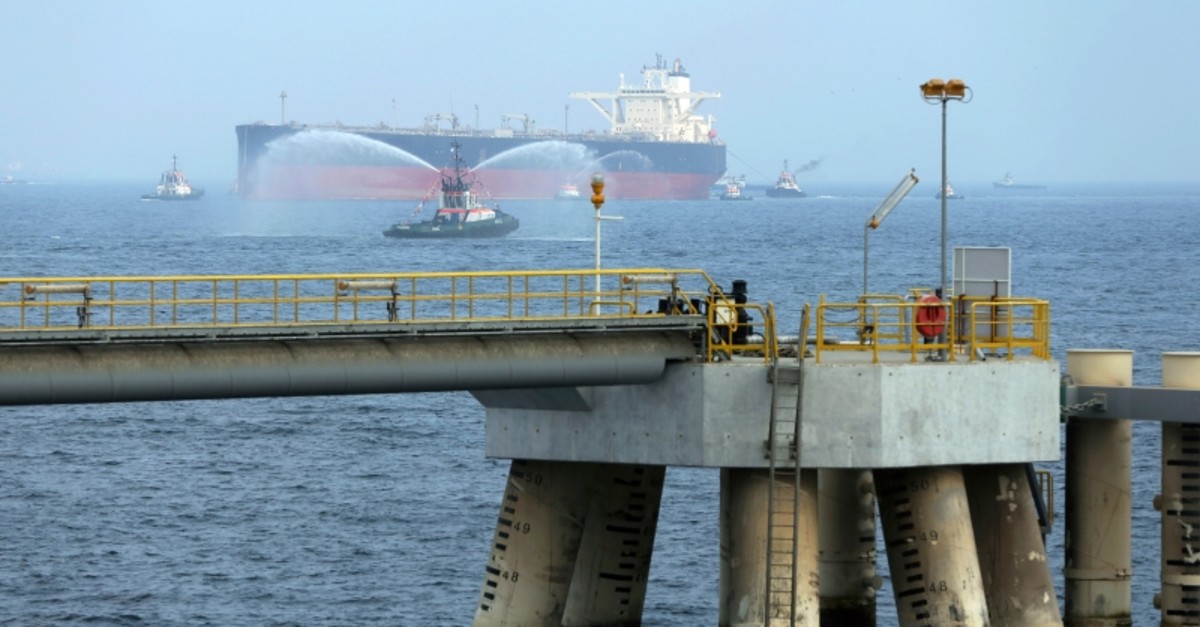 Saudi Arabia said Monday two of its oil tankers were damaged in "sabotage attacks" in the Gulf as tensions soared in a region already shaken by a standoff between the United States and Iran.

It came as U.S. Secretary of State Mike Pompeo scrapped a planned visit to Moscow to head to Brussels instead for talks with European officials on Iran.

Tehran called for an investigation into the "alarming" attacks and warned of "adventurism" by foreign players to disrupt maritime security.

The U.S. has already strengthened its military presence in the region, including deploying a number of strategic B-52 bombers in response to alleged Iranian threats.

Saudi Arabia, Iran's regional arch-rival, condemned "the acts of sabotage which targeted commercial and civilian vessels near the territorial waters of the United Arab Emirates," a foreign ministry source said.

"This criminal act constitutes a serious threat to the security and safety of maritime navigation and adversely impacts regional and international peace and security," the source added.

The UAE said on Sunday that four commercial vessels of various nationalities had been targeted by acts of sabotage off the emirate of Fujairah.

Saudi Energy Minister Khalid al-Falih said the two tankers suffered "significant damage" to their structures but there were no casualties or any oil spill.

"Two Saudi oil tankers were subjected to a sabotage attack in the exclusive economic zone of the United Arab Emirates, off the coast of the Emirate of Fujairah, while on their way to cross into the Arabian Gulf," the SPA state news agency quoted al-Falih as saying.

In his statement, al-Falih said the attacks on the two tankers happened at 6 a.m. Sunday.

"One of the two vessels was on its way to be loaded with Saudi crude oil from the port of Ras Tanura, to be delivered to Saudi Aramco's customers in the United States," al-Falih said.

Saudi Arabia did not identify the vessels involved, nor did it say whom it suspected of carrying out the alleged sabotage.

The statement came just hours after Iranian and Lebanese media outlets aired false reports of explosions at the city's port.

Earlier Sunday, Lebanon's pro-Iran satellite channel Al-Mayadeen, quoting "Gulf sources," falsely reported that a series of explosions had struck Fujairah's port. State and semi-official media in Iran picked up the report from Al-Mayadeen, which later published the names of vessels it claimed were involved.

The AP, after speaking to Emirati officials and local witnesses, found the report about explosions at the port to be unsubstantiated.

Fujairah's port is about 140 kilometers (85 miles) south of the Strait of Hormuz, the narrow mouth of the Persian Gulf through which a third of all oil at sea is traded. The facility handles oil for bunkering and shipping, as well as general and bulk cargo. It is seen as strategically located, serving shipping routes in the Persian Gulf, the Indian subcontinent and Africa. Fujairah port is the only terminal in the UAE located on the Arabian Sea coast, bypassing the Strait of Hormuz, through which most Gulf oil exports pass.

Iran has repeatedly threatened to close the strait in case of a military confrontation with the U.S.

The UAE did not accuse anyone of responsibility but warned that "carrying out acts of sabotage on commercial and civilian vessels and threatening the safety and lives of those on board is a serious development".

No one was hurt and Abu Dhabi called on world powers to help keep maritime traffic safe.

"The incidents in the Sea of Oman are alarming and regrettable," Mousavi said in an English-language statement on the ministry's website.

Mousavi was quoted by the official IRNA news agency as saying there should be more information about the incident.

He also "warned against plots by ill-wishers to disrupt regional security" and "called for the vigilance of regional states in the face of any adventurism by foreign elements," the statement added.

Almost all the oil exports of Saudi Arabia, Iraq, UAE, Kuwait, Qatar and Iran itself, at least 15 million barrels per day, are shipped through the Strait of Hormuz.

The Saudi minister denounced the attack on the vessels, saying it "aims to undermine the freedom of maritime navigation and the security of oil supplies to consumers all over the world."

He also urged the international community to "protect the safety of maritime navigation and the security of oil tankers, to mitigate against the adverse consequences of such incidents on energy markets, and the danger they pose to the global economy."

The UAE had earlier categorically denied reported on social media of massive explosions in oil tankers in the emirate.

Underling the regional risk, the general-secretary of the six-nation Gulf Cooperation Council described the alleged sabotage as a "serious escalation" in an overnight statement.

The U.S. Navy's 5th Fleet, which oversees the region, did not immediately offer comment. Emirati officials declined to answer questions from The Associated Press, saying their investigation is ongoing.

"Since early May, there is an increased possibility that Iran and/or its regional proxies could take action against U.S. and partner interests, including oil production infrastructure, after recently threatening to close the Strait of Hormuz," the warning read. "Iran or its proxies could respond by targeting commercial vessels, including oil tankers, or U.S. military vessels in the Red Sea, Bab-el-Mandeb Strait or the Persian Gulf."

Early Sunday, the agency issued a new warning to sailors about the alleged sabotage, while stressing "the incident has not been confirmed." It urged shippers to exercise caution in the area for the next week.

It remains unclear if the previous warning from the U.S. Maritime Administration is the same perceived threat that prompted the White House to order the USS Abraham Lincoln aircraft carrier strike group and B-52 bombers to the region on May 4.

The Pentagon said Friday that it was deploying an amphibious assault ship and a Patriot missile battery to the Middle East to bolster an aircraft carrier force sent to counter alleged Iranian threats.

The increasing tensions come after Tehran said Wednesday it had stopped respecting limits on its nuclear activities agreed under a 2015 deal with major powers, warning it would begin enriching uranium at higher levels in 60 days if world powers failed to negotiate new terms for the deal.

Iran said it was responding to the sweeping unilateral sanctions that Washington has reimposed since it quit the agreement one year ago, which have dealt a severe blow to the Iranian economy.

Pompeo revised his travel plans to include a visit to Brussels on Monday to hold talks with French, British and German officials on "pressing matters" including Iran, a State Department official said

As a result, the top U.S. diplomat is scrapping a stop expected on Monday in Moscow, but will still head to the Russian Black Sea resort of Sochi on Tuesday to meet President Vladimir Putin and Foreign Minister Sergei Lavrov.