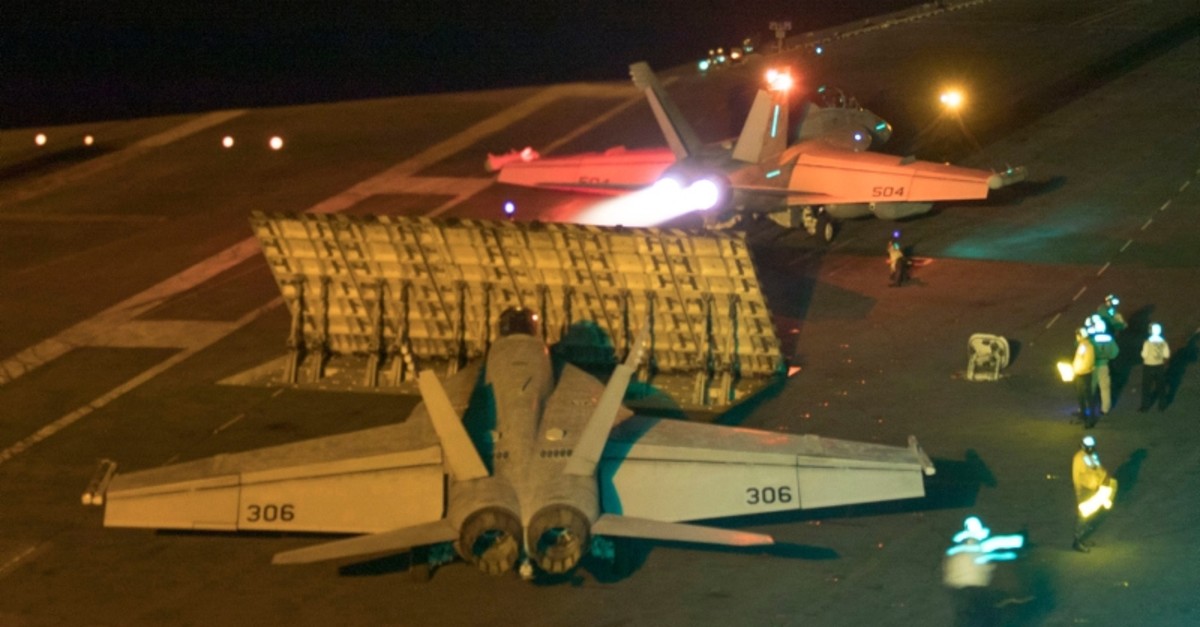 In this May 10, 2019 photo released by the U.S. Navy, an F/A-18E Super Hornet launches from the flight deck the Nimitz-class aircraft carrier USS Abraham Lincoln in the Persian Gulf. (Mass Communication Specialist Seaman Dan Snow, U.S. Navy via AP)
by Associated Press
May 18, 2019 1:26 pm

U.S. diplomats warned Saturday that commercial airliners flying over the wider Persian Gulf faced a risk of being "misidentified" amid heightened tensions between the U.S. and Iran.

The warning relayed by U.S. diplomatic posts from the Federal Aviation Administration underlined the risks the current tensions pose to a region crucial to global air travel. It also came as Lloyd's of London warned of increasing risks to maritime shipping in the region.

Concerns about a possible conflict have flared since the White House ordered warships and bombers to the region to counter an alleged, unexplained threat from Iran that has seen America order nonessential diplomatic staff out of Iraq. President Donald Trump since has sought to soften his tone.

Meanwhile, authorities allege that a sabotage operation targeted four oil tankers off the coast of the United Arab Emirates, and Iran-aligned rebels in Yemen claimed responsibility for a drone attack on a crucial Saudi oil pipeline.

Saudi Arabia directly blamed Iran for the drone assault, and a local newspaper linked to the Al Saud royal family called on Thursday for America to launch "surgical strikes" on Tehran.

This all takes root in Trump's decision last year to withdraw the U.S. from the 2015 nuclear accord between Iran and world powers and impose wide-reaching sanctions. Iran just announced it would begin backing away from terms of the deal, setting a 60-day deadline for Europe to come up with new terms or it would begin enriching uranium closer to weapons-grade levels. Tehran long has insisted it does not seek nuclear weapons, though the West fears its program could allow it to build atomic bombs.

The White House however has sent mixed signals in recent days, amid multiple U.S. media reports of infighting in Trump's cabinet over how hard to push Washington's arch foe.

According to U.S. media reports, Trump's long-hawkish national security advisor John Bolton is pushing a hard line on Iran, but others in the administration are resisting.

The White House and Pentagon have been under pressure to demonstrate the reason for the huge buildup in forces and heightened rhetoric of the past two weeks.

U.S. coalition partners in Iraq had suggested earlier this week that the threat level there had not risen significantly, and members of Congress demanded to see the information behind the administration's apparent preparation for possible conflict.

The order relayed Saturday by U.S. diplomats in Kuwait and the UAE came from an FAA Notice to Airmen published late Thursday in the U.S. It said that all commercial aircraft flying over the waters of Persian Gulf and the Gulf of Oman needed to be aware of "heightened military activities and increased political tension."

This presents "an increasing inadvertent risk to U.S. civil aviation operations due to the potential for miscalculation or misidentification," the warning said. It also said aircraft could experience interference with its navigation instruments and communications jamming "with little to no warning."

The Persian Gulf has become a major gateway for East-West travel in the aviation industry. Dubai International Airport in the United Arab Emirates, home to Emirates, is the world's busiest for international travel, while long-haul carriers Abu Dhabi-based Etihad and Doha-based Qatar Airways also operate here.

In a statement, Emirates said it was aware of the notice and in touch with authorities worldwide, but "at this time there are no changes to our flight operations."

Qatar Airways similarly said it was aware of the notice and its operations were unaffected.

Etihad, as well as Oman Air, did not respond to a request for comment Saturday about the warning.

The warning appeared rooted in what happened 30 years ago after Operation Praying Mantis, a daylong naval battle in the Persian Gulf between American forces and Iran during the country's long 1980s war with Iraq. On July 3, 1988, the USS Vincennes chased Iranian speedboats that allegedly opened fire on a helicopter into Iranian territorial waters, then mistook an Iran Air heading to Dubai for an Iranian F-14. The Vincennes fired two missiles at the airplane, killing all aboard the flight.

Meanwhile, Lloyd's Market Association Joint War Committee added the Persian Gulf, the Gulf of Oman and the United Arab Emirates on Friday to its list of areas posing higher risk to insurers. It also expanded its list to include the Saudi coast as a risk area.

The USS Abraham Lincoln and its carrier strike group have yet to reach the Strait of Hormuz, the narrow mouth of the Persian Gulf through which a third of all oil traded at sea passes. A Revolutionary Guard deputy has warned that any armed conflict would affect the global energy market. Iran long has threatened to be able to shut off the strait.