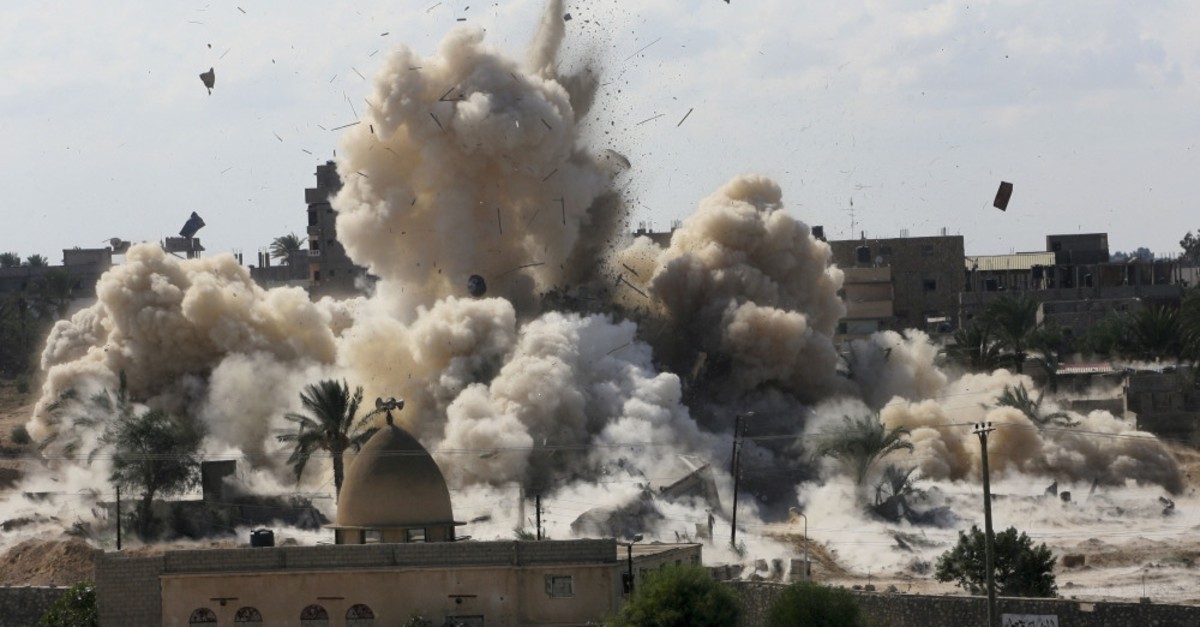 Egyptian security forces have committed war crimes against civilians in the restive northern Sinai Peninsula, a leading international rights group said Tuesday, urging other nations to halt military support to President Abdel-Fattah el-Sissi's relentless attacks on civilians. In a 134-page report entitled "If You Are Afraid for Your Lives, Leave Sinai!" Human Rights Watch (HRW) revealed gross violations of human rights in the marginalized territory, including arbitrary arrests, enforced disappearances, torture, extrajudicial killings, and possibly unlawful air and ground attacks against civilians. "While the Egyptian military and police forces were responsible for the majority of abuses documented in the report, extremist militants have also committed horrific crimes," the New York-based group said in its 134-page report.

"Some of the abuses carried out by government forces and the militants, which this report documents, are war crimes, and their widespread and systematic nature could amount to crimes against humanity."

Recalling the repeated warnings of the U.N. over growing humanitarian crisis in the area, HRW slammed el-Sissi's counterterrorism strategy in the area as "unlawful" and "counterproductive, alienating the very local communities they are allegedly protecting and generating support for extremist and armed groups."

The northern part of the Sinai Peninsula that borders Israel and the Gaza Strip has witnessed ongoing violent battles between the Egyptian military, police and Daesh-affiliated terrorists since 2011. The terrorist organization has intensified attacks in northern Sinai, especially following the army's 2013 overthrow of the first democratically elected president, Mohammed Morsi. One of the most significant attacks on military personnel took place in October 2014, killing at least 33 soldiers. The attack was a turning point for the Egyptian government's strategy on Daesh. Consequently, el-Sissi intensified the struggle against the group by declaring a state of emergency in northern Sinai. In February last year, Egypt began a massive operation, mainly focused on northern Sinai but also on parts of Egypt's Nile Delta and the Western Desert along the porous border with Libya.

Access to northern Sinai has been restricted for years, making it difficult to independently verify what is happening on the ground. According to a tally of death tolls given by the armed forces, around 650 terrorists and about 45 soldiers have since been killed. HRW estimated at least 3,076 alleged terrorists and 1,226 members of the security forces were killed in fighting between January 2014 and June 2018. The report also underscored that Egyptian authorities frequently counted civilians among the alleged terrorists killed and that hundreds of civilians have been killed or wounded in the violence.

The rights group called on the U.S. and France to halt all military assistance to Egypt until gross violations are fully investigated. "Instead of protecting Sinai residents in their fight against militants, the Egyptian security forces have shown utter contempt to residents' lives, turning their daily life into a nonstop nightmare of abuses," said Michael Page, the group's deputy Middle East director. "This horrific treatment of Sinai residents should be another wake-up call to countries like the U.S. and France that heedlessly endorse Egypt's counterterrorism efforts." Israel is also among the countries aiding the Egyptian government through allowing a build-up of Egyptian military presence in the area and participating in airstrikes.