Florida Cabinet meets in Israel despite complaints over illegality of session 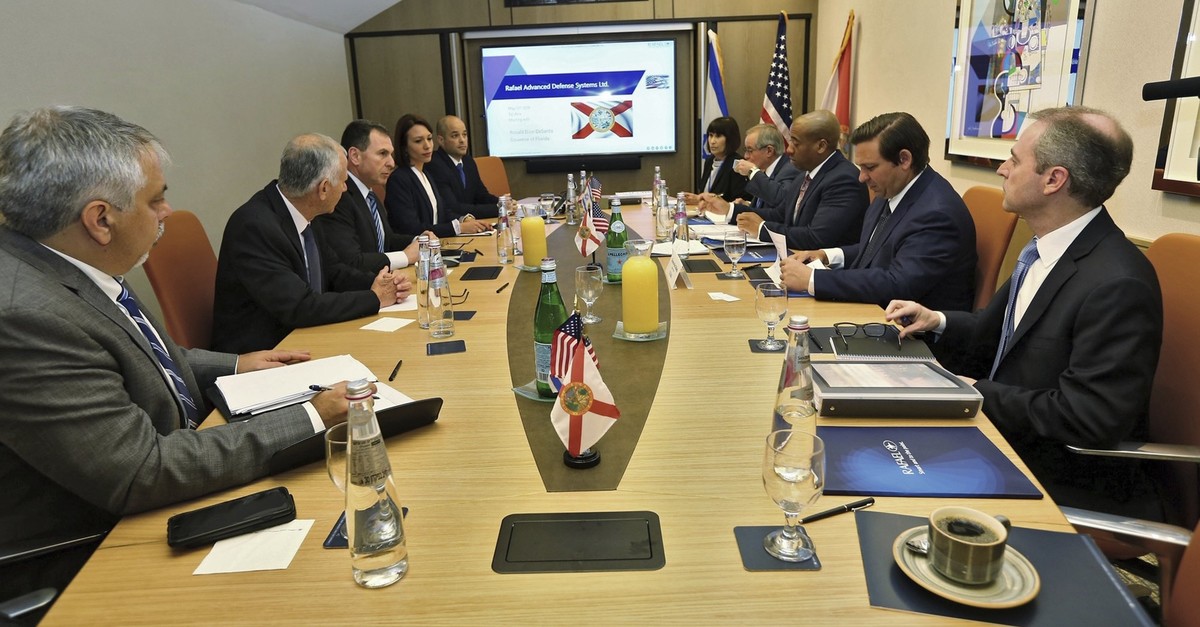 Florida Gov. Ron DeSantis, second from right, meets with representatives of Rafael, a military and defense technologies development firm, during a trade visit to Israel Monday May 27, 2019. (AP Photo)
by Associated Press May 30, 2019 1:55 am

Gov. Ron DeSantis and his Cabinet met in Israel on Wednesday, waving away complaints that the session violated Florida's open-government laws because it was held outside the state. They presented a proclamation of support for Israel and heard from Israelis on several issues important to Florida.

The Republican governor then signed a bill that prohibits anti-Semitism in Florida's public schools and universities. The new law defines anti-Semitism as including "drawing comparisons of contemporary Israeli policy to that of the Nazis," ''blaming Israel for all interreligious or political tensions," or "requiring behavior of Israel that is not expected or demanded of any other democratic nation."

DeSantis called the meeting historic, but the open-government watchdog organization First Amendment Foundation and several news outlets sued in an effort to stop it, claiming it violated a state law that requires government meetings to be accessible to the public.

DeSantis didn't acknowledge the lawsuit during the meeting, but quipped, "Since we're in Jerusalem, we may actually get some interest in our Cabinet meetings for a change, which would be great."

At an earlier briefing, he called the lawsuit "frivolous" and said the event was being livestreamed, "so it's not being done in secret."

A judge was asked Tuesday to stop the meeting, but the emergency motion was denied because lawyers for DeSantis and the three independently elected Cabinet members could not be served with court papers. First Amendment Foundation President Barbara Petersen said after the Cabinet meeting that she will still ask the judge to rule the meeting was a violation of law and ask for an order saying future meetings can't be held out of state.

"Just don't do this, that's the point. Don't do it," Petersen said. "The issue is holding a Cabinet meeting somewhere other than Florida."

The Cabinet is made up of Attorney General Ashley Moody, Chief Financial Officer Jimmy Patronis and Agriculture Commissioner Nikki Fried. The meeting was part of a four-day trade mission to Israel. They heard from Israelis on issues also important to Florida, including maintaining a stable water supply, preparing emergency responses and terrorism.

The meeting was live-streamed by The FLORIDA Channel, a state-funded television station based in the Florida Capitol. It was broadcast in the Cabinet's usual meeting room and accommodations were made in the event members of the public wanted to comment on the proceedings.

But the Cabinet room was largely empty beyond staff and reporters, and technical glitches hampered the broadcast.

The meeting opened with a prayer given by administrative law Judge Bob Cohen, who was in the Tallahassee meeting room. But the conference call dropped the connection in the middle of the prayer.

As staff tried to reconnect, they repeatedly punched in the wrong code number. DeSantis and the Cabinet sat waiting for a reconnection as an automated voice said over and over, in Tallahassee and Jerusalem, "I'm sorry, I did not recognize that conference code. Please try again."

DeSantis then asked Patronis to say the prayer instead.