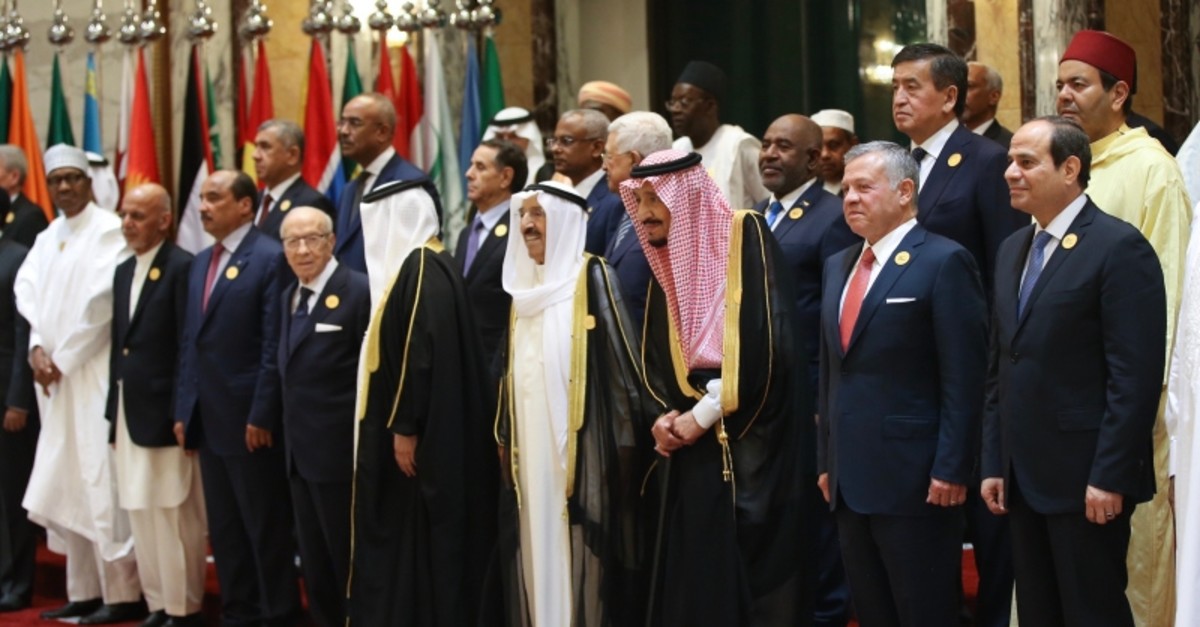 The Organization of Islamic Cooperation (OIC) has rejected any proposal for a peace settlement that does not conform with Palestinian rights.

In its final communiqué on Saturday, the OIC summit held in the Saudi city of Mecca condemned "any illegal and irresponsible decision that recognizes Jerusalem as the capital of Israel", including a recent U.S. decision.

It called on 57 OIC member states to take "appropriate measures" against countries that recognize the holy city as Israel's capital.

The OIC summit reiterated "rejection of any proposal for peace settlement that does not accord or conform with the legitimate, inalienable rights of the Palestinian people".

In December 2017, U.S. President Donald Trump recognized Jerusalem as capital of Israel -- a move that sparked wide international condemnation, including from the U.N. – and in May 2018, transferred the US embassy from Tel Aviv to Jerusalem. Guatemala followed suit soon afterwards.

Jerusalem remains at the heart of the decadeslong Middle East dispute, with Palestinians hoping that East Jerusalem -- occupied by Israel since 1967 -- might one day serve as the capital of a Palestinian state.

The OIC summit also called on international stakeholders to "engage in a multi-party political path aimed at launching a credible peace process under international sponsorship."

Ever since Trump's controversial decision to recognize Jerusalem as Israel's capital, the Palestinian leadership in Ramallah has rejected any U.S. role in Middle East peacemaking.

Trump's son-in-law and senior aide Jared Kushner prepares to roll out economic aspects of his long-awaited back-channel plan for Middle East peace during a workshop in Bahrain later this month.

Based on leaks in the media, the "deal of the century" will call on the Palestinians to make major concessions to Israel regarding Jerusalem's status and the right of Palestinian refugees to return to their homes in historical Palestine.

The plan has already been rejected by the Palestinians, who say the president's policies have shown him to be overwhelmingly biased in favor of Israel.

Kushner, who was in Jerusalem on Friday on the latest leg of a regional tour to sell the plan, had looked to an alliance with Saudi Arabia against Iran as a way to gain Arab support.

But Saudi King Salman told leaders of the OIC countries gathered at the summit: "The Palestinian cause is the cornerstone of the works of the Organisation of Islamic Cooperation, and is the focus of our attention until the brotherly Palestinian people get all their legitimate rights.

"We reaffirm our unequivocal rejection of any measures that would prejudice the historical and legal status of Quds (Jerusalem)."

Turkey's President Recep Tayyip Erdoğan was notably absent from the key OIC summit, and the regional heavyweight was instead represented by Foreign Minister Mevlüt Çavuşoğlu. Iran's President Hassan Rouhani was also not present but sent Reza Najafi, director general of the department of international peace and security affairs, to the talks.

Erdoğan's visit would have been his first to the kingdom since the brutal murder last October of journalist Jamal Khashoggi in the Saudi consulate in Istanbul, which tarnished the international reputation of Crown Prince Mohammed bin Salman.

The cause of Palestine and Al-Quds, or Jerusalem, will always remain the core issue for all of us, Çavuşoğlu said Saturday.

"Fifty years after the foundation of OIC we are still faced with complex challenges for the future of the cause of Palestine and Al-Quds, which was the immediate reason why we established this organization in 1969."

He said a viable solution must be based on relevant U.N. resolutions and established parameters.

"We shall not accept re-writing of the history, exchanging justice with economic benefits, and disregarding dignity and legitimacy," said Çavuşoğlu.

Palestine and Al-Quds will always remain the core issue for the OIC and "any peace deal which does not provide the creation of an independent and sovereign State of Palestine, within the 1967 borders with Al-Quds Al-Sharif as its capital will be rejected by the OIC community," he said.

We will be held accountable before the ummah and Allah, if we fail to deliver our commitment to the cause of Palestine and Al-Quds, Çavuşoğlu added.

The OIC meeting, the third and final Iran-focused summit in the holy city of Mecca this week, also backed Saudi Arabia in escalating tensions with Iran, as Salman warned that "terrorist" attacks in the Gulf region could imperil global energy supplies.

"We confirm that terrorist actions not only target the kingdom and the Gulf region, but also target the safety of navigation and world oil supplies," the king told Muslim leaders.

Tehran has strongly denied involvement in any of the incidents.

In a tweet just before the start of the summit, the king vowed to confront "aggressive threats and subversive activities."

The meeting was the third international summit to be held in Saudi Arabia since Thursday. The Arab League and the Gulf Cooperation Council (GCC) met for crisis meetings in Mecca late Thursday amid rising regional tensions over Iran and called on Tehran to respect the sovereignty of Arab states and stop interfering in the affairs of countries.

The summits came after Trump's hawkish National Security Advisor John Bolton said Wednesday that Iranian naval mines were "almost certainly" responsible for the damage to the four ships off the United Arab Emirates on May 12.

The findings of a five-nation inquiry into what happened have yet to be released.

Tehran dismissed Bolton's accusation as "laughable" and accused him of pursuing "evil desires for chaos in the region."

Regional tensions have risen sharply since U.S. the Trump administration reimposed crippling unilateral sanctions against Iran, after he abandoned a landmark 2015 nuclear deal between major powers and Iran in May last year.

But Trump has appeared to soften his tone towards Tehran, saying that his government does not seek "regime change."

Apart from Palestine and Iran, the final communiqué also touched upon issues involving Muslims and predominantly-Muslim members in other parts of the world. The statement said that the OIC noted with concern growing Islamophobia in many parts of the world.

OIC said Islamophobia "as a contemporary form of racism and religious discrimination continues to grow in many parts of the world, as evident by the increase in incidents of religious intolerance, negative stereotyping, and hatred and violence against Muslims."

The inhumane situation of Rohingya Muslims was also addressed in the statement, urging a halt to violence and stressing Myanmar's government has the responsibility to protect its citizens.

The OIC summit also urged the United Sates to remove Sudan from its list of state sponsors of terrorism.