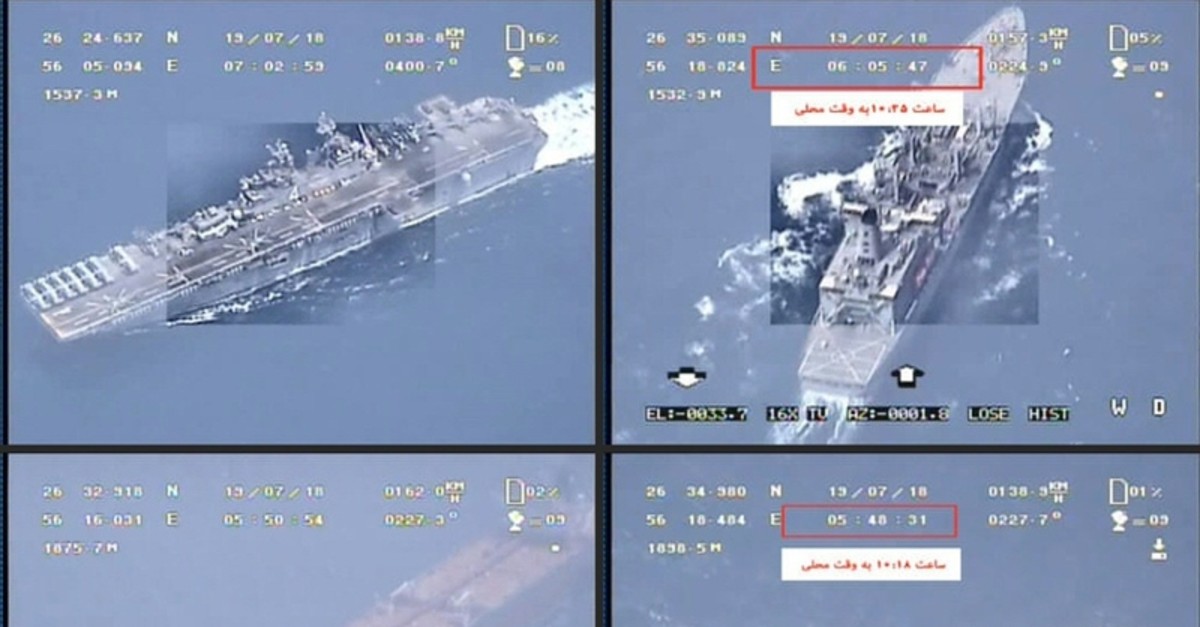 This combination of image grabs is created from a video broadcast by Iran's Islamic Revolutionary Guard Corps (IRGC) on July 19, 2019 (AFP Photo)
by Compiled from Wire Services Jul 19, 2019 9:17 pm

Britain on Friday said Iran had seized two ships in the Gulf, with Foreign Secretary Jeremy Hunt condemning the incidents as "unacceptable" and saying he was "extremely concerned" by the incidents. The second vessel was released just hours after its seizure.

"I'm extremely concerned by the seizure of two naval vessels by Iranian authorities in the Strait of Hormuz," he said in a statement. "These seizures are unacceptable."

"I will shortly attend a COBR (national security) meeting to review what we know and what we can do to swiftly secure the release of the two vessels - a British-flagged vessel and a Liberian-flagged vessel," he said.

"These seizures are unacceptable. It is essential that freedom of navigation is maintained and that all ships can move safely and freely in the region," Hunt said.

The website of Iran's Revolutionary Guard, sepahnews.com, said Friday that the tanker "Stena Impero" had been seized for "non-compliance with international maritime laws and regulations" and was taken to an Iranian port.

The tanker "was led to the shore and handed over to the organization to go through the legal procedure and required investigations," it said. The report did not say what port.

Stena Bulk and Northern Marine Management said in a statement that it "can confirm that... our managed vessel Stena Impero was attacked by unidentified small crafts and a helicopter while transiting the Strait of Hormuz while the vessel was in international waters."

"We are presently unable to contact the vessel which is now tracking as heading north towards Iran," it said.

There are 23 crew members on board, they added.

The British-flagged tanker had turned off its tracker and ignored warnings from the Revolutionary Guards, Iran's state news agency IRNA quoted a military source as saying.

"The tanker had turned off its tracker and ignored several warnings by the Guards before being captured," an unnamed military source told IRNA.

The same source told IRNA that the tanker's violations also included sailing in the wrong direction in a shipping lane and ignoring directives.

The British owner of a second tanker reportedly seized by Iranian authorities in the Gulf on Friday said the ship had been temporarily boarded by armed personnel but was now free to leave.

"Communication has been re-established with the vessel and (the captain) confirmed that the armed guards have left and the vessel is free to continue the voyage. All crew are safe and well," Norbulk Shipping U.K. said in a statement about the ship, the Mesdar.

The U.K. had said it was "urgently seeking further information and assessing the situation following reports of an incident in the Gulf," a British government spokesperson said.

The government's emergency committee convened a meeting over the report, while the U.K. Chamber of Shipping said further protection for merchant vessels must be forthcoming.

The United States accused Iran of "escalatory violence" on Friday after the Revolutionary Guard's announcement of the seizure.

"This is the second time in just over a week the U.K. has been the target of escalatory violence by the Iranian regime," National Security Council spokesman Garrett Marquis said in a statement.

"The U.S. will continue to work with our allies and partners to defend our security and interests against Iran's malign behavior," he added.

"We have patrol aircraft operating in international airspace monitoring the situation within the Strait of Hormuz," said Lieutenant Colonel Earl Brown, a U.S. Central Command spokesman.

"U.S. Naval Forces Central Command has been in contact with U.S. ships operating in the area to ensure their safety," Brown said.

The announcement came just hours after Gibraltar's Supreme Court announced it would extend by 30 days the detention of an Iranian tanker seized two weeks ago on allegations that it was headed to Syria in violation of sanctions.

British authorities' detention of the Grace 1 supertanker sparked outrage in Tehran, which accused London of doing the bidding of Washington inaction that is "tantamount to maritime banditry."

The Guards also seized another "foreign tanker" on Thursday, believed to be the Panamanian-flagged vessel Riah and its crew, and accused the ship of smuggling Iranian fuel.

A series of such incidents have sent tensions soaring between Iran on one side and the U.S. and its allies on the other, raising fears of a regional war in the Gulf.

Iran and the United States emphatically disagreed Friday over Washington's claim that a U.S. warship downed an Iranian drone near the Persian Gulf. American officials said they used electronic jamming to bring down the unmanned aircraft, while Iran said it simply didn't happen.

Neither side provided evidence to prove its claim.

At the White House on Friday, President Donald Trump said flatly of the Iranian drone: "We shot it down." But Pentagon and other officials have said repeatedly that the USS Boxer, a Navy ship in the Strait of Hormuz, actually jammed the drone's signal, causing it to crash, and did not fire a missile. The officials spoke on condition of anonymity to discuss sensitive technology.

Trump's national security adviser, John Bolton, said, "There is no question this was an Iranian drone, and the USS Boxer took it out as the president announced yesterday because it posed a threat to the ship and its crew. It's entirely the right thing to do."

In Tehran, the Iranian military said all its drones had returned safely to their bases and denied there was any confrontation with the USS Boxer, an amphibious assault ship.

The Strait of Hormuz has become a hotspot for tensions with Iran amid a spate of incidents there. It is located in the Gulf, one of the world's most important waterways for the transport of oil.