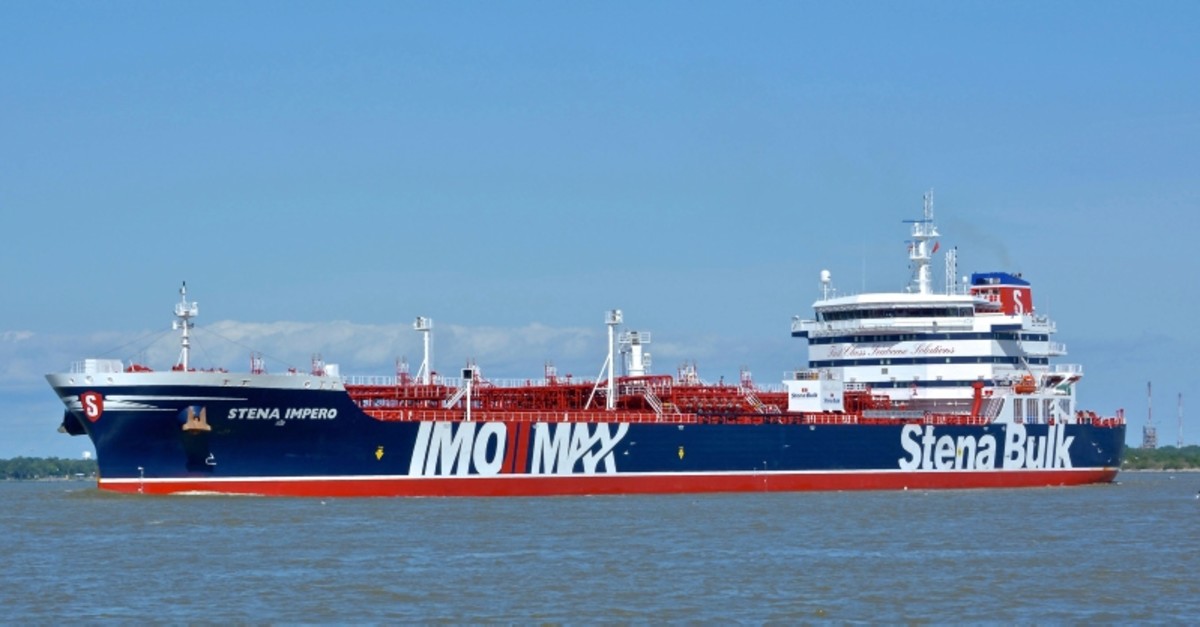 In this May 5, 2019 photo issued by Karatzas Images, showing the British oil tanker Stena Impero at unknown location, which is believed to have been captured by Iran (AP Photo)
by Associated Press Jul 20, 2019 10:15 am

Iran's seizure of a British-flagged oil tanker was allegedly due to a collision with an Iranian fishing boat, the country's state-run IRNA news agency said Saturday.

Iran's attempt to offer a "technical" explanation for seizing the tanker could signal a possible de-escalation of tensions in the strategic Strait of Hormuz, which has become a flashpoint between Tehran and the West.

Another British ship was briefly detained by Iran on Friday before being allowed to go.

The seizing of the British tanker marked perhaps the most significant escalation since tensions between Iran and the West began rising in May. At that time, the U.S. announced it was dispatching an aircraft carrier and additional troops to the Middle East, citing unspecified threats posed by Iran.

The ongoing showdown has caused jitters around the globe, with each maneuver bringing fear that any misunderstanding or misstep by either side could lead to war.

Details of what took place Friday remained sketchy after Iran reported that it had seized a British oil tanker in the Strait of Hormuz. The strait at the mouth of the Persian Gulf is a shipping channel for one-fifth of all global crude exports.

The Revolutionary Guard said Friday that the Stena Impero had been taken into port because it was not complying with "international maritime laws and regulations."

A statement from Stena Bulk, which owns the seized tanker, said it was unable to make contact with the ship after it was approached by unidentified vessels and a helicopter in international waters. A spokesman for the company's owners said the tanker was in "full compliance with all navigation and international regulations."

The company said the tanker had 23 crew members of Indian, Russian, Latvian and Filipino nationalities and there were no reports of any of them were injured.

The U.K. has featured prominently in the recent tensions with Iran. Britain's Royal Marines assisted in the seizure of an Iranian oil supertanker on July 4 by Gibraltar, a British overseas territory off the southern coast of Spain.

Britain said it would release the vessel if Iran could prove it was not breaching European Union sanctions on oil shipments to Syria.

Gibraltar's government said Friday that its Supreme Court had extended by 30 days the detention of the Panama-flagged Grace, which was loaded with over 2 million barrels of Iranian crude oil.

The owner of the Liberian-flagged tanker later said the ship was briefly boarded by armed guards before being allowed to go. Iran's semi-official Fars news agency tweeted that the Mesdar had left Iran's territorial waters.

Hunt called the seizures "unacceptable" and stressed the importance of freedom of navigation, as he prepared to enter an emergency government meeting Friday night.

"We're not looking at military options, we're looking at a diplomatic way to resolve the situation, but we are very clear that it must be resolved," Hunt later told Sky News, warning that if the situation is not resolved quickly "there will be serious consequences."

"This only goes to show what I'm saying about Iran: Trouble, nothing but trouble," he said.

Central Command said the U.S. has intensified air patrols over the Strait of Hormuz in response to the seizure.

The incident came two days after Washington claimed that a U.S. warship downed an Iranian drone in the strait. Iran denied that it lost an aircraft in the area.

On June 20, Iran shot down an American drone in the same waterway, and Trump came close to retaliating but called off an airstrike at the last moment.

Tensions in the region have been escalating since Trump withdrew the U.S. last year from Iran's 2015 nuclear deal with world powers and imposed sweeping economic sanctions on Iran, including its oil exports. The sanctions have hit the Iranian economy hard.

Iran's government has desperately tried to get out of the chokehold, pressuring the other partners in the nuclear deal, particularly European nations, to pressure the U.S. to lift the crippling sanctions.

The Europeans — Germany, France, Britain, and the European Union — want to maintain the deal, but have not been able to address Iranian demands without violating the sanctions. Iran has begun breaching some of the restrictions on its activities outlined in the agreement to put pressure on them to find a solution.

The U.S. has asked Mideast allies like Saudi Arabia and the United Arab Emirates in past weeks to contribute financially and militarily to a Trump administration proposal called the Sentinel Program — a coalition of nations working with the U.S. to preserve maritime security in the Persian Gulf and keep eyes on Iran.

Late Friday, officials said the U.S. is sending several hundred troops as well as aircraft and air defense missiles to Saudi Arabia to counter Iran. The move has been in the works for many weeks and is not a response to Friday's seizure by Iran of a British tanker.

The arrangement was announced by the Saudi government, which said it was meant to "enhance security" in the region.

Before the British ship was seized, Iran and the United States disagreed over Washington's claim that a U.S. warship downed the Iranian drone. American officials said they used electronic jamming to bring down the unmanned aircraft, while Iran said it simply didn't happen.

Neither side provided evidence to prove its claim.

At the White House, Trump said flatly of the Iranian drone: "We shot it down." But Pentagon and other officials have said repeatedly that the USS Boxer, a Navy ship in the Strait of Hormuz, actually jammed the drone's signal, causing it to crash, and did not fire a missile. The officials spoke on condition of anonymity to discuss sensitive technology.

In Tehran, the Iranian military said all its drones returned safely to their bases.

Maritime security in the Strait of Hormuz has deteriorated in recent weeks after six attacks on oil tankers that the U.S. has blamed on Iran — an allegation the Islamic Republic denies.

There was also a brief, but tense standoff between the British navy and Iranian Revolutionary Guard vessels recently. The British navy said it warned three Guard vessels away after they tried to impede the passage of a commercial British tanker that the navy was escorting.

The incidents have jolted the shipping industry, with some of the 2,000 companies operating ships in the region on high alert and many ordering their vessels to transit the Strait of Hormuz only during the daylight hours and at high speed.

Of the roughly 2,000 companies that operate ships in the Persian Gulf, only a handful of companies have halted bookings outright.

U.K.-flagged vessels represented less than 0.6% of the 67,533 ships sailing through the Strait of Hormuz in 2018, with 427 transits, according to maritime publication Lloyd's List, quoting research from Russel Group.