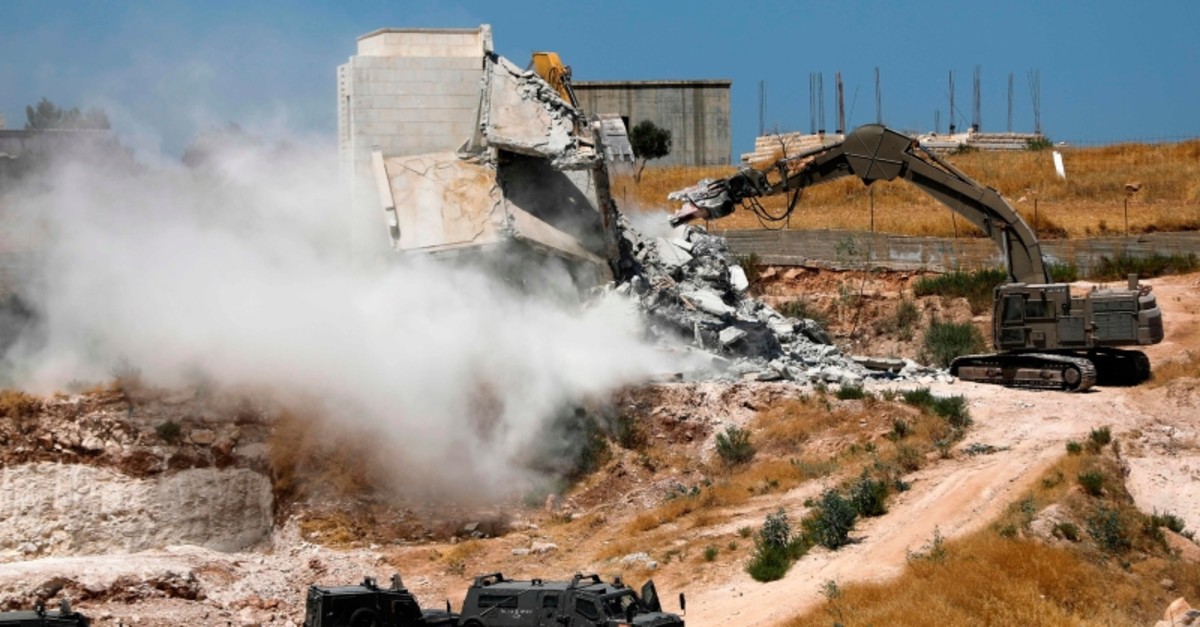 Israeli military machinery demolishes a Palestinian building in the village of Sur Baher which sits on either side of the Israeli barrier in East Jerusalem and the Israeli-occupied West Bank July 22, 2019. (AFP Photo)
by Daily Sabah with Agencies Jul 22, 2019 12:59 pm

Israeli forces on Monday began demolishing dozens of Palestinian homes in an East Jerusalem neighborhood, in one of the largest operations of its kind in years. Such actions have been called a "war crime" by the International Criminal Court (ICC).

Bulldozers accompanied by hundreds of Israeli soldiers moved into the neighborhood of Wadi Homs in the occupied city at dawn and began to raze several buildings in the area, according to residents.

"The buildings are home to 350 Palestinians, more than half of them are children," a resident, who spoke on condition of anonymity, told Anadolu Agency.

The Israeli army declared the area a military zone, preventing people and journalists from reaching it.

The Organization of Islamic Cooperation (OIC) on Monday condemned the Israeli demolition of dozens of the homes.

In a statement, the Jeddah-based grouping described the demolitions as a "serious escalation that aims to change the demographic composition" of the holy city.

It called on the international community to force Israel to refrain from "its illegal practices and violations against the Palestinian people."

The European Union on Monday urged Israel to immediately halt the demolition, saying it undermined hope for a lasting peace in the region.

"In line with the EU's long-standing position, we expect the Israeli authorities to immediately halt the ongoing demolitions," said a spokesman for the EU's foreign policy arm, which represents the bloc's 28 member states.

"The continuation of this policy undermines the viability of the two-state solution and the prospect for a lasting peace and seriously jeopardizes the possibility of Jerusalem serving as the future capital of both States."

The demolitions capped a yearslong legal battle over the buildings, built along the invisible line straddling the city and the occupied West Bank. Israel says the buildings were erected too close to its West Bank separation barrier. Residents say the buildings are on West Bank land, and the Palestinian Authority gave them construction permits.

In the wake of a recent Supreme Court decision clearing the way for the demolitions, Israeli work crews moved into the neighborhood overnight. Massive construction vehicles smashed through the roofs of several buildings, and large excavators were digging through the rubble.

He said that those who built houses along the separation barrier "took the law into their own hands."

According to the United Nations, some 20 people already living in the buildings were being displaced, while 350 owners of properties that were under construction or not yet inhabited were also affected.

The Palestinian Authority described the demolitions as part of the "deal of the century," a U.S. backchannel plan for peace Palestinians decry as an attempt to liquidate their cause. In a statement, the Ramallah-based authority held Israel fully responsible for the current escalation against unarmed Palestinians. Palestinian resistance group Hamas, for its part, described the Israeli demolitions as a "crime of ethnic cleansing." "The Israeli crimes against our people in Jerusalem are the result of U.S. support of the racist Israeli occupation," Hamas said in a statement.

Ahmed Tibi, an Arab member of the Knesset, Israel's parliament, described the demolitions as a "war crime against the Palestinian people and part of the U.S. policy of legitimizing the Israeli occupation." Last week, U.N. humanitarian coordinator Jamie McGoldrick and other U.N. officials called on Israel to halt the demolitions.

Similar to the statement released last year with regard to the possible demolition of the West Bank Bedouin village of Khan al-Ahmar, Palestinians urged ICC Chief Prosecutor Fatou Bensouda to warn Israel that such action was a "war crime." "Extensive destruction of property without military necessity and population transfers in an occupied territory constitute war crimes under the Rome Statute," Bensouda wrote in October 2018.

The latest Israeli demolition is the latest round of protracted wrangling over the future of Jerusalem, home to more than 500,000 Israelis and 300,000 Palestinians, and sites sacred to Judaism, Islam and Christianity. In 1980, the Israeli parliament passed a law declaring the "complete and united" city of Jerusalem to be the capital of Israel, including the eastern half that it captured in 1967. But the U.N. regards East Jerusalem as occupied, and the city's status remains disputed until it can be resolved by negotiations between Israel and the Palestinians, who say that east Jerusalem must be the capital of a future Palestinian state.

Sur Baher is one of those places. In negotiations with residents, Israel built the route of the structure in Sur Baher inside the West Bank to prevent dividing the village and disrupting life, according to court documents.

However, residents, claiming it is impossible to get Israeli building permits in east Jerusalem, began building the apartment buildings in the West Bank part of the village with permission from the Palestinian Authority. Early this decade, the Israeli military ordered the construction to stop, saying it could not permit high-rise buildings so close to the separation barrier.

According to Ir Amim, an Israeli advocacy group that promotes equality and coexistence in the city, Israel has stepped up demolitions of unauthorized Palestinian properties in east Jerusalem.

It said Israel demolished some 63 housing units in the first half of this year, compared to 37 during the same period last year. Palestinian residents of East Jerusalem say it is nearly impossible to get a building permit from Israeli authorities.