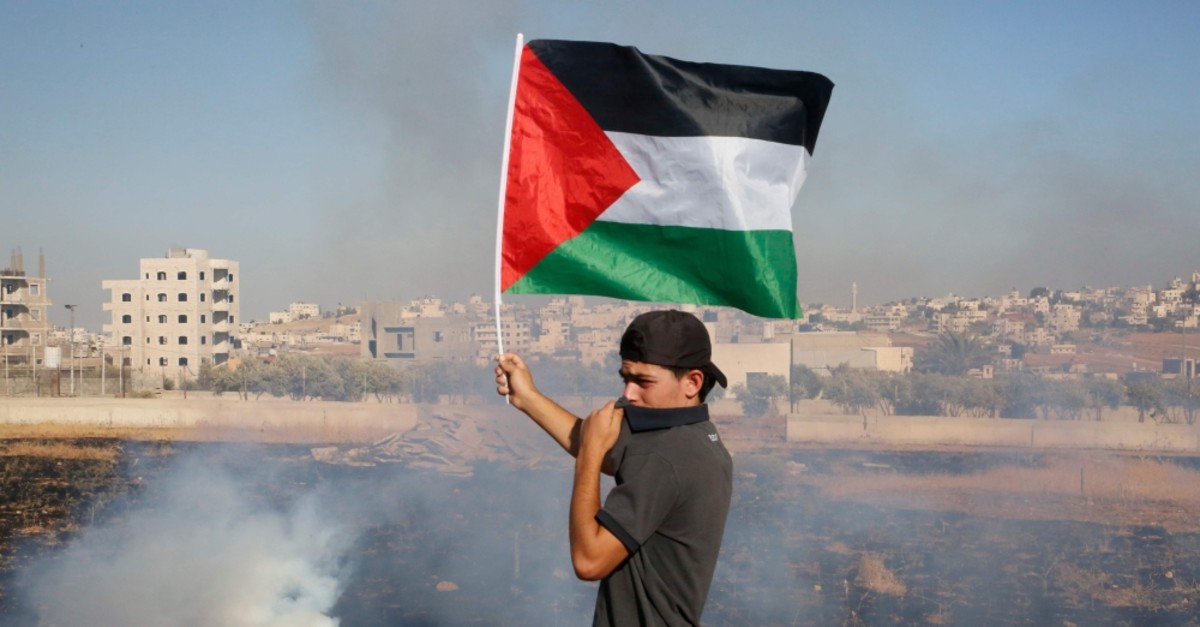 A Palestinian teen waves the national flag as he covers his face from tear gas fired by Israeli soldiers during a demonstration against the Israeli state demolishing civilian buildings in the Palestinian village of Beit Sahur in the occupied West Ban
by Daily Sabah Jul 27, 2019 12:16 am

Over a year after the start of protests at the Gaza border, the Israeli military has decided to change the rules of engagement by training snipers to "shoot at the ankles" of Palestinians. According to Israeli daily The Jerusalem Post, an Israeli official said, "It was understood that [firing at the lower half of the body above the knee] led to the deaths of many protesters."

Israel has responded to recent rallies, still held every Friday, with deadly force, killing more than 235 Palestinians and injuring thousands more. Israel was criticized by a U.N. human rights body for its killing of protesters in Gaza and for its treatment of Palestinians, declaring it a "war crime" under the Statute of Rome. The high casualty toll triggered diplomatic backlash against Israel and new charges of excessive use of force against unarmed protesters. Rights groups have branded open-fire orders as unlawful, saying they effectively permit soldiers to use potentially lethal force against unarmed protesters. In the face of growing criticism over Gaza border violence, Israeli authorities earlier said that human rights laws do not apply to ongoing Palestinian protests along the Gaza Strip.

"[The Israeli forces' decision] in no way suggests that the military attaches great value to human life," said the human rights group B'Tselem. "On the contrary, it shows that the military consciously chose not to regard those standing on the other side of the fence as humans. In its naivety, the High Court of Justice approved this practice. Both the military and the court bear the responsibility for this criminal policy."

Israeli forces deployed along the volatile border with the Gaza Strip have been firing live rounds at Palestinian protesters ever since demonstrations against Israel's long-running blockade of Gaza began in March. And during protests, Israeli snipers have targeted one part of the body more than any other – the legs.

However, Israeli forces' strategy has left a visible mark on Gaza that will likely remain for decades to come. It is now common to see young men walking through the dilapidated streets on crutches. Most have legs bandaged or fitted with a metal frame called a fixator, which uses pins or screws that are inserted into fractured bones to help stabilize them. Of the 10,511 protesters treated at hospitals and field clinics in Gaza, at least 6,392, or roughly 60%, have been struck in the lower limbs, according to a report released by the Gaza's Health Ministry in December. At least 5,884 of those casualties were hit by live ammunition; others were struck by rubber-coated metal bullets and tear gas canisters. International human rights groups have said the military's open-fire rules are unlawful because they allow the use of potentially lethal force in situations where soldiers' lives are not in immediate danger. Doctors Without Borders, known by its French acronym MSF, said most of the 3,000 patients it has treated were shot in the legs, with about a quarter suffering from infections. If left untreated, they can lead to lifelong disabilities or limb amputations. Gaza's Health Ministry said it has carried out 94 amputations since the protests began, 82 of them involving lower limbs.