20 killed as bomb-laden car crashes into vehicles in Cairo 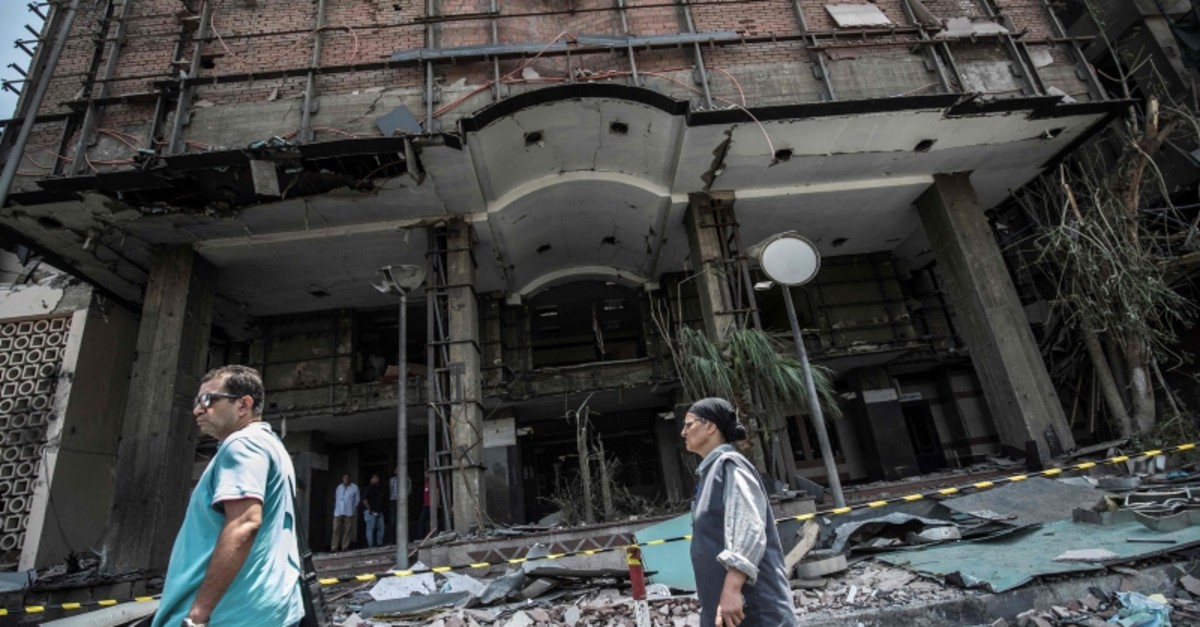 Egyptians walk outside the National Cancer Institute in the capital Cairo on August 5, 2019, where an accident took place just before midnight the previous day. (AFP Photo)
by Associated Press Aug 05, 2019 8:20 am

A car packed with explosives being driven to carry out an attack collided with other vehicles and exploded in central Cairo outside Egypt's main cancer hospital, killing at least 20 people, the Interior Ministry said Monday.

Authorities had initially said the deaths were caused by a multi-vehicle accident Sunday night on the busy Corniche boulevard along the Nile River, with no explanation of how it caused an explosion that damaged the hospital's facade and even rooms inside.

But later Monday, the ministry later acknowledged that a car bomb was involved. It accused a militant group known as Hasm, saying it was moving the car — stolen in the Nile Delta — to carry out an attack elsewhere. The ministry did not say what the intended target was.

President Abdel-Fattah el-Sissi called it a "terrorist incident" in a tweet, expressing condolences for the dead and vowed to "face and root out terrorism."

The explosion injured 47 others, some of them with burns and broken bones, the Health Ministry said. It did not say if any hospital patients or staff were among the casualties. At least 78 patients were evacuated to other hospitals.

The blast damaged the cancer hospital's main gate and several patient rooms and wards, according to a statement from the Cairo University, whose medical school uses the institution as an educational facility. Windows and glass doors on the hospital building were shattered.

"Parts of the ceiling of the hospital were collapsing as I got out of my room," said one patient, Mahmoud el-Sayed. "People were running everywhere and shouting."

Multiple vehicles on the street were damaged, burning those inside, said another witness, Mohamed Ashraf. "People were struggling to get the passengers out," he said.

In its initial account of the explosion, the Interior Ministry said a vehicle was driving against traffic on the boulevard and collided with up to three other cars, causing an explosion. It didn't elaborate when it later announced the car bomb, and it was not clear which vehicle in that scenario was the vehicle with explosives.

The police quickly cordoned off the area of the crash, as prosecutors began an investigation. Unidentified body parts were being collected in a body bag from the site, Health Minister Hala Zayed said in TV comments.

The hospital is close to Cairo's Tahrir Square, which became known internationally as the scene of mass protests in the 2011 uprising that toppled autocrat Hosni Mubarak.

After the blast, some patients with appointments Monday were left stranded, waiting outside the hospital with their relatives. Ahmed Ramadan, a farmer, had brought his daughter from their home 145 kilometers (90 miles) south of Cairo for chemotherapy.