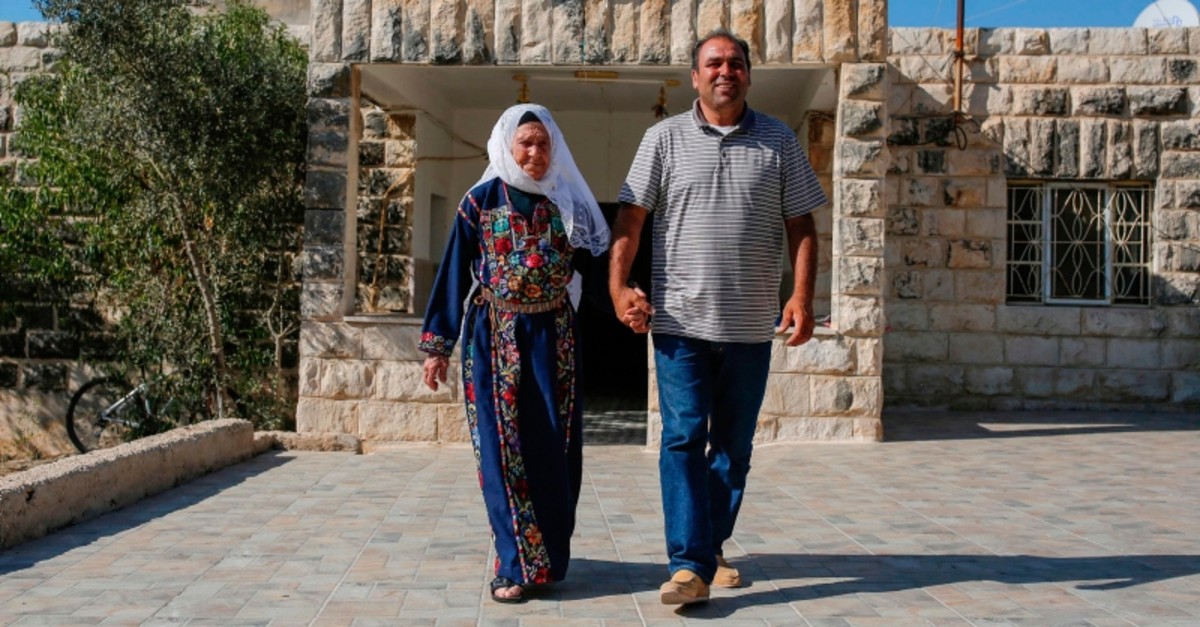 Muftia Tlaib, the maternal grandmother of U.S. Congresswoman Rashida Tlaib, walks with her son Bassam (R) outside their home in the village of Beit Ur al-Fouqa, in the occupied West Bank on August 15, 2019. (AFP Photo)
by Compiled from Wire Services Aug 16, 2019 1:45 pm

Palestinian-American lawmaker Rashida Tlaib on Friday rejected Israel's offer to allow her to visit her grandmother in the West Bank, blasting the "oppressive conditions" set for the visit as humiliating.

"I have decided that visiting my grandmother under these oppressive conditions stands against everything I believe in -- fighting against racism, oppression & injustice," Tlaib said in a series of tweets.

On Thursday, Israel rejected a visit by the U.S. Congress' first two Muslim women lawmakers, Tlaib of Michigan and Ilhan Omar of Minnesota, on the grounds that they support a boycott of the country over its treatment of the Palestinians. Israel's decision came after President Donald Trump said in a tweet it would show "weakness" to allow in the two Democrats who have been sharply critical of him and of Israel's policies toward the Palestinians. That notion was reinforced by Israel's ex-ambassador to Washington Danny Ayalon, who tweeted that his government had "rightfully decided to accept that recommendation" from Trump.

But early Friday, Israel reversed course on Tlaib, saying she could visit her grandmother in the West Bank, on the grounds that the 43-year-old first-term congresswoman agrees to not promote a boycott against Israel.

"When I won, it gave the Palestinian people hope that someone will finally speak the truth about the inhumane conditions," Tlaib wrote Friday.

"I can't allow the State of Israel to take away that light by humiliating me & use my love for my sity to bow down to their oppressive & racist policies," she said, referring to her grandmother.

"Silencing me & treating me like a criminal is not what she wants for me. It would kill a piece of me."​

Israel's Interior Minister Aryeh Deri's office published what it said was Tlaib's written request, on congressional stationery. In the letter, Tlaib said she will visit her Palestinian relatives," and specifically my grandmother, who is in her 90s and lives in Beit Ur al-Fouqa. She also said she would "respect any restrictions and "not promote boycotts" during her visit.

Tlaib and Omar had planned to visit Jerusalem and several West Bank cities, starting this weekend. Both are known as supporters of "boycott, divestment and sanctions," or BDS, a Palestinian-led global movement. Israel alleges that BDS targets Israel's very existence, while the movement's supporters say it is intended as leverage to end more than half a century of Israeli military rule over Palestinians, decadeslong Israeli blockade on Gaza Strip and Israel's continued construction of settlements in the West Bank which are illegal under international law.

Deri's office said in a statement that he "decided to allow her entry to Israel and hopes she will stand by her commitment and that the visit will be for humanitarian needs only."

"I approved (the request) on humanitarian grounds, but it turns out that it was a provocation to embarrass Israel. Her hatred for Israel overcomes her love for her grandmother," Deri tweeted following Tlaib's decision to scrap the visit.

Tlaib was born in Detroit to Palestinian parents who had immigrated to the United States. Beit Ur al-Fouqa is a town west of Ramallah in the Palestinian territories.

Relatives of Tlaib in the family's village had been excited about her planned visit.

"We are preparing a party for her" and her fellow congresswoman, said Tlaib's 85-year-old grandmother, Muftia Tlaib, in the yard of the family's stone home surrounded by olive trees.

Tlaib's apparent pledge to conduct the visit in line with restrictions imposed by Israel was bound to anger Palestinians who had hoped the congressional tour would highly their plight.

Senior Palestinian official Hanan Ashrawi labeled the ban "an outrageous act of hostility against the American people and their representatives".

Israel's decision to ban the two had sparked widespread criticism, including from Israeli and Jewish organization who said it was an affront to U.S. institutions to bar the entry of members of Congress.

While the group's members "disagree" with support by Omar and Tlaib for a boycott on Israel, AIPAC said "we also believe every member of Congress should be able to visit and experience our democratic ally Israel firsthand."

Senate Minority Leader Chuck Schumer, a staunch Israel ally on Capitol Hill, called the decision "a sign of weakness (that) will only hurt the U.S.-Israeli relationship and support for Israel in America."

House Speaker Nancy Pelosi herself has clashed with Omar and Tlaib, who have been accused of anti-Semitic and anti-Israel statements. But Pelosi, the top Democrat in Congress, called the travel ban "beneath the dignity of the great State of Israel."

Elizabeth Warren, a leading candidate for the Democratic nomination, said: "Israel doesn't advance its case as a tolerant democracy... by barring elected members of Congress from visiting."

The two congresswomen, along with two other progressive congressional allies, Alexandria Ocasio-Cortez and Ayanna Pressley -- known collectively as "The Squad," have been in Trump's crosshairs.

He has taken aim at all four in a series of xenophobic comments, telling them to "go back" where they came from and accusing them of "love" for America's "enemies like Al-Qaeda".

The House of Representatives voted to condemn anti-Semitism in March, after a series of Omar remarks that were criticized as offensive to Israel and Jews. But colleagues rushed to their defense Thursday, angrily opposing the Israeli ban that Omar herself described as "chilling."

Several lawmakers expressed alarm at Trump's deviation from traditional diplomatic protocol, saying his interference will only drive a wedge between the longstanding allies and undermine the bipartisan basis for congressional support.

"The Trump Administration made a mistake in urging Israel to prevent them from entering the country," said Senator Susan Collins, one of the only Republican lawmakers to openly break with Trump over the incident.

Trump himself insisted it was Israel's call.

"What they've said is disgraceful, so I can't imagine why Israel would let them in," Trump told reporters of the lawmakers. "But if they want to let them in, they can."

While most Republicans laid low, some support for Netanyahu's move, and Trump's intervention, trickled out.

"Israel bars enemies from entering Israel," the Alabama Republican added. "How can anyone disagree with that?"​