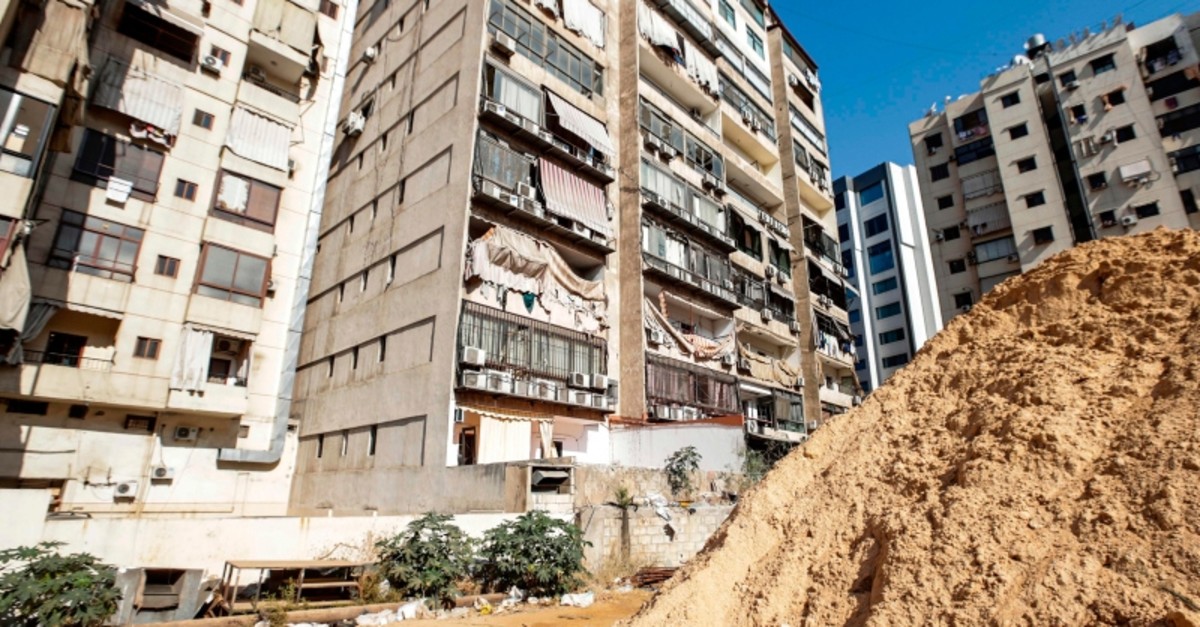 This picture taken on August 25, 2019 shows damage to a building housing a media center of the Lebanese Shiite group Hezbollah in the south of the capital Beirut, after two drones came down in its vicinity earlier in the day. (AFP Photo)
by Associated Press Aug 25, 2019 11:41 am

Two Israeli drones crashed in a Hezbollah stronghold in the Lebanese capital overnight without the militants firing on them, a spokesman for the group said Sunday, saying the first fell on the roof of a building housing Hezbollah's media office while the second landed in a plot behind it.

He said a second drone, which appeared to have been sent by Israel to search for the first one less than 45 minutes later, exploded in the air and crashed in an empty plot nearby, causing damage to nearby buildings. Residents said they heard a loud blast.

"We did not shoot down or explode any of the drones," Afif told The Associated Press.

"The first drone did not explode and it is now in the possession of Hezbollah which is analysing it," he added in remarks carried by Lebanon's National News Agency.

He said Hezbollah leader Hassan Nasrallah will give the "appropriate" response in a previously-scheduled televised appearance later Sunday.

AP journalists on the scene Sunday said the 11-floor building that houses Hezbollah's media office as well as nearby buildings suffered minor damage and broken glass. On the second floor, where the group has its offices, shattered glass littered the floors and some of the desks were overturned. A portrait of Nasrallah was on the floor.

Israeli warplanes regularly violate Lebanese airspace and have struck inside neighboring Syria from Lebanon on several occasions, angering Hezbollah and Lebanese officials, who have complained to the United Nations in the past.

"The new aggression... constitutes a threat to regional stability and an attempt to push the situation towards further tension," Lebanese Prime Minister Saad Hariri said in a statement from his office. Hariri also charged that it was in violation of U.N. Security Council Resolution 1701 that ended a 2006 war between Israel and Lebanon's Hezbollah.

Late Saturday, Israeli warplanes struck targets in Aqraba, southeast of the Syrian capital in what the Israeli military said was a successful effort to thwart an imminent Iranian "killer" drone strike on Israel. The late-night airstrike, which triggered Syrian anti-aircraft fire, appeared to be one of the most intense attacks by Israeli forces in several years.

It was not immediately clear if the incidents in Syria and Lebanon were related. There was no immediate Israeli comment on Hezbollah's remarks.

Israel has carried out hundreds of attacks in recent years targeting Hezbollah and other Iranian targets in Syria. Israel views Iran as its greatest threat and has said it will not tolerate a permanent Iranian presence in Syria or the transfer of advanced weapons to Hezbollah.

Iran and Hezbollah are key military allies of Bashar Assad in that country's eight-year-old civil war.

In recent days, U.S. officials have said that Israeli strikes have also hit Iranian targets in Iraq in what would be a significant expansion of Israel's campaign targeting Iranian military entrenchment in the region.

Hezbollah and Israel fought a monthlong war in 2006 that killed 1,200 in Lebanon and 160 in Israel. The volatile border between the two countries, which remain technically in a state of war, has been mostly calm since.