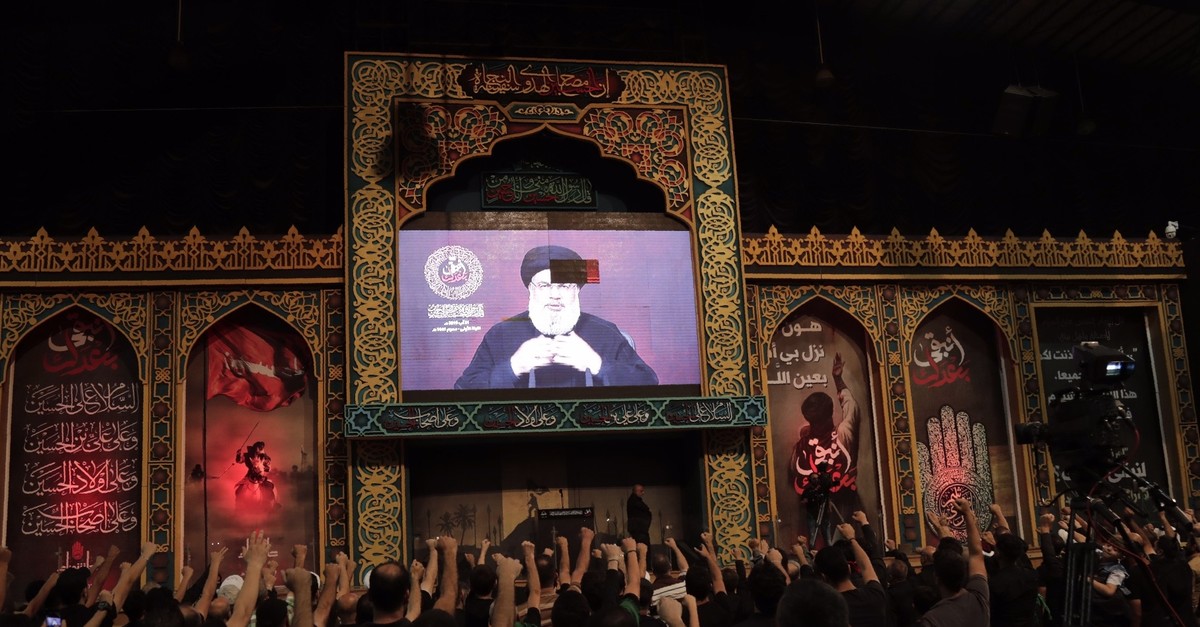 Supporters of the Lebanese Shiite Hezbollah movement gather to watch the transmission of a speech by the movementu2019s leader Hasan Nasrallah, Beirut, Aug. 31, 2019.
by Yusuf Selman İnanç Sep 02, 2019 12:08 am

While Israel and Hezbollah have exchanged harsh words and accusations since the Syrian civil war started, current circumstances may lead to a further increase in tensions

In the last few days, Israel and Hezbollah have started threatening each other, leading to fears of another conflict in the Middle East. While Israeli drones targeted Hezbollah and other Iran-backed groups, the former claims that it has the ability to respond to Israeli attacks. It is certain that the unending Syrian war has renewed the so-called Iranian-Israeli conflict along with proxy groups. Hezbollah's leader Hasan Nasrallah said Israel would face repercussions for its drone attacks. According to Nasrallah, Hezbollah's field commanders were ready to respond to Israel and retaliation was "inevitable."

In response, the Israeli Defense Forces (IDF) canceled a military exercise and started consolidating their presence near the Lebanese border. A Jerusalem Post report over the weekend stated, "In addition to the reinforcement of artillery batteries, Iron Dome batteries have been deployed and leave for combat soldiers in the area has been canceled. The IDF has also closed airspace to civilian flights, closed the civilian airport in Kiryat Shmona and has put the navy on high alert."

Amid fears of a serious escalation, Israel and Hezbollah exchanged fire yesterday along the Lebanese border. The Israeli military said anti-tank missiles from Lebanon targeted an army base and vehicles in the area and that it responded with fire into southern Lebanon. Hezbollah said its fighters destroyed an Israeli military vehicle, killing or wounding those inside.

Israel has been arguing that Iran's presence in Syria is a direct threat to its national security but took no action until Iran and the regime retook much of the territories from opposition groups and started deploying more troops near the Golan Heights, which is under Israeli occupation. With no effect on the course of the war, Israel has been carrying out airstrikes on Iranian groups as well as regime bases, despite Russia's reservations. But now, tensions are more escalated than ever. Israel has increased and intensified the attacks, mostly using drones. It is reported that Israeli forces even targeted certain Iran-backed groups in Iraq.

For instance, the Israeli army claimed that Iran and Hezbollah were in a rush to complete a precision guided-missile project over the past year. Although Hezbollah denies the existence of this alleged project, Israeli Prime Minister Benjamin Netanyahu said last week: "We are determined to foil this dangerous project. The aim of the publication is to show that we will not stand idly by as our enemies equip themselves with deadly weapons." He has also revealed details about the project, showing that Hezbollah may target Israeli soil or some lands that are under Israeli occupation.

Israel and Hezbollah clashed in 2006 for a month and have always struggled to remove each other from the region. But this time it is different. The U.S. administration has supported Israel in its occupation in the Golan Heights. Therefore, Israel has been increasing its military presence near both Lebanese and Syrian territories, where Hezbollah is very active. On the other hand, Hezbollah has been allying itself with the Lebanese central government and has gained a considerable position in the Lebanese parliament. Therefore, the accusations and menaces may go further this time.