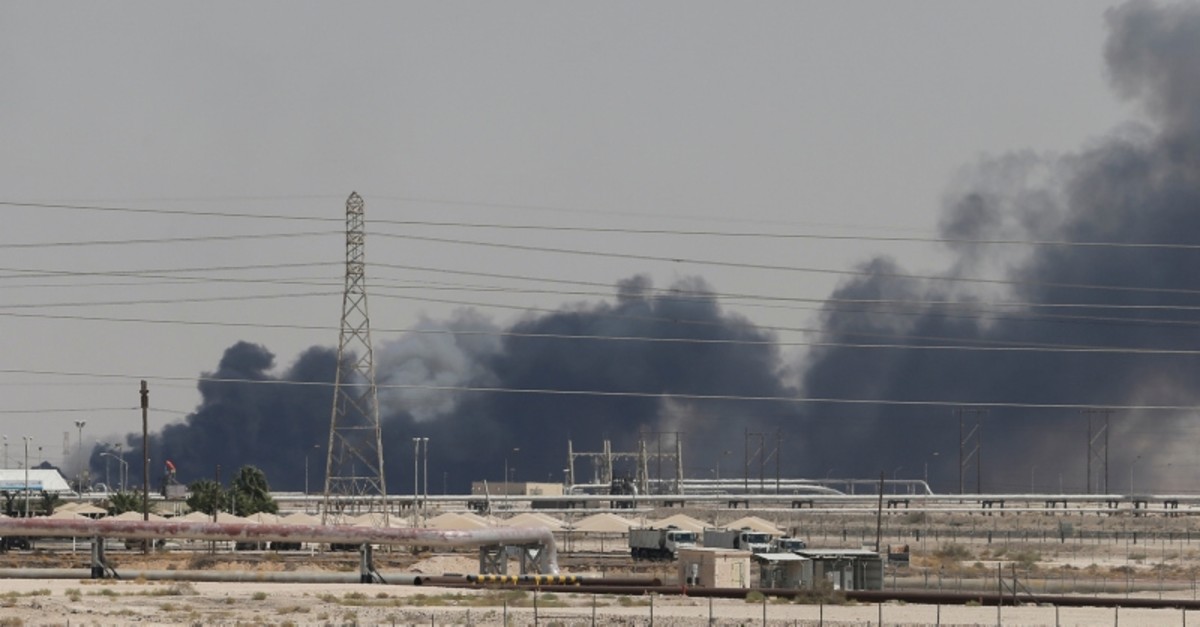 Yemen's Houthi group claimed responsibility for drone attacks, the group's military spokesman said on Al Masirah TV. The broadcaster said the Houthis had deployed 10 drones in their coordinated against the sites in Buqyaq and the Khurais.

Military spokesman Yahia Sarie warned attacks by the rebels would only get worse if the war continues.

"The only option for the Saudi government is to stop attacking us," Sarie said.

"Tehran is behind nearly 100 attacks on Saudi Arabia while Rouhani and Zarif pretend to engage in diplomacy," Pompeo said in a tweet, calling the incident "an unprecedented attack on the world's energy supply."

"There is no evidence the attacks came from Yemen," Pompeo added.

It wasn't clear if there were any injuries in the attacks, nor what effect it would have on oil production in the kingdom. The attack also likely will heighten tensions further across the wider Persian Gulf amid a confrontation between the U.S. and Iran over its unraveling nuclear deal with world powers.

Online videos apparently shot in Buqyaq included the sound of gunfire in the background. Smoke rose over the skyline and glowing flames could be seen a distance away at the Abqaiq oil processing facility. The Saudi-owned satellite news channel Al-Arabiya later aired a segment with a correspondent there as smoke from the blazes clearly rose behind.

The fires began after the sites were "targeted by drones," the Interior Ministry said in a statement carried by the state-run Saudi Press Agency. It said an investigation into the attack was underway.

Saudi Aramco, the state-owned oil giant, did not immediately respond to questions from The Associated Press.

Saudi Aramco describes its Abqaiq oil processing facility in Buqyaq as "the largest crude oil stabilization plant in the world."

The facility processes sour crude oil into sweet crude, then later transports onto transshipment points on the Persian Gulf and the Red Sea. Estimates suggest it can process up to 7 million barrels of crude oil a day.

The plant has been targeted in the past by militants. In an attack claimed by Al-Qaida in February 2006, suicide bombers with explosive-laden vehicles attempted to penetrate the processing plant, killing two security guards.

The two bombers also died in the attack, which failed to breach the compound, authorities reported at the time. In 2014, a Saudi court sentenced a man to death for links to the 2006 attack. Two other Saudis were jailed for 33 and 27 years respectively, state media reported.

The Khurais oil field, located 250 kilometers away from Dhahran is believed to produce over 1 million barrels of crude oil a day. It has estimated reserves of over 20 billion barrels of oil, according to Aramco.

There was no immediate impact on global oil prices as markets were closed for the weekend across the world. Benchmark Brent crude had been trading at just above $60 a barrel.

Buqyaq is some 330 kilometers (205 miles) northeast of the Saudi capital, Riyadh.

A Saudi-led coalition has been battling the Houthi rebels since March 2015. The Iranian-backed Houthis hold Yemen's capital, Sanaa, and other territory in the Arab world's poorest country.

The war has become the world's worst humanitarian crisis. The violence has pushed Yemen to the brink of famine and killed more than 90,000 people since 2015, according to the U.S.-based Armed Conflict Location & Event Data Project, or ACLED, which tracks the conflict.

Since the start of the Saudi-led war, Houthi rebels have been using drones in combat. The first appeared to be off-the-shelf, hobby-kit-style drones. Later, versions nearly identical to Iranian models turned up. Iran denies supplying the Houthis with weapons, although the U.N., the West and Gulf Arab nations say Tehran does.

The rebels have flown drones into the radar arrays of Saudi Arabia's Patriot missile batteries, according to Conflict Armament Research, disabling them and allowing the Houthis to fire ballistic missiles into the kingdom unchallenged. The Houthis launched drone attacks targeting Saudi Arabia's crucial East-West Pipeline in May as tensions heightened between Iran and the U.S. In August, Houthi drones struck Saudi Arabia's Shaybah oil field, which produces some 1 million barrels of crude oil a day near its border with the United Arab Emirates.

U.N. investigators said the Houthis' new UAV-X drone, found in recent months during the Saudi-led coalition's war in Yemen, likely has a range of up to 1,500 kilometers (930 miles). That puts the far reaches of both Saudi Arabia and the UAE in range.

Tensions in the Gulf have soared since May, with U.S. President Donald Trump calling off air strikes against Iran at the last minute in June after it downed a U.S. drone.

The mammoth IPO forms the cornerstone of a reform program envisaged by the kingdom's de facto ruler Crown Prince Mohammed bin Salman, a son of King Salman, to wean the Saudi economy off its reliance on oil.