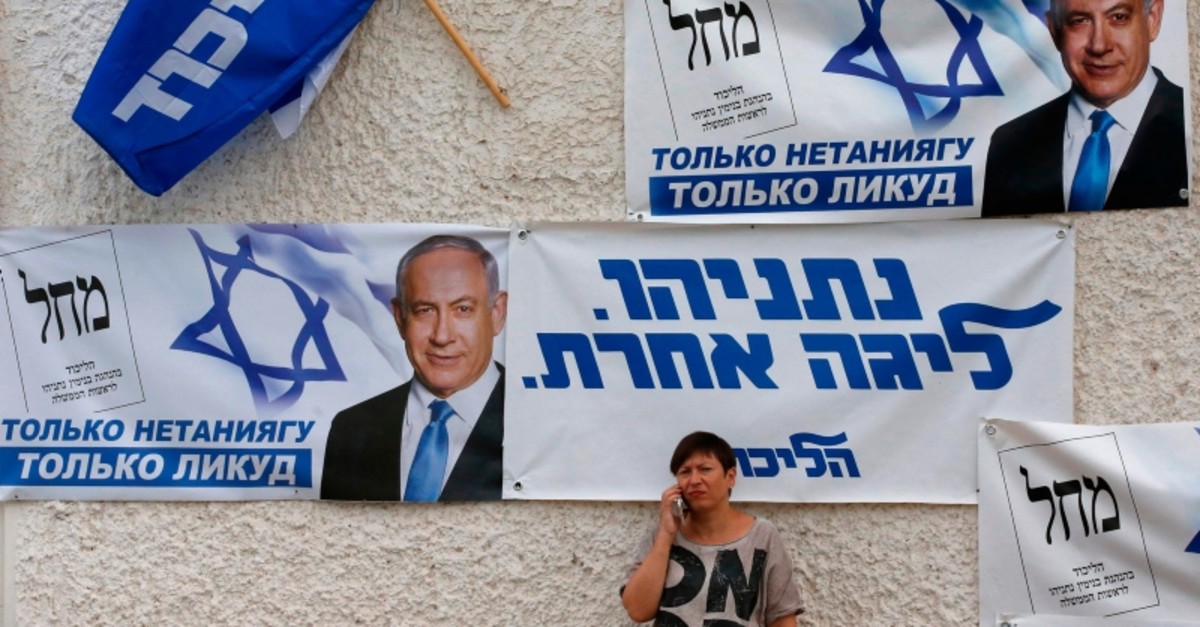 A woman talks on her mobile phone below banners for the Likud party showin chairman and Israeli Prime Minister Benjamin Netanyahu in the southern israeli city of Beersheva on Sept. 15, 2019. (AFP Photo)
by Compiled from Wire Services Sep 16, 2019 11:45 am
Israeli Prime Minister Benjamin Netanyahu vowed Monday to annex "all the settlements" in the occupied West Bank, including an enclave deep in the heart of the largest Palestinian city, in a last-ditch move that appeared aimed at shoring up right-wing support the day before a do-over election.

Locked in a razor tight race and with legal woes hanging over him, Netanyahu is fighting for his political survival. In the final weeks of his campaign he has been doling out hard-line promises meant to draw more voters to his Likud party and re-elect him in Tuesday's unprecedented repeat vote.

"I intend to extend sovereignty on all the settlements and the (settlement) blocs," including "sites that have security importance or are important to Israel's heritage," Netanyahu said in an interview with Israeli Army Radio, part of an eleventh-hour media blitz.

Asked if that included the hundreds of Jews in the occupied Palestinian city of Hebron, Netanyahu responded "of course."

Israelis head to the polls Tuesday in the second election this year, after Netanyahu failed to cobble together a coalition following April's vote, sparking the dissolution of parliament.

Netanyahu has made a series of ambitious pledges in a bid to whip up support, including a promise to annex the Jordan Valley, an area even moderate Israelis view as strategic but which the Palestinians consider the breadbasket of any future state.

Many members of the international community, including Turkey and the United Nations, have strongly condemned Netanyahu's pledges, saying they would enflame the Middle East and eliminate any remaining hope for a two-state solution.

"(Netanyahu's) embarrassing statement is a vile attempt to win a few more votes in the coming election at the expense of destroying the hopes of (achieving) a lasting peace in the Middle East," Turkish Foreign Minister Mevlüt Çavuşoğlu said Sunday, speaking at the emergency meeting of foreign ministers of Organization of Islamic Cooperation (OIC) held in Saudi Arabia's Jeddah.

In its final communique on Sunday, the OIC summit condemned Israel's colonial policies in occupied Palestine and all attempts to change the demographic composition through illegal settlements.

The statement also condemned Israel's forced displacement of Palestinian citizens in violation of international humanitarian law, calling these criminal acts a threat to international peace, security and stability in the Middle East and the world.

It slammed Israeli Prime Minister Benjamin Netanyahu's stated intention to "apply Israeli sovereignty on all of the Jordan Valley, northern Dead Sea and settlements in the occupied West Bank," describing it as a dangerous escalation, a further serious encroachment on the historical and legal rights of the Palestinian people, and a flagrant breach of the UN Charter and international law.

It called on the international community to take all measures required to confront Israel "including boycotting and imposing economic and political sanctions."

It urged all OIC member states to raise the issue of Palestine and the illegitimate Israeli occupation during the 74th U.N. General Assembly next week.

It said peace and security in the Middle East could not be achieved without a full Israeli withdrawal from the 1967 occupied territory of Palestine, including Jerusalem.

Israel captured the West Bank and East Jerusalem from Jordan in the 1967 war.

Over 2.5 million Palestinians now live in occupied territories, in addition to nearly 700,000 Jewish settlers. Israel already has annexed east Jerusalem in a move that is not internationally recognized. The international community, along with Palestine, overwhelmingly considers Israeli settlements in the West Bank and East Jerusalem illegal.

Tuesday's vote will largely be a referendum on Netanyahu, who this year surpassed Israel's founding prime minister as the country's longest-serving leader.

He has cast himself as the only candidate capable of facing Israel's myriad challenges. But his opponents say his legal troubles — including a recommendation by the attorney general to indict him on bribery, fraud and breach of trust charges — loom too large for him to carry on.