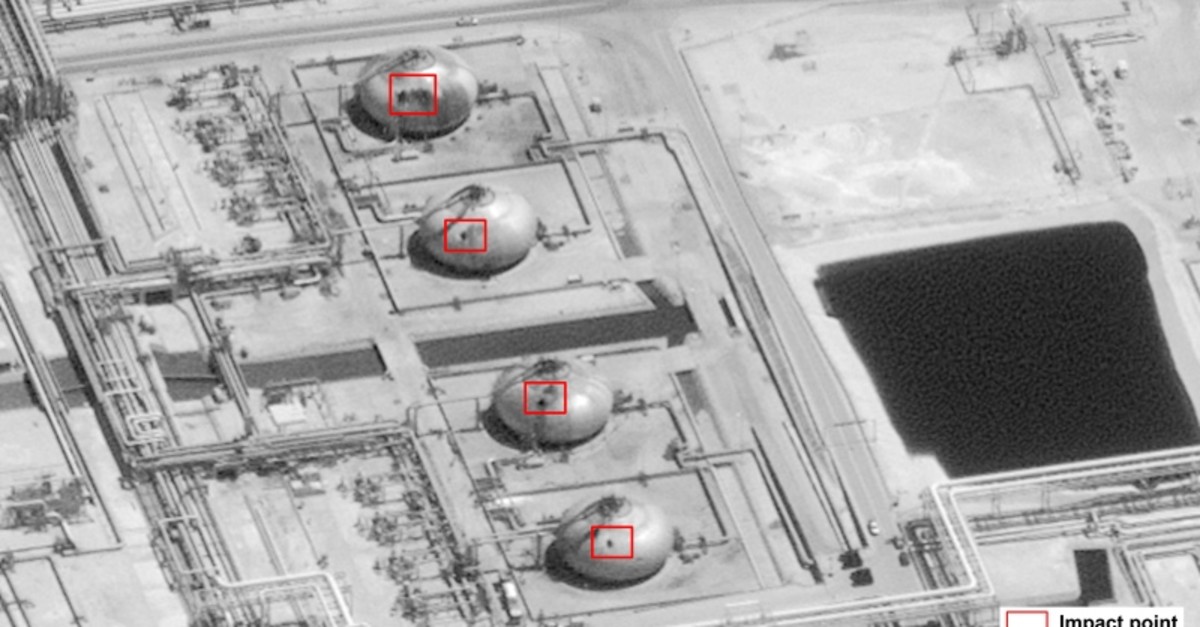 This image provided on Sunday, Sept. 15, 2019, by the U.S. government and DigitalGlobe and annotated by the source, shows damage to the infrastructure at Saudi Aramco's Abaqaiq oil processing facility in Buqyaq, Saudi Arabia. (AP Photo)
by Daily Sabah with Agencies Sep 16, 2019 4:35 pm

The U.S. government on Sunday produced satellite photos showing what officials said were at least 19 points of impact at two Saudi energy facilities, including damage at the heart of the kingdom's crucial oil processing plant at Abqaiq.

U.S. officials said the images demonstrate the accuracy and sophistication of the attack. Seventeen of the 19 impact points occurred at the Abqaiq complex. 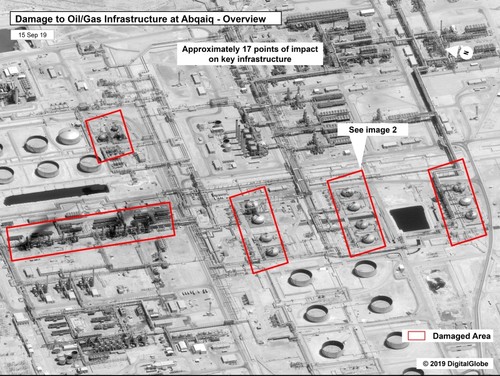 One photo shows similar puncture marks on four spherical tanks at the refinery, testifying to the precision of the strike. The tanks are part of the critical process of removing the highly-corrosive chemical hydrogen sulfide from crude before it can be processed. Hijacking the removal process cripples the refinery's ability to process crude oil.

In a close-up photo of the Khurais oil field near Abaqaiq, damage to a processing plant can be seen, as well as burn marks on the ground from the fire that resulted from the attack, the U.S. assessment noted. 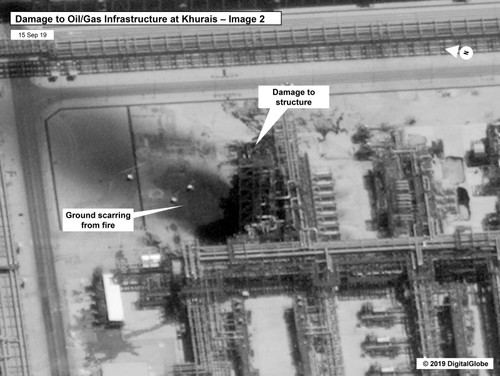 The U.S. administration released the photos as evidence backing its accusations that Iran was behind the attacks. Officials said the photos show impacts consistent with the attack coming from the direction of Iran or Iraq, rather than from Yemen to the south.

U.S. Secretary of State Mike Pompeo has blamed Iran for the attack Saturday on key Saudi oil infrastructure. On Sunday, senior U.S. officials again said the American government believes there is no doubt Iran was responsible, saying satellite imagery and other intelligence, show the strike was inconsistent with one launched from Yemen, where Iranian-backed Houthi rebels had claimed responsibility.

Iran, meanwhile, called the U.S. claims "maximum lies," while a commander in its paramilitary Revolutionary Guard reiterated its forces could strike U.S. military bases across the Mideast with their arsenal of ballistic missiles.

Iraq denied Sunday that its territory was used for an attack on the Kingdom and U.S. officials said a strike from there would be a violation of Iraq's sovereignty.

The U.S. officials said additional devices, which apparently didn't reach their targets, were recovered northwest of the facilities and are being jointly analyzed by Saudi and American intelligence. The officials, who spoke on condition of anonymity to discuss intelligence matters, did not address whether the drone could have been fired from Yemen, then taken a round-about path, but did not explicitly rule it out.

The attacks and recriminations are increasing already heightened fears of an escalation in the region, after a prominent U.S. senator suggested striking Iranian oil refineries in response to the assault, and Iran warned of the potential of more violence.

President Donald Trump tweeted Sunday that the U.S. is "locked and loaded" to respond to the drone assault, following a National Security Council meeting at the White House.

A U.S. official said all options, including a military response, were on the table, but added that no decisions had been made. The official spoke on the condition of anonymity to discuss the internal deliberations.