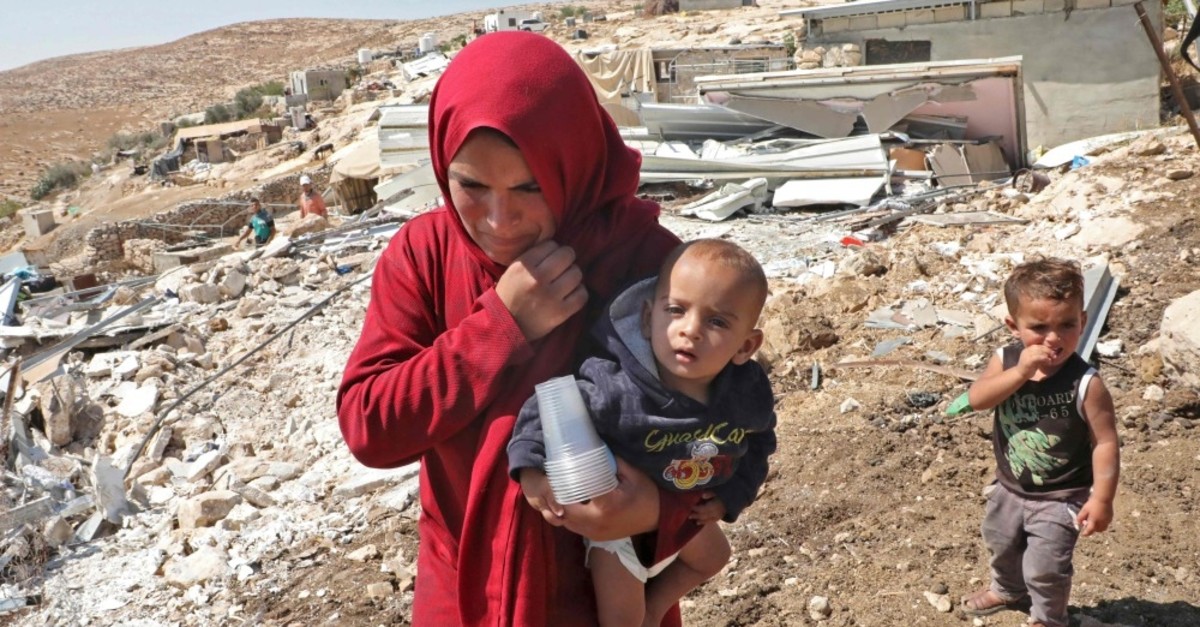 A Palestinian woman carries a child past wreckage of mobile homes destroyed by Israeli forces in the occupied West Bank, Sept. 11, 2019.
by Daily Sabah with Agencies Sep 17, 2019 12:08 am

As more than two million Palestinians in the occupied West Bank don't have a say in the do-over elections, their future is at stake with Prime Minister Benjamin Netanyahu's unending annexation plans

The 2.5 million Palestinians in the occupied West Bank have no voice in choosing Israel's next government and no control over whether it decides to annex part or all of the occupied territory, as Prime Minister Benjamin Netanyahu has made a series of ambitious pledges in a bid to whip up support before today's election.

With the peace process having sputtered to a halt a decade ago, they also have little hope of getting a state of their own anytime soon.

Netanyahu issued a last-minute pledge to annex "all the settlements" in the West Bank, including an enclave deep in the heart of the largest Palestinian city, if re-elected, which many saw as a play for vital right-wing nationalist votes. "I intend to extend sovereignty on all the settlements and the [settlement] blocs," including "sites that have security importance or are important to Israel's heritage," Netanyahu said in an interview with Israeli Army Radio, part of an 11th-hour media blitz.

Asked if that included the hundreds of Jews who live under heavy military guard amid tens of thousands of Palestinians in the volatile city of Hebron, Netanyahu responded "of course." His intention could effectively end any remaining hopes for a two-state solution to the Israeli-Palestinian conflict. The question of what to do with the West Bank, which Israel captured in the 1967 war and would be the heartland of any future Palestinian state, once dominated Israeli elections. Netanyahu's move, along with the potential publication of the U.S. "peace plan" after today's vote, has raised the stakes for Palestinians reacting with anger. Palestine Liberation Organization (PLO) official Hanan Ashrawi accused Netanyahu of "not only destroying the two-state solution" but also "destroying all chances of peace." Gaza's Hamas rulers also said Netanyahu's annexation plans "neither change reality nor stop the resistance of our people against the Israeli occupation and schemes."

Right-wing candidates argued that Judea and Samaria, the biblical name they use for the occupied territory, was an integral part of Israel. Candidates on the left said the failure to create a Palestinian state there would eventually lead to a one-state outcome in which Palestinians would outnumber Jews and demand the right to vote, spelling the end of Israel as a Jewish state. But that debate has faded in recent years, and has hardly featured in the campaign ahead of the election. Netanyahu's main rivals have dismissed his talk of annexation as a campaign stunt but have not opposed it on the merits. They have also vowed to be much tougher toward Hamas in the Gaza Strip, accusing Netanyahu of being too soft in the face of Palestinian rocket fire. His main rival, former Israeli army chief of staff Benny Gantz, has boasted of his role in the 2014 Gaza war, saying he sent parts of Gaza back to the "stone age."