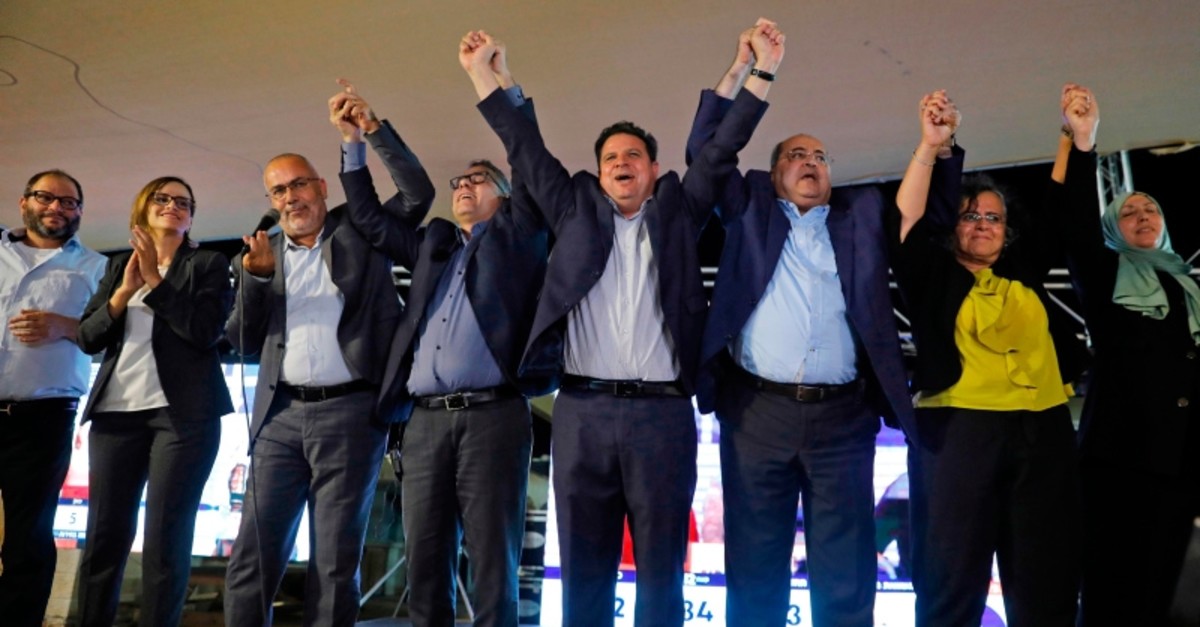 Joint List candidates celebrate before supporters at the alliance's campaign headquarters in the northern Israeli city of Nazareth on September 17, 2019, as the first exit polls are announced on television. (AFP Photo)
by Associated Press Sep 18, 2019 8:02 pm

Israel's Arab coalition appears poised to emerge as the main opposition bloc following Tuesday's election, a historic first that would grant a new platform to a long-marginalized minority.

With more than 90% of votes counted Wednesday, the Joint List was expected to win about a dozen seats in the 120-member assembly, coming third after the Blue and White party of former military chief Benny Gantz and the right-wing Likud party of Prime Minister Benjamin Netanyahu.

In absolute terms, the Arab bloc appears to have repeated its performance in 2015, when it won 13 seats.

But this time around, due to the shifting constellation of Israeli politics, it would be well-placed to lead the opposition if a national unity government of the two largest parties is formed, as seems likely.

That would put a representative of Israel's Arab citizens closer to the center of power than ever before and strengthen their ability to influence the national agenda.

Israel's Arab minority makes up about 20% of the population of nine million, and is descended from Palestinians who stayed in Israel after it was established as a state in 1948. They officially enjoy full citizenship, including the right to vote, but they lived under martial law until 1966 and still suffer widespread discrimination.

Decades of marginalization have bred voter apathy, and in April's elections more than half the Arab electorate stayed home. This time around, Arab leaders joined forces and mobilized turnout, vowing to topple Netanyahu and push for improvements in public services.

Arab citizens have close family, cultural and historical ties to Palestinians in the occupied West Bank and Gaza, and largely identify with the Palestinian cause. That has led many Israelis to view them as a fifth column and a security threat. Netanyahu has repeatedly branded them as terrorists and traitors in a bid to energize his right-wing base, in remarks widely condemned as racist incitement.

In the closing hours of the 2015 elections, Netanyahu warned that Arabs were voting in "droves." This time around, he pushed for the placement of cameras at polling stations in Arab districts based on unfounded claims of widespread fraud, saying Arabs were trying to "steal" the election. Facebook suspended an automated chat function on his account for 24 hours last week after it published a post saying, "Arabs want to annihilate all of us."

Netanyahu appeared to double down in his election-night speech, saying no Israeli government could include "anti-Zionist Arab parties" that "reject the very existence of Israel as a Jewish and democratic state" and "praise bloodthirsty terrorists who murder our soldiers, citizens and children."

Just before the elections, Netanyahu also pledged to annex Jordan Valley, in addition to all illegal settlements in West Bank, prompting an international outcry.

Netanyahu's tactics appear to have backfired.

The increased turnout among Arab voters propelled the bloc to a strong showing and may have denied Netanyahu the right-wing coalition he had desperately sought.

"There is no other prime minister who incited against us like Netanyahu," Ayman Odeh, the leader of the Joint List, told Israeli media as the initial results trickled in. "There's a limit. The Arab citizens undoubtedly felt that they became a persecuted minority, an endangered minority."

The Joint List is unlikely to sit in any Israeli government because that would entail endorsing military operations against the Palestinians. Many Jewish-majority parties still refuse to sit with Arabs as political partners.

But the Arab parties' increased clout could allow them to block right-wing legislation like the law narrowly passed last year defining Israel as the nation-state of the Jewish people. An informal alliance supporting the ruling coalition from the outside could also help deliver legislation to improve housing, education and law enforcement in long-marginalized Arab communities.

The Arab bloc is also expected to advocate for a two-state solution to the conflict with the Palestinians at a time when none of Israel's main parties has made the peace process a priority.

Unofficial results, which were released late Tuesday, estimated the Joint List could get as many as 13 seats, a result that would make them the third largest party in the Israeli parliament.

Neither Gantz nor Netanyahu have enough support to form a government without the Yisrael Beitenu party led by Avigdor Lieberman, who has emerged as kingmaker.

Lieberman, a right-winger with a history of incendiary remarks about Arabs, has demanded a national unity government with Likud and Blue and White. That would leave the Joint List as the largest party outside the government and make Odeh Israel's first-ever Arab opposition leader.

In his official duties as opposition leader, Odeh would hold monthly consultations with the prime minister and meet with visiting dignitaries. He would be granted a state-funded bodyguard, access to high-level security briefings and an official platform to rebut the prime minister's speeches in parliament.

"This is a very significant, unprecedented level for us," Odeh told Army Radio. "When presidents from around the world come they'll meet with us as well." He has described the prospect of an Arab leader receiving security briefings as "interesting."

Odeh says his bloc also mobilized support from Israeli Jews, some of whom welcomed its success.

Gantz and Odeh were in contact for a meeting, Mansour Abbas, a member of Knesset told Anadolu Agency on Wednesday. Abbas said that "they are still considering recommending that President Reuven Rivlin give Gantz the first crack at forming a government."

The list won't join any government that keeps the occupation imposed on the West Bank, East Jerusalem and Gaza, said Abbas.

He also added that "the [Israeli] government must end the Nation-State Law" in addition to "several demands and life improvements" for the people of Israel.

Abbas noted that still there might be specific possibility to deal with the upcoming government in which their principles are not affected, and said: "No Arab could join a government with what it does in Jerusalem and Gaza."

Nahum Barnea, a prominent columnist with Israel's main daily Yedioth Ahronoth, said the Joint List's achievement should be measured not in the number of seats it won but in "its ability to build bridges to the mainstream of Israeli politics and society."

"It is unthinkable to continue to exclude and to humiliate forever 20% of the electorate," he wrote. "Their expectations in all that pertains to integration, influence and respect all emanate from the ground up. Those expectations have to be met somehow."