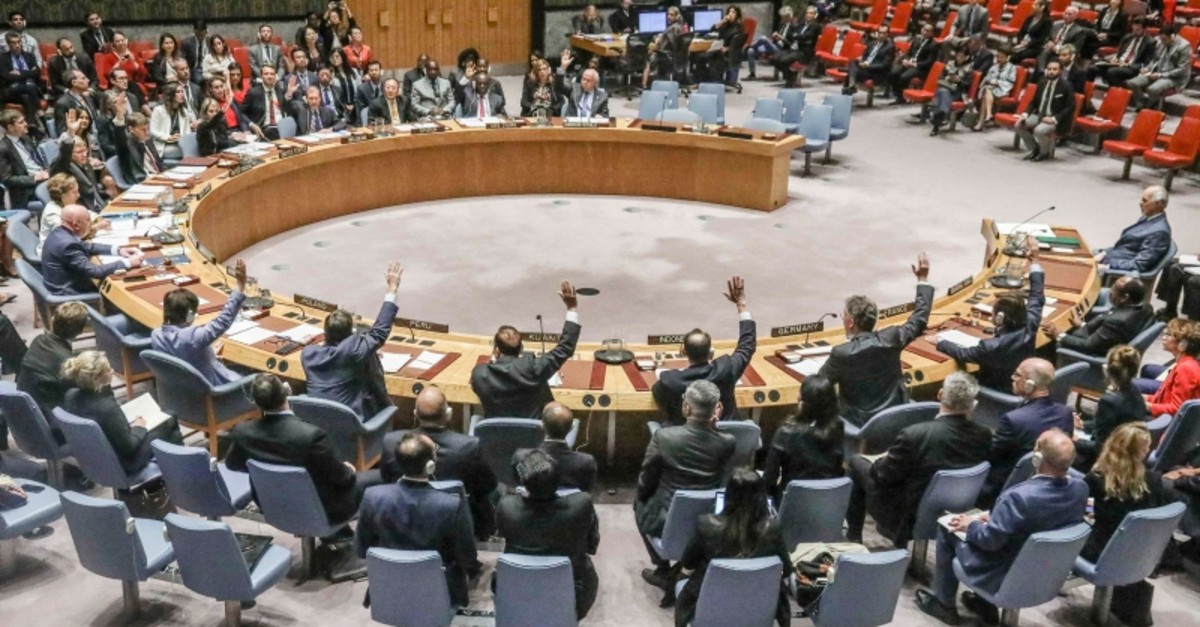 United Nations Security Council vote on a humanitarian draft resolution for Syria, which fail to gain the support of Russia and China, Thursday Sept. 19, 2019 at U.N. headquarters. (AP Photo)
by Sep 20, 2019 12:53 am

Since the start of the Syrian conflict in 2011, Russia has used its veto power 13 times at the U.N. Security Council to block actions directed at its Syrian ally.

Britain, China, France, Russia and the United States are permanent Security Council members with veto powers. The other 10 members are elected for two-year terms on a rotating basis.

U.N. resolutions require nine positive votes and no veto to be adopted.

Here's a look at Russia's 13 vetoes on Syria:

On February 4, 2012 Russia and China again veto a draft resolution that condemns a Syrian regime crackdown on the opposition, while the Security Council's other members vote in favour.

The veto sparks an international outcry.

On July 19, 2012, Beijing and Moscow again veto a Western-backed resolution that threatens Damascus with sanctions if it does not stop using heavy weapons.

On May 22, 2014, Beijing and Moscow block a French-drafted proposal for the Security Council to refer Syrian crimes to the International Criminal Court (ICC).

On October 8, 2016, Russia alone vetoes a text proposed by France to halt the bombing of Aleppo. China abstains in that vote, the first time it does not veto a Syria draft resolution alongside Russia.

On December 5, 2016, a resolution that calls for a truce in Aleppo is vetoed by both China and Russia.

On February 28, 2017, Russia and China again veto a resolution, drafted by Britain, France and the United States that would have imposed sanctions on Syria over chemical weapons use in the conflict.

On April 12, 2017 Russia vetoes a draft resolution demanding that Assad's regime cooperate with an investigation into the deadly suspected chemical attack in the rebel-held town of Khan Sheikhun on April 4. China abstains.

On October 24 and November 16-17, 2017, Russia uses its veto three times in less than a month to block draft resolutions on renewing a U.N.-led probe of chemical weapons attacks in Syria.

On April 10, 2018, Russia vetoes a U.S.-drafted resolution to investigate chemical weapons use in Syria aimed at identifying the perpetrators.

On September 19, 2019, Russia and China veto a resolution drafted by Belgium, Germany and Kuwait, calling for a ceasefire in Syria's war-torn Idlib province.

The Assad regime has been conducting a bloody four-month-long campaign to wrest Idlib province from opposition forces. The Syrian Observatory for Human Rights says the offensive has killed close to 1,000 civilians.