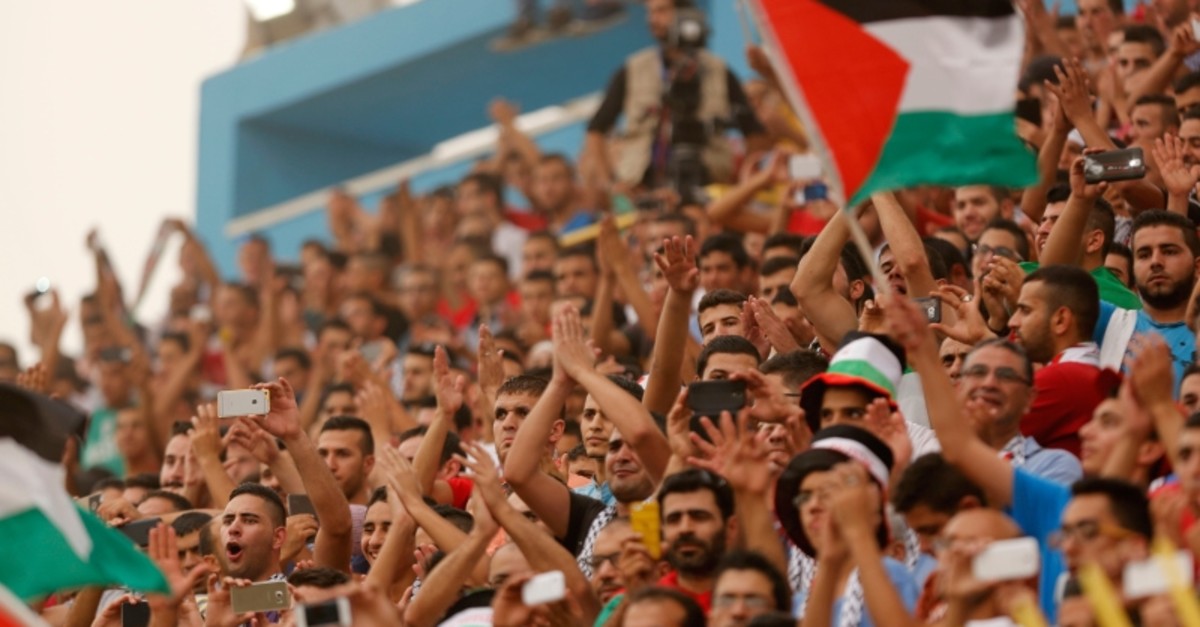 In this Sept. 8, 2015 file photo, Palestinian fans cheer during a World Cup soccer qualifying match between the Palestinian and the UAE teams at the Faisal al-Husseini stadium in the West Bank town of Al-Ram. (AP Photo)
by Associated Press Sep 23, 2019 3:53 pm

Israel has denied travel permits to most players on a Gazan football team which had hoped to cross through Israel and into the West Bank to play a local championship final against a rival Palestinian club.

Khadamat Rafah is set to play Balata FC in the West Bank on Wednesday. But without the hard-to-obtain Israeli travel permits, the game is unlikely to take place as scheduled.

"We think that this is clear evidence that this Israeli occupation is cruel but from our side we keep raising it at all the levels of FIFA. We insist that this is our right and we'll continue exerting every effort to allow this team to do this match," the head of the Palestinian Football Association, Jibril Rajoub, told The Associated Press.

The football team's predicament highlights the daily difficulties Gazans face under an Israeli-Egyptian blockade, imposed after the Islamic militant group Hamas seized control of the territory in 2007. Citing security grounds, Israel has greatly restricted movement of Gazans and requires travelers such as students and medical patients to obtain permits to leave.

Critics say these are increasingly harder to come by and are withheld arbitrarily. Israel disputes this and says it grants tens of thousands of permits for Gazans with no militant ties.

Rajoub said his association has long lobbied FIFA to sanction Israel for what it says are its efforts to restrict the movement of Palestinian players. He slammed the withholding of permits and pledged to hold the game.

Under the Palestinian Football Association's terms, the winners of the Gaza league play the West Bank champions in a two-leg final, one in the Gaza Strip and one in the West Bank. The Gaza game took place earlier this year and this week's game, which had already been delayed for two months over access to permits, was to take place near the West Bank city of Nablus.

The winner of the final game goes on to compete in the Asian Champions League.

Following the Gaza game, Khadamat Rafah had attempted for two months to obtain permits but its two requests were denied, except for a handful of club members.

"We are a club carrying messages of love and peace and have no security activities as the occupation (Israel) claims," said Hozayfa Lafi, Khadamat Rafah's spokesman.

Gisha, an Israeli rights group that had challenged the move in court, criticized Israel's permit system.

"The ease with which the state labels Palestinians as a security threat turns out to be time and again an arbitrary and sweeping act, while in the best case ignoring the serious harm that is dealt to the fabric of civilian life in the Palestinian territory," said Gisha.

A court in Jerusalem upheld the state's decision on Monday.

In a statement, Israel's Shin Bet domestic security agency, which screens permit requests, said a security check turned up information pointing to "most" of the team's "links to terrorism." That, coupled with heightened security threats from the Gaza Strip, prompted the agency to recommend the players be prevented entry.

The Palestine Cup had been suspended for years until 2016 when FIFA reached understandings between Israel and the Palestinians over the movement of athletes.